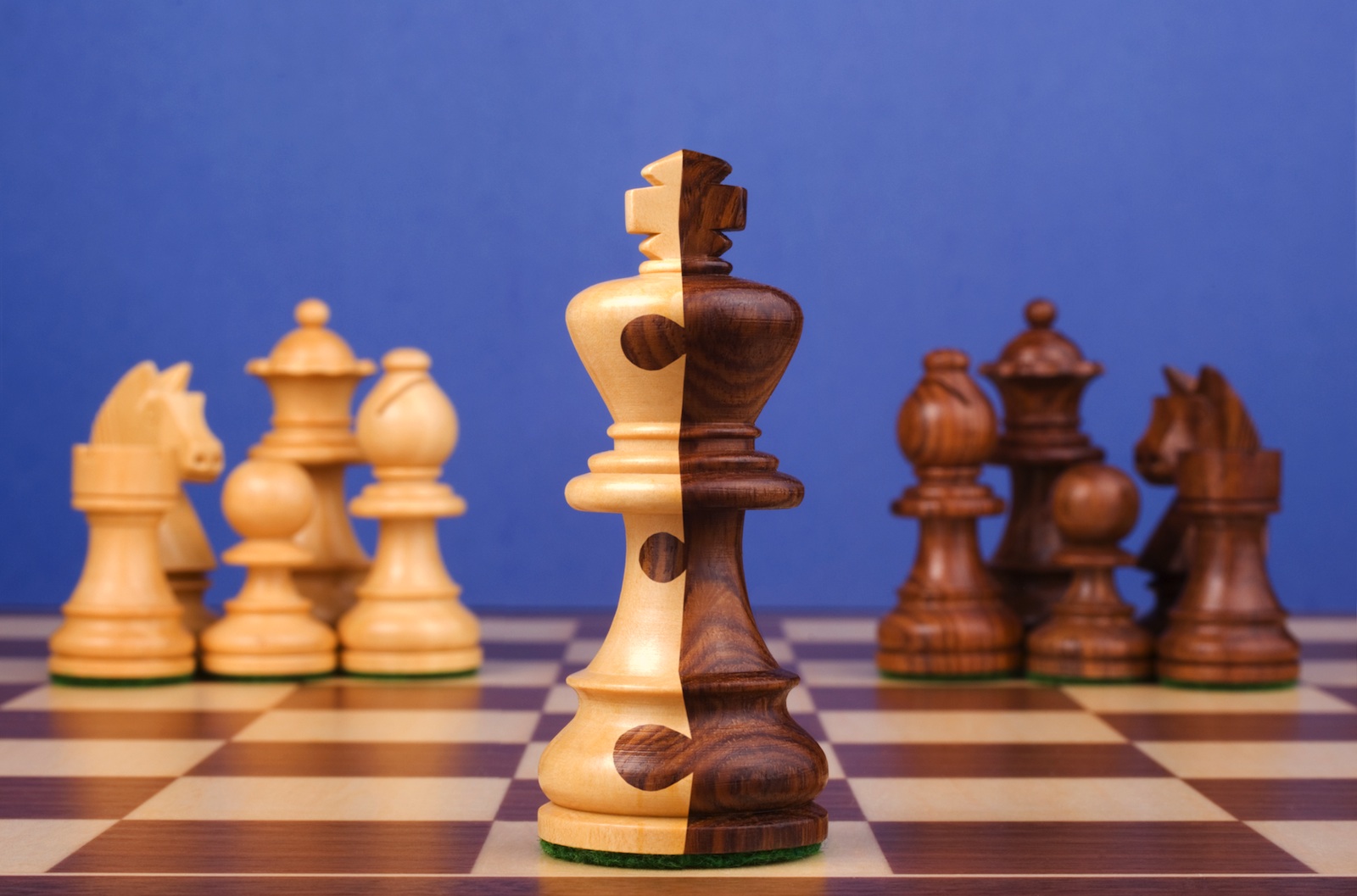 Realising long-term benefits from a merger is much harder than obtaining short-term gains. As industry consolidation continues, insurers that learn from experience will have a big advantage.

In Emphasis 2000/1, we reported on a study of UK insurance companies (mostly life insurers) that had participated in a merger or acquisition during the past five years. The study, which examined each M&A transaction from beginning to end, focused on post-merger integration — the stage that demanded the greatest effort and resources. 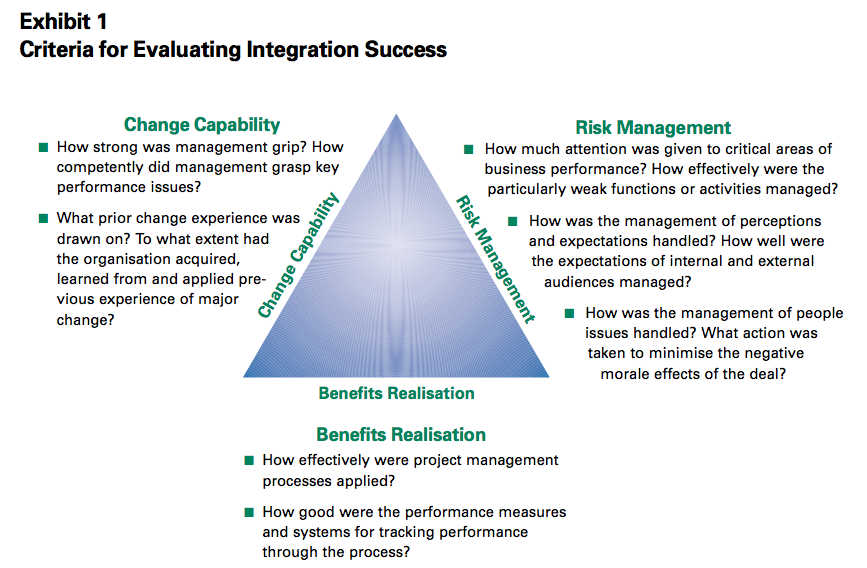 Key Findings of the M&A Study

Based on the experiences of the participants, one can draw the following conclusions:

■ Achieving Short-Term Benefits Is Relatively Easy. Each company expected its M&A deal to provide significant opportunities to reduce overhead costs and at least some chance to expand an existing distribution channel. And, in fact, most insurers were relatively successful in obtaining the desired short-term benefits (i.e., overhead cost reductions, channel integration and stability of the ongoing operation).

Success derived from organisational capabilities and deals that were suitable to both parties. Some deals of similar potential failed to deliver cost reduction or channel fit benefits because of the lack of these capabilities and the inability to create a single unified management team.

■ Success in Achieving Long-Term Benefits Is Hard to Determine. Measuring success in achieving long-term benefits (defined as sustained reductions in unit cost and the incorporation of “best-of-both” capabilities) poses a real challenge. Companies and operating conditions are constantly changing, and over time it becomes increasingly difficult to attribute different effects to specific events. This is particularly true with respect to unit cost measurement (which is a composite measure) and sales performance (which is also an outcome of many feeds or inputs, e.g., product range, remuneration and management processes).

It is likely that achieving significant further reductions in unit costs would require a rationalisation of the product lines in the in-force portfolio. This means reviewing and changing terms and conditions so that the in-force product set is reduced and the associated administration is simplified. This has rarely been seen in the UK but has been successfully carried out in Australia.

One measure of the lasting results of a merger is the assimilation of new capabilities from the acquired company. The acquiring management usually identifies the capabilities it wants to obtain (e.g., in product development or in the management of a channel) at the outset of the deal. In many cases, companies could determine that these capabilities had been incorporated. For some participants, it was too early to know whether the capabilities had been assimilated into the acquiring company. For the others, evaluation proved too difficult. In the latter cases, however, management sensed it had not fully obtained the benefits.

■ Speed of Decision-Making and Implementation Are Crucial to Success. The integration of two companies ushers in a period of great uncertainty and distraction for all concerned. Being absorbed for too long in the process of integration exposes the new organisation to loss of real momentum in the marketplace. Most decisions are not materially improved by deliberating too long or by revisiting them. Typically, the successful examples of complex integration took no more than 12 months (from the date the transaction was effected) to complete 90% of the integration effort.

■ Having Clear Objectives Will Greatly Improve the Chances of Success. Companies can develop a clear set of objectives by preparing a detailed merger strategy, identifying targets in advance of any particular opportunity. Although advance analysis is important, it does not ensure success.

Analysing a specific opportunity before committing to the deal is also effective. One acquirer that had previously ruled out an acquisition strategy was forced, on short notice, to consider a specific acquisition opportunity. Management compensated for the lack of a prepared strategy by conducting an intensive analysis, which validated the rationale for the acquisition before it committed to the deal. This rationale provided the basis for defining clear management accountability for benefit delivery in the integration process.

Another company had concluded that it needed to gain critical mass in its direct sales force to survive and saw an acquisition as the only practical means of achieving this. Yet it did not conduct further analysis at this point. When a suitable candidate for acquisition appeared, it mustered the resources necessary to make an intensive assessment of the opportunity.

Advance analysis has limited value if the rationale is not carried through to implementation. A common problem in mergers and acquisitions is the failure to ensure adequate continuity of purpose from evaluation through implementation. Companies often lose sight of their original objectives.

■ Almost All Companies Aspired to a Best-of-Both Approach to Implementation. Such an approach creates an air of impartiality, reassuring the staff of the acquired company. It also protects against discarding valuable capabilities and missing opportunities for improvement.

On the other hand, in a best-of-both approach, one must manage expectations in what is often a subjective area, which is not easy. For example, in an extreme case, determining “fairly” which of the two incumbents in the same role pre-integration is best suited for the role post-integration might require giving both a trial, which is almost impossible in practice. And if expectations are not managed well, business morale will suffer. The alternative may be to acknowledge explicitly that there is a dominant party in the merger, that not all roles in the new organisation will be open but that all reasonable efforts will be made to find alternative posts or to agree on severance terms.

A Case Study of a Successful Merger

A large UK multichannel life and pensions company, part of a multinational group, had the opportunity to acquire a medium-sized competitor, which also had a number of distribution channels. After an intensive evaluation exercise (designed to quantify the potential for synergy and for loss of business due to channel overlap), it went ahead with the deal.

Recognising it lacked experience with post-merger integration, the acquirer sought outside help designing and managing a process to determine the best approach to integrate the businesses. The acquiring company had prior experience with change programs, particularly a major cost-efficiency exercise and systems development program, and thus had built up a strong project management capability.

Furthermore, because the UK CEO of the acquiring organisation passionately believed in the need for sharply defined accountability, he negotiated with the overall group CEO for a free rein to manage the integration. He wanted clear responsibility for the delivery of benefits, which had been crudely quantified in the earlier analytical exercise. These benefits became the goals to be achieved. Thus, measuring the effectiveness of the program to deliver the merger benefits was a crucial requirement.

The company embarked on a three-month analysis and design exercise, assembling an integration team of 100 people in one location. This group was accountable to the UK CEO for quantifying the benefits more precisely. The entire process was extremely rigourous and demanding for all involved. The integration team then handed over the integration plan to line managers, many of whom had been engaged in the design process.

The supervisory structure that had been established for the duration of the planning remained in place through the first nine months of actual integration. Push back on the benefits from one area had to be thoroughly and comprehensively justified, and ultimately was permitted only if there were compensating benefits elsewhere.

After 12 months, the bulk of the integration effort had been achieved. Apart from a small diminution in new business during the 12-month period, the company had substantially realised the benefits and the managing director kept his job.

In retrospect, however, the CEO and fellow senior directors identified a number of areas where they had done less than what had been needed. For example:

■ Management underestimated the huge demand for HR skills and resources, which were essential for the facilitation and selection processes and for providing advice on combining pay and benefits. It also overlooked the more subtle need to support, counsel and coach line managers, who had to supervise the integration of their functions in a very difficult climate.

■ Management expected a high degree of stress and discomfort during the integration process as staff came to terms with redundancies and displacements. But the actual experience was more wrenching emotionally than management had assumed. Management later realised that it could have mitigated some of the angst by acknowledging that one partner was dominant (rather than promising a best-of-both approach) and basing its internal communications and decisions on that fact. In addition, members of the management team would have benefited from advance coaching on handling difficult situations.

The company successfully managed the first phase of the integration process and now needs to look at how to achieve the second-phase benefits — the long-term reduction in unit costs.

This company was participant No. 3 in the M&A study. Exhibit 2 shows how it rated on the key capabilities needed for integration success. 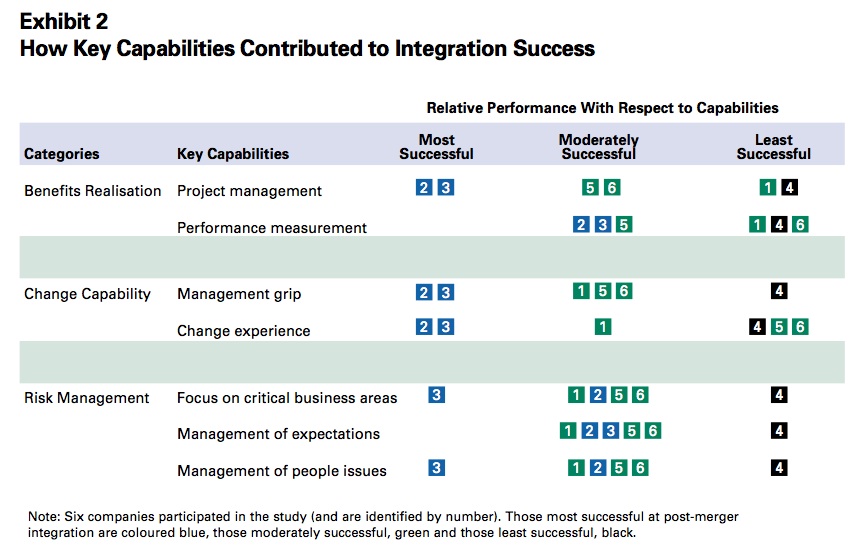 Because every deal is different, management must base its approach on its specific objectives, the nature of the merger and its capabilities in the areas of project management and change management. Having a clear picture of one’s objectives improves the prospects for success. But above all, quick decision-making and effective implementation are crucial. Strong leadership, tight planning and good project management will achieve this.

Clearly, companies learn by doing. This is reflected not only in the approach to project management, but also in the ability to judge what is critical, what is important and what is less important.

Consolidation will continue in the life insurance industry in all established markets, and companies that can learn from their M&A experiences will have an advantage over others. Although as more and more companies become adept at M&As, they may end up bidding up the price against each other. In effect, companies that are confident about their abilities to secure merger benefits will lower the discount rate they apply to valuing the cost synergies — either explicitly or implicitly — thereby increasing the price they are prepared to pay. In short, to make M&As work, companies will have to get much better at achieving the softer, long-term benefits.