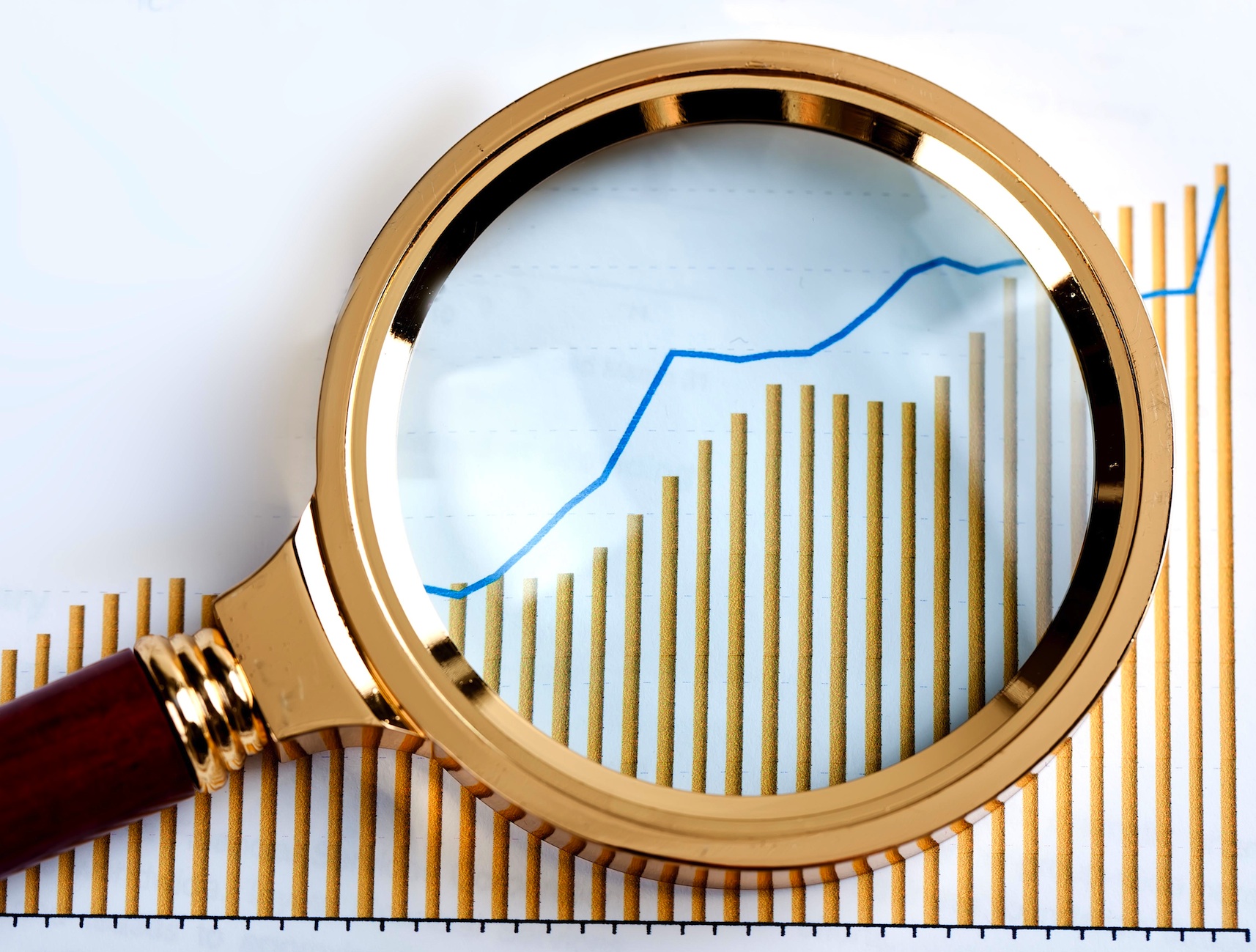 We believe that nine key themes are driving high levels of M&A activity in asset and wealth management. While some are expected to impact the near term, others will shape future deal activity.

Merger and acquisition activity among US asset and wealth managers has recently reached levels matching previous peaks. There are sound strategic reasons for this upsurge. Firms are seeking to reposition themselves and protect profitability in the face of shifting customer demands, rising regulation and the need to embrace technology.

The number of deals in 2015 rose by 65% to 142 compared with the previous year, although total deal value fell short of the previous year. The themes below show the strategic rationale for mergers continues. But much will depend on market volatility.

• Record year for independent manager deals: After sitting on the side lines for over five years after the financial crisis, independent asset managers finally returned to the deal markets in 2015. Following in the footsteps of the private equity (PE) firms which sold a large number of firms the year before, this was the year they came back to the deal tables. The 142 deals announced was the largest number in the sector for 10 years. It compared to 86 deals in 2014 and 105 deals in 2007, which was the second highest level of deal activity over the last 10 years. Whether or not this trend continues depends on how buyers and sellers react to market volatility as well as regulatory uncertainties. We expect eager buyers and sellers with strategic rationale will press ahead, maybe using contingent purchase price mechanisms. But less certain buyers and sellers may wait for a more stable environment.

• Turbulent stock markets and economic uncertainty: Most of the major global indices struggled to post positive returns in 2015. Markets were turbulent in the second half of the year, unsettled by weak economic growth, significant market drops in China, uncertainty around the timing and quantum of interest rate hikes and falling commodity prices. These factors impacted investment returns as well as the capital deployed by investors. We expect such headwinds to continue in 2016. Deal volumes and the number of mega deals will depend on the severity of these factors. However, we expect smaller strategic deals will continue.

• Valuations have come down slightly: Deal valuations took a beating due to the volatility in global equity markets and higher level of uncertainty in many of the industry’s sub-sectors. As we reported in 2014, deal valuations stabilised but varied from transaction to transaction, depending on the acquisition candidate’s characteristics (growth prospects, profitability, size, synergies, etc.) and the deal’s potential risk factors. Price dispersion remained high in 2015 while valuations moved lower to between four and 15 times EBITDA (after elimination of some outliers, particularly the robo-advisor and small ETF deals). Also, the level of uncertainty in transactions caused buyers to push for more earn-out arrangements.

• Continued consolidation across all sub-sectors: Asset management margins are being threatened by fee pressures from clients and overall expense control and transparency demands from clients, fund boards and regulators. What’s more, increased spending on regulatory compliance and reporting, as well as technology, is putting further pressures on margins. Consolidation has achieved cost synergies, as well as fulfilling other strategic or growth objectives. The two key strategic reasons driving consolidation have been expansion of product offerings and development of multi-asset capabilities to serve client needs. Additionally, managers that have struggled to differentiate themselves are looking to merge with others, hoping the combined firm’s resources will do so. These trends have affected smaller independent managers most of all, which is why there are so many mergers.

• Changing investor demands: Shifting investor demands are significantly affecting assets under management. While US equity mutual funds lost $170 billion of assets in 2015, exchange-traded funds (ETFs) attracted $231 billion of net new cash flows during the 11-month period to December 2015. We expect ETF assets to reach $7 trillion by 2020. In addition, there are a growing number of investors looking for solution-based multi-asset class managers, which can produce goal oriented returns vs. absolute returns against a benchmark.

It is possible that medium-to-large managers may want to diversify and build out multi-asset capabilities through M&A.

• Minority interest deals: Minority interest deals continue to remain popular among both buyers and sellers. Specialist platforms have raised several billions of dollars in recent years and have been acquiring minority equity interests in successful alternative managers. Such deals benefit buyers by providing access to fast-growing managers and diversification of investment; sellers benefit from liquidity without losing control, as well as access to a strategic partner that can accelerate growth through distribution strength and product development expertise. We expect minority deal activity to continue to be robust – both as new players enter the minority investment market and existing players deploy the significant capital already raised.

• Private equity firms were busy as the buyers and the sellers of asset managers: In 2015, PE firms were active buyers and sellers, executing a large number of mega deals. Three out of the top five disclosed deals involved PE firms. The level of deal activity demonstrates this savvy group of buyers’ belief in the opportunities presented within the asset and wealth management sector.

• New technology: There was an increased number of M&A deals to acquire technology targets, particularly in the robo-advisor space. As noted in PwC’s Asset Management 2020 publication, entitled ‘A Brave New World,’ the demand for a seamless, integrated and tailored customer solutions, as well as the need to obtain operational efficiency, is leading to greater interest in technology. Smaller firms which lack the resources to deploy cutting-edge technology have reason to merge with larger players to remain competitive and relevant to investors. We expect this trend to continue.

• Product innovation: The growing pace of product development has disrupted and dislocated existing investor-manager, manager-distributor and advisor-investor relationships, while also creating significant opportunities for nimbler firms. For example, the number of ETFs has continued to grow, increasing from 923 in 2010 to over 1,500 in 2015 as new strategies are invented. New launches range from 100% passive index funds to smart beta and hybrid passive/active funds. Smart beta strategies gained tremendous popularity in 2015, accounting for over one-fifth of ETF products and about one-third of asset flows for the first six months of 2015, according to a recent report. New solution-oriented products are also being marketed. 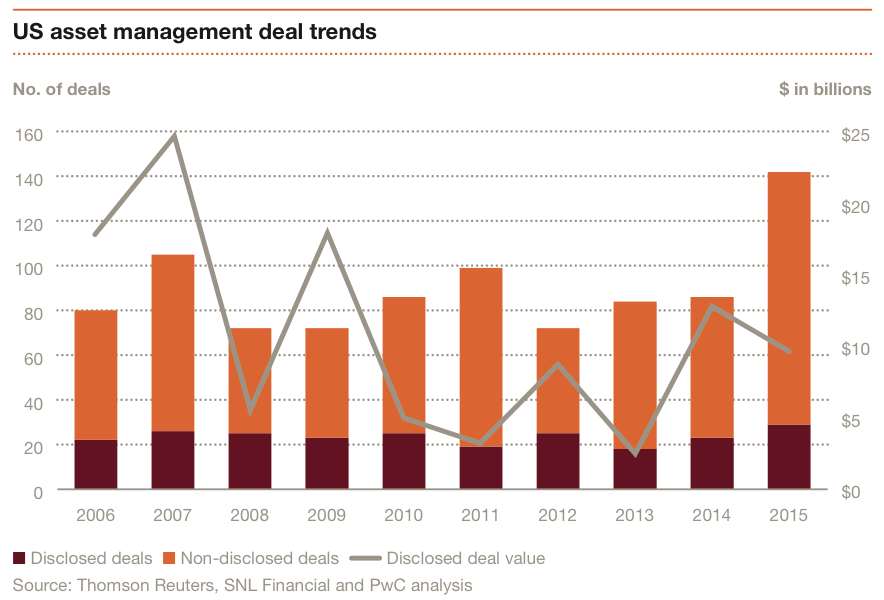