How Can Leadership Make A Difference? 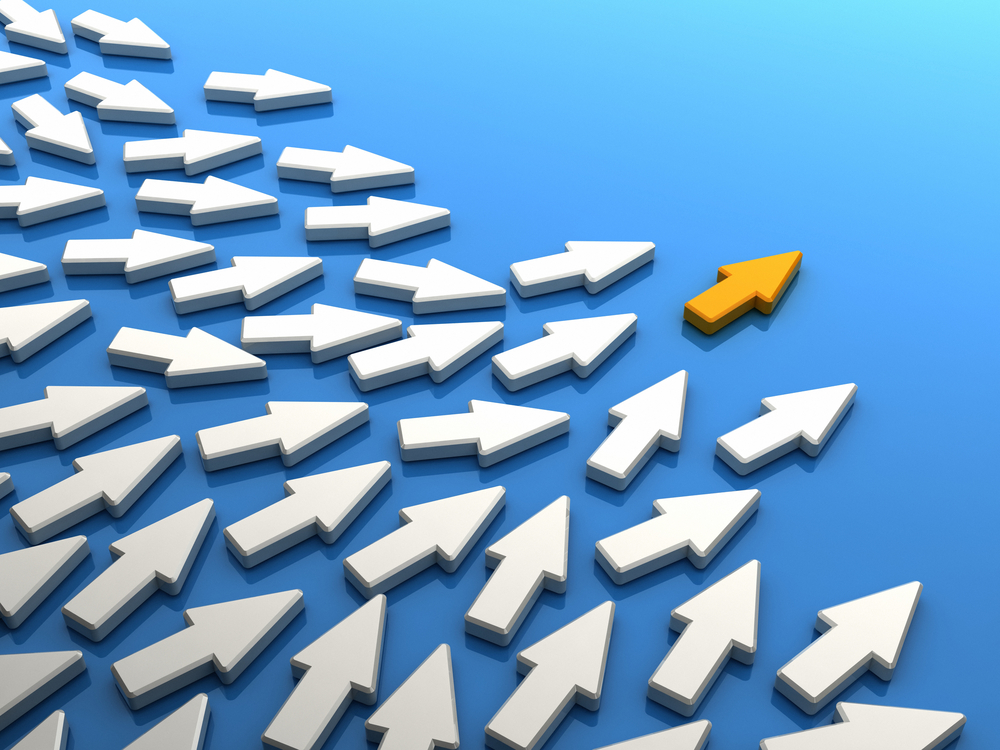 Signing an M&A deal is the first step on a long journey. Deals are done to generate faster revenue growth. Maximising the value that can be captured from mergers and acquisitions is thus becoming more important than ever. However, as our survey shows, this and other ambitious targets are too often not achieved. The main reasons for the loss of deal value are late integration planning and slow or unstructured integration. The challenges faced by all levels of management as they go through a deal are fast and furiously, but the decisions taken have a lasting impact.

Members of management who have done major acquisitions unanimously stress the importance of the integration phase. This study shows the drivers and barriers in the integration. It shows that one of the most critical factors to capture deal value is senior management’s closest and unwavering attention.

Approximately 70% of the participants say that the board’s involvement is low or inexistent. More than a third of the companies surveyed rate the board’s ideal involvement higher than it actually was during the integration phase.

An early start of post-deal planning makes companies more likely to achieve their core objectives of the transaction. Companies which started planning their post-deal integration before signing the deal reported a higher rate of objective achievement than those who did it at a later stage.

Nearly three out of four companies report problems integrating information systems and processes that cause delays, lost revenues and missed opportunities. Over 50% of the participants rate the mutual understanding of different company cultures as the next most important issue.

Due Diligence is crucial for the overall success of an integration

Due Diligence – particularly commercial, operational, management and legal Due Diligence – is found to be one of the decisive factors for success when it comes to capturing the value of the deal. Companies that link the results from Due Diligence with integration tasks perform better in terms of goal achievement as well as speed of the integration process and overall costs of integration activities.

Approximately 40% of the companies stated that they had not moved fast enough regarding integration. Reconciling differences in operating philosophies as soon as possible is deemed key to improving post-deal financial performance.

Three out of ten companies fail to measure strategic goals of the integration process. Monitoring strategic goals and setting relevant KPI’s directs the organization towards the designated business model.

One out of four companies underestimates the cost of post-deal integration. Planned overall costs are often overrun by the effective internal and external costs of the integration. This leads to a lower overall achievement of cost synergies.

Analysts prefer financial criteria with regard to both objectives and communications content while companies generally favour strategic over financial content. This perception gap can cause a company’s stock to diverge from its effective value.

In August 2007 PricewaterhouseCoopers surveyed senior executives from 55 Swiss companies. The subject of the survey was senior management’s main concerns during post-deal integration.

The respondents had been engaged in a merger or an acquisition in recent months or years. Many of the companies were the acquiring company, some the target firm. The surveyed companies represent all industries and various sizes.

In addition, PwC asked 17 analysts in order to find out how their perceptions differ from those of companies.

Detailed information on the participants’ profiles can be found in the appendix.

In almost 90% of the polled companies the board was involved at one point or another in the deal (fig. 1).

Considering the board’s legal duty to oversee the company’s operations, this number is alarmingly low. The outcome reflects the need to take active responsibility for corporate governance and corporate accountability regulations during an integration. Both the board and senior management have to conduct a careful balancing act. They have to juggle strategic and tactical challenges by maintaining the stability of the business.

As the board involvement is crucial for the success of the integration phase we recommend that the board be actively engaged in the post deal integration process. The board is obliged to oversee the progress and check financial and strategic results to be able to intervene at any time in order to take its corporate governance responsibility.

“Senior executives’ objectives – so it seemed – were achieved with the closing of the transaction. On the other hand the work for us had just begun.” – Survey participant 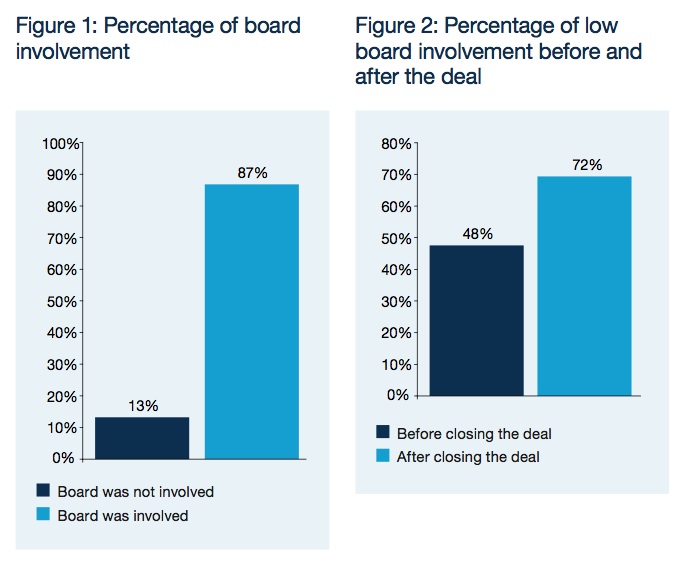 Still more than a third of the companies surveyed started planning their integration activities after closing the deal, leaving them only little time for a structured and elaborated approach (fig. 3).

Furthermore, our survey shows that planning the post deal integration phase prior to the deal’s closure helps to better achieve defined objectives such as an increase of cost synergies, EBIT or growth in market share (fig. 4).

A detailed foregoing planning is crucial for a deals success. Clear and measurable objectives should provide a guideline for the management team during the integration phase. The early development of an integration plan is critical and should include the time from the signing until three months after the closing of the deal.

As the integration plan is implemented the leaders have to carefully manage a balancing act between consistency and flexibility. It is essential that executives stay true to strategic visions and plans they established. Nevertheless, they must have the agility to respond to practical considerations that arise unexpectedly and make the necessary course corrections.

“We would have integrated faster had we known that our Return on Investment could have recovered sooner.” – Participant of the survey

Increasing process orientation and the continuing importance of information systems in many companies have shifted the focus in the integration phase towards processes and IT. Nearly three out of four companies reported difficulties integrating processes and IT systems.

The alignment of different company cultures plays the second most significant role. Transactions have a tremendous impact on employees in both organisations involved and politicking and uncertainty can erode much of the value on which a particular deal was based.

But it is all too easy to overlook the human element when there is so much else to be done. Faced with challenges they have never previously had to address, many business leaders understandably focus on getting things done rather than managing the emotional undercurrents. Yet “soft” factors are as important as “hard” factors in determining the outcome of transactions.

IT and process integration should be part of the Due Diligence process. In this stage identifying the formal and informal processes for both buyer and target company is key. On the other hand the alignment of IT systems has to be staged according to the risk profile and the business model.

Successful deal teams should also include people-oriented leaders who are sensitive to issues of morale and uncertainty, who can effectively communicate with employees in both organisations, and who are fair in their dealings and are personally committed to making the transaction succeed.

“What we would do differently in retrospect is to create a more detailed plan of our processes. If we had done so we could have understood our mutual procedures better.” – Survey participant 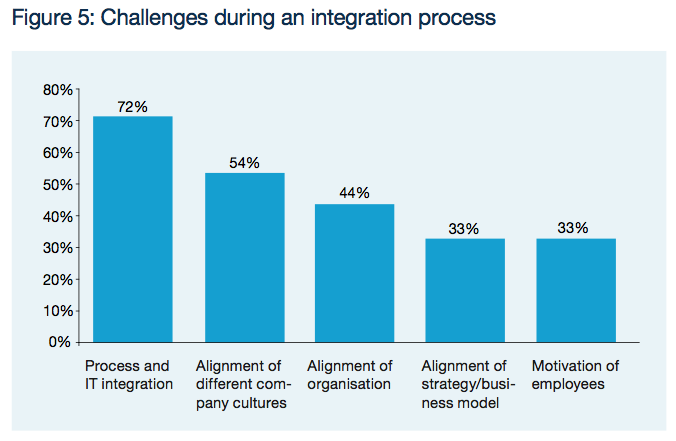 Due Diligence is crucial for the overall success of an integration

Still, thirty percent of all companies did not perform a Due Diligence at all, whereas 70% of survey participants are aware of the criticality of a Due Diligence (fig. 6).

Companies that performed a Due Diligence ahead of the transaction were better off in capturing deal value during the integration. They reported better achievement rates of their core objectives. Further, they planned their post-deal integration activities more adequately.

Companies that performed a Due Diligence ahead of the transaction were more likely to achieve their objectives such as revenue growth, cost synergies or Return on Equity (fig. 7).

Conducting a Due Diligence is a critical factor for the success of a transaction. Integration issues such as potentially incompatible IT-systems, cultures and management practices must be evaluated and understood during the Due Diligence phase. Using the key findings of commercial, operational, tax or management Due Diligence sets the basis for key milestones for a rough-cut integration planning. Good practice is to further identify and measure costs as well as top line synergies.

“We only performed a Financial Due Diligence. Cultural or other integration relevant key issues were not assessed in detail.” – Survey participant 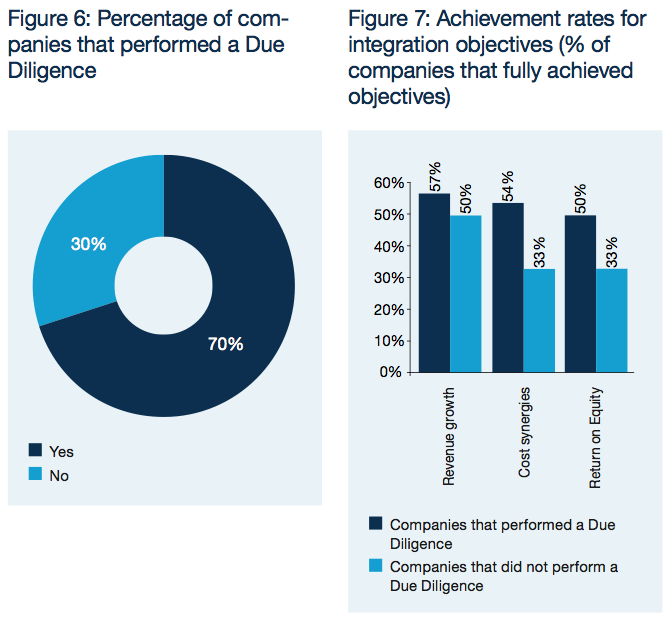 When asked the one thing companies regret most from their last deal, nearly 40% cited not moving fast enough (fig. 8). Companies that made fast transitions reported better financial performance, morale, productivity and time to market, along with fewer systems and management integration problems.

Once the commitment is made the timeframe in which it is possible to make positive changes is very short. There are more questions than answers and more to do than time allows. The first 100 days after closing a deal are particularly significant, because it is then that people are most open to new ways of thinking and working. So it is essential to set the right course quickly otherwise attitudes will harden like concrete that sets before it has been poured.

“We should have conducted the integration faster because that way we would have more time for the customers now.” – Survey participant 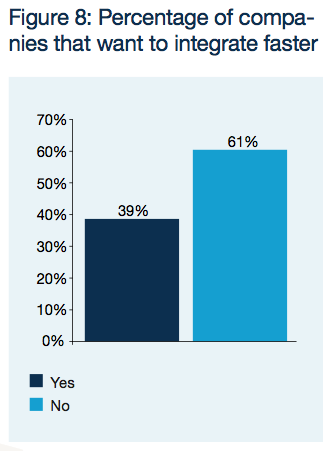 Three out of ten companies reported that they did not measure strategic criteria (fig. 10), although strategic objectives such as an increase in market share, achievement of cost synergies and access to new geographical markets are some of the main reasons for the deal and the fundamental basis for the business case (fig. 11).

We recommend that clear strategic as well as financial objectives of the integration be defined prior to signing the deal.

It is essential to establish robust measures to achieve a “steady state” for business continuity on the target side and on the acquirer side. Multiple measuring criterias have to be defined assessing progress for both, so that the organisation can make quick course corrections as needed.

It is important that measurement takes place on a periodic basis and it should be more often within the first months after deal closing.

“The only thing we did measure was the increase of revenues after the merger.” – Survey participant 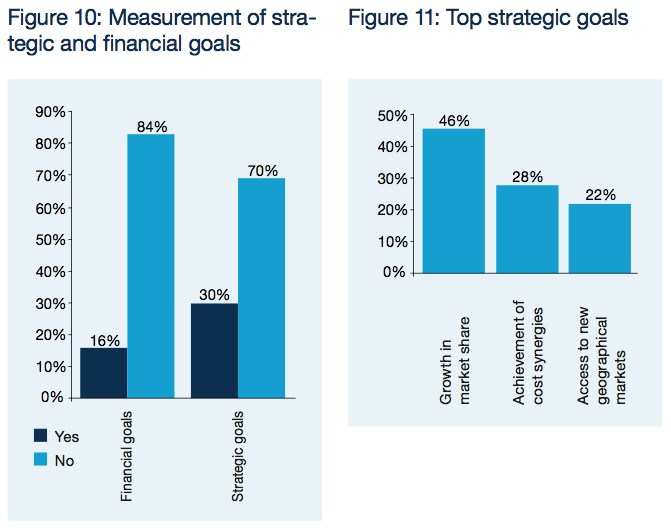 Many companies failed to assess the extent of costs in the integration process adequately. The consequence was often that the overall value of the deal decreased. Targeted cost and revenue synergies are bought dearly with higher integration costs.

Many companies underestimate the real cost of their integration process.

Our experience shows that overall integration costs are statistically between 6% and 8% of the transaction volume. Wrongly assessing costs threatens the overall success of a merger by decreasing the added value. The cause is often insufficient planning and the failure to include integration aspects early in the Due Diligence process.

“We thought that we would only spend money for the payment of the purchase price; integration costs were not on management’s agenda at the beginning.” – Survey participant 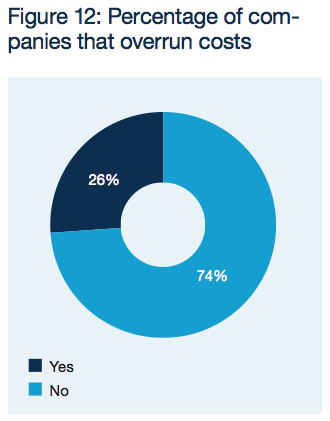 On the other hand the need for more frequent and detailed strategic goals communication could not be identified within the analyst group (fig. 15)

Failing to communicate to analysts in a suitable way results in intransparency. This results in a potential gap between the fair value and the market value of the company due to analysts’ influence on share value. It is crucial that companies know what information analysts expect and communicate accordingly in the right frequency. Since analysts prefer to be informed about financial criteria, companies should try to quantify and communicate their expected financial results adequately. 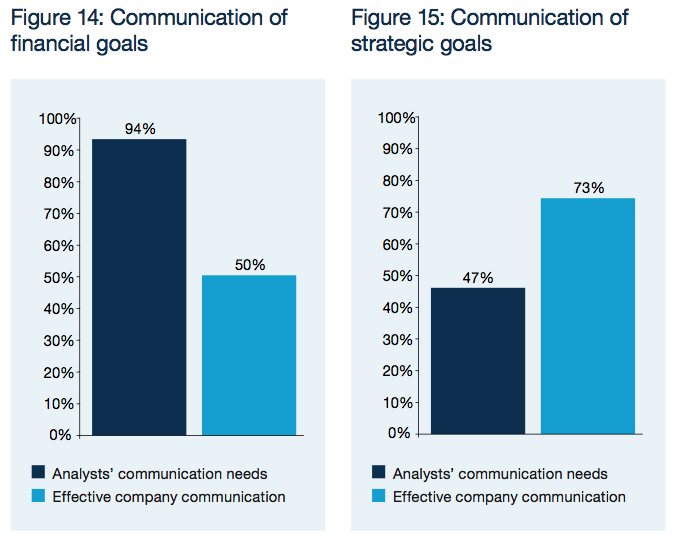 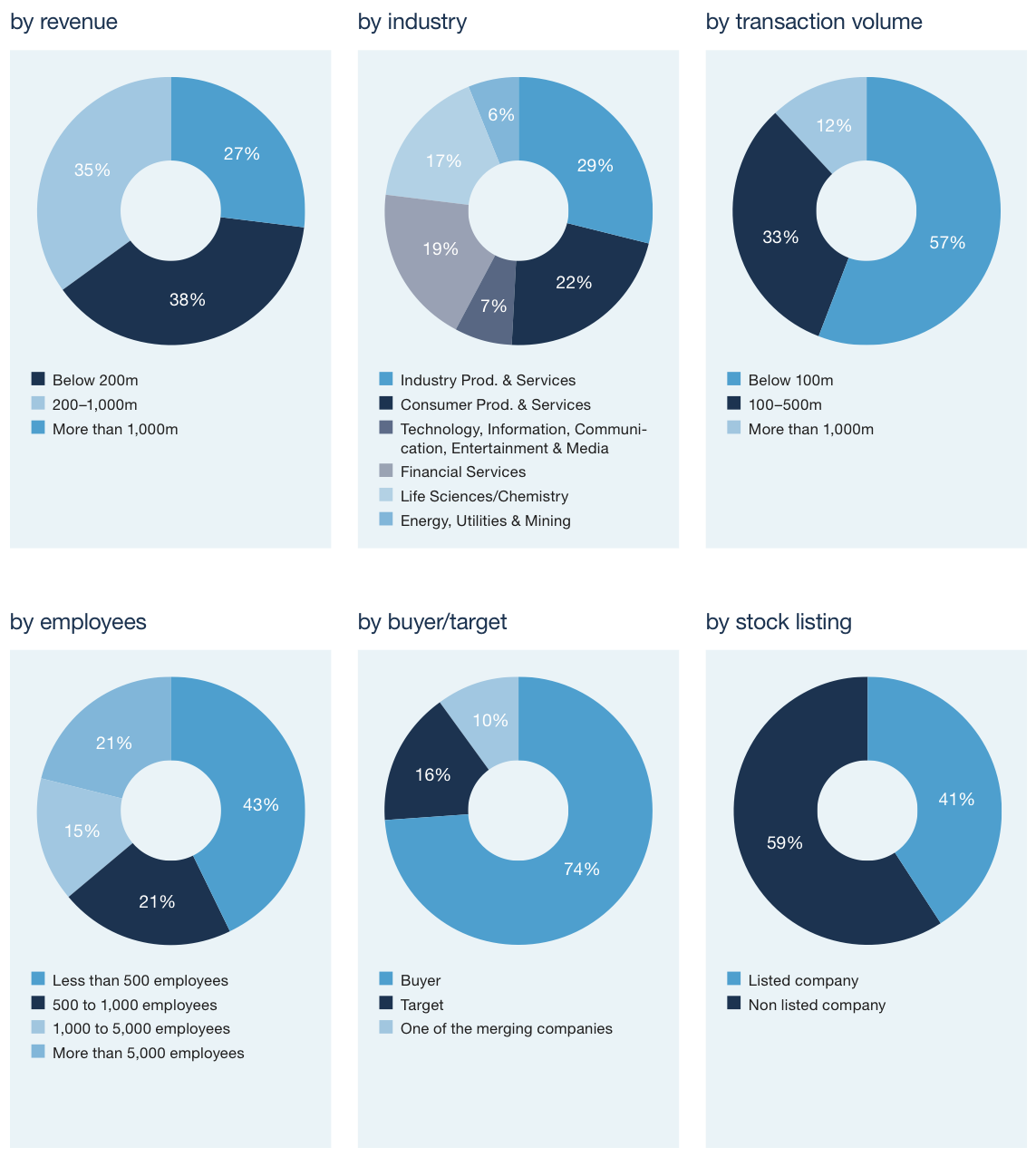