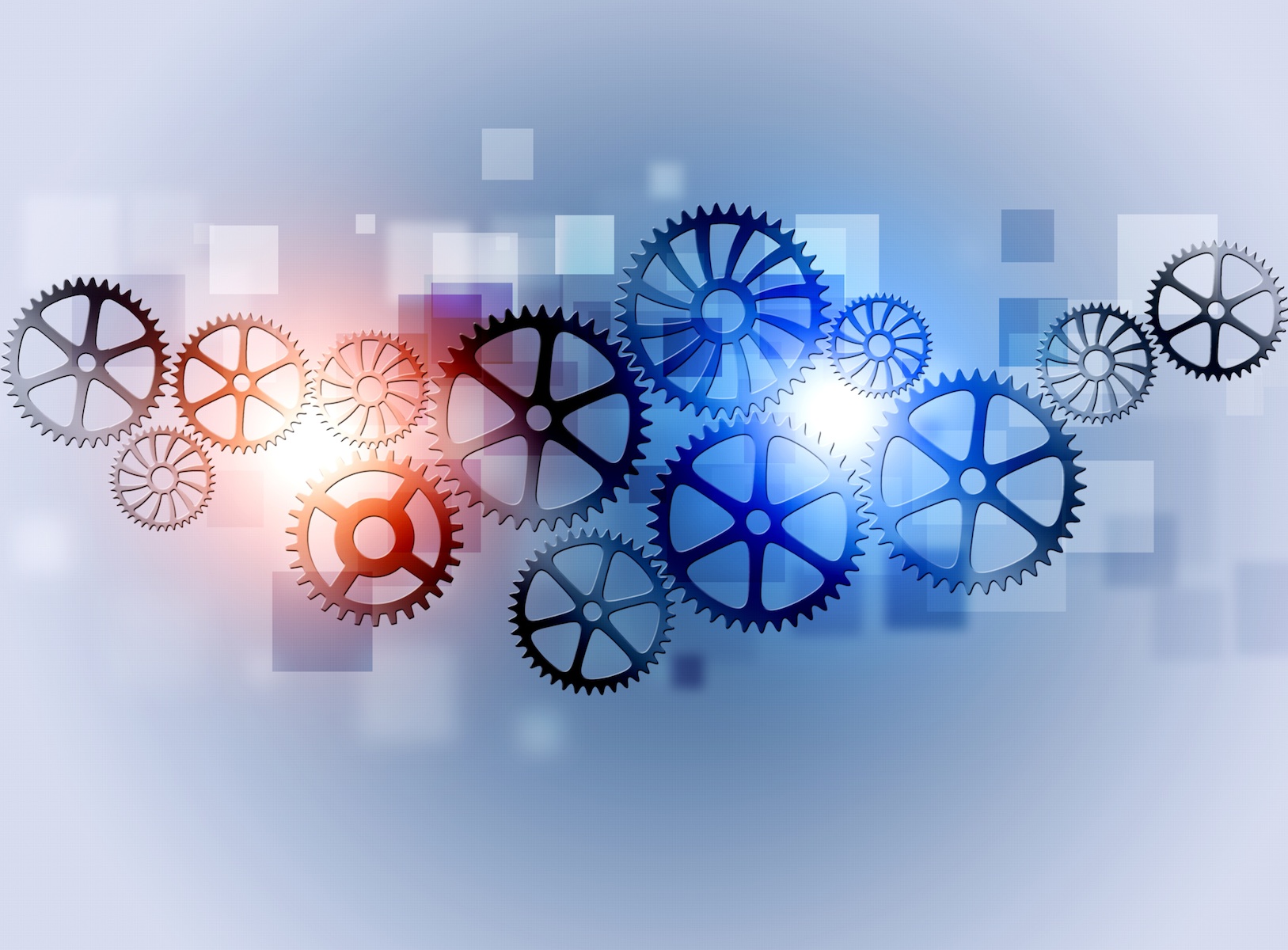 The U.S. Wholesale Distribution (WD) industry appears to be stuck in neutral. Top players in many lines of trade suffer from low margins and stagnant or slipping market share — a result of limited domestic expansion opportunities, regulatory constraints, structural impediments, and other obstacles.

One exception to this trend is Food Service wholesalers, where the top four players have contributed a majority (73 percent) of the industry growth. This may be attributed to a higher market share concentration and transformative business strategies of these top players.

Mergers and acquisitions (M&A) may help shift the WD industry out of neutral and into drive. Certain segments are beginning to take advantage of its potential, as evident from increasing WD M&A activity. Yet, few top players are making meaningful, large-scale acquisitions that could provide impetus to their market growth and help strengthen distributors’ position with upstream and downstream partners. According to the 2013 Mergerstat Review (a yearly publication on mergers, acquisitions, and divestitures), Wholesale Distribution ranked among the top five seller industries (U.S.) in 2012. However, the average deal value was only $55 million. Fortunately, the number of transactions above $100 million is increasing — there were 136 in Wholesale Distribution between 2008 and 2012. To realize true transformational change, distributors likely need to approach the M&A process very differently than they traditionally have, moving from a focus on small or niche transactions to larger, more strategic deals that bring scale advantages and strengthen channel position. In addition, companies need to plan and execute transactions such that their investments are justified from an economic and strategic perspective.

In this paper, Deloitte outlines the obstacles and drivers for strategic M&A in the WD industry, with references to select lines of trade, and outlines frameworks to determine if transformational M&A is the right approach for an organization.

The U.S. Wholesale Distribution industry is large ($6.5 trillion in 2007) and quite fragmented. Many of the seven researched lines of trade are characterized by a low level of concentration: market share for the top four players grew only two percentage points between 2002 and 2007 compared to six percentage points between 1997 and 2002 (Figure 2).

More recent data from IBIS suggests that market share for the four largest players in Wine & Spirits wholesaling increased from 25 percent to 29 percent between 2004 and 2012. In Foodservice, the market share of the four largest wholesalers increased from 34 percent to 41 percent. A low level of market concentration and stagnant/low industry expansion shows that M&A may present a significant opportunity for growth and value creation for these large companies.

For WD players, the reasons to engage in M&A may be more pressing than simply tapping into growth opportunities. An imbalance in market concentration compared to other channel partners may result in higher inventory levels, lower pricing and margins, and loss of autonomy for WD players. These considerations may drive the need for higher-value/transformational M&A among WD companies.

Figure 3 plots the relative market strength of WD companies against suppliers and customers in their respective industries based on the Herfindahl-Hirschman Index (HHI). HHI is a widely accepted indicator of the level of industry competition market strength and is used to assess level of competition by regulatory bodies in the U.S. and abroad. The industry lines of trade that appear above the balanced frontier are those where WD players are typically larger (and more concentrated) than their channel partners. This gives them a stronger market position against suppliers and large customers. On the other hand, industry lines of trade that appear below the balanced frontier are those where suppliers or customers are more concentrated than the WD players.

The U.S. Wine & Spirits industry is an interesting case to analyze. Distribution is highly regulated and most legislation favors the WD players. However, large suppliers (which have a disproportionate market share and size) are able to dictate high service levels, push excess inventory to the distributors, and influence product/category selection. Yet, Wine & Spirits distributors have mostly limited their M&A activities to small, one-off transactions. Southern Wine & Spirits is an exception; it has a national footprint and, therefore, stronger positioning with suppliers and retailers.

WD companies in poultry and dairy products, however, have long demonstrated their strength by running private label brands in competition with some of the largest suppliers. The soft drinks category is an exception that does not fit well in this framework due to owned/captive distribution networks (until recently) for suppliers such as Coca-Cola and Pepsi. 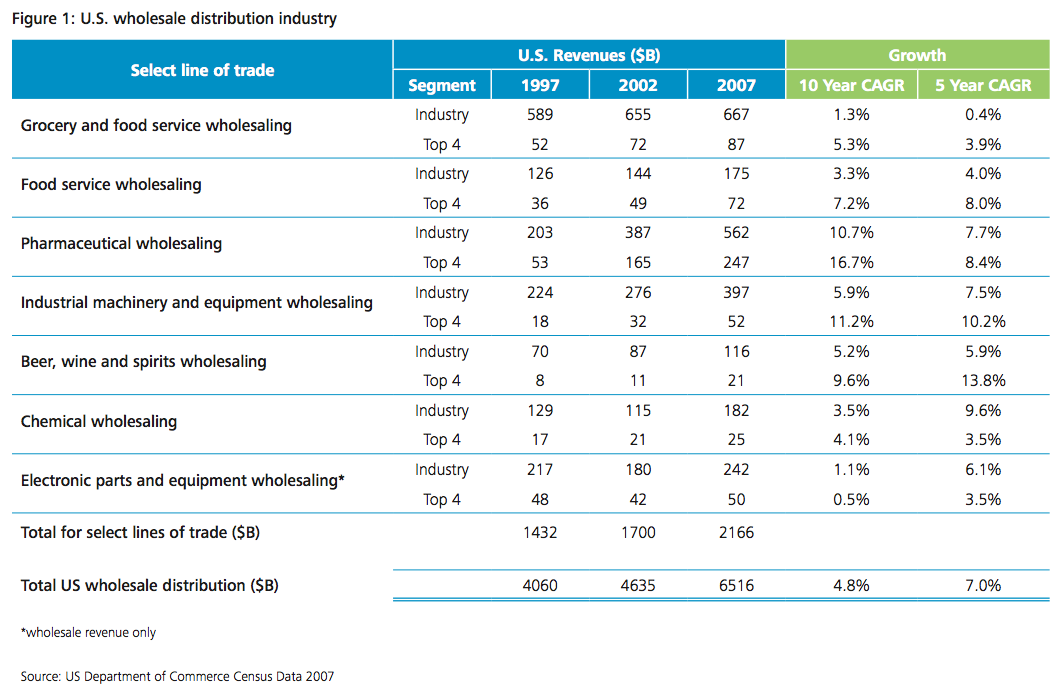 M&A seems to be a necessary part of the strategy for both protecting and creating value; however, a number of factors have, thus far, inhibited transformational M&A in the WD industry and, if not addressed, may continue to contribute to the sector’s poor track record. These include:

1. Dubious synergies. Sub-par outcomes — likely from a failure to capture post-integration synergies or the inability to create sustainable competitive advantage — may have deterred many distributors from engaging in M&A. Acquisitions by distributors accounted for about 18 percent of WD transactions between 2003 and 2012, indicating low appetite due, possibly, to unrealized revenue/cost synergy targets. Approximately 74 percent of the deals involved non-WD strategic buyers (mostly upstream/downstream channel players), who may be looking to vertically integrate. Only seven percent of the deals involved PE buyers. Among common post-deal reasons for failure are cultural differences between the acquirer and the target, family ownership and lack of management discipline, disparate IT systems, loss of local/on-the-ground relationships post-merger, and lack of product/service differentiation.

3. Lack of M&A expertise. Many distributors do not have appropriate organizational capabilities to engage in M&A — infrequent and small-sized M&A does not justify such investments. Furthermore, prevailing levels of transaction termination fees may be counterproductive to sustained M&A in the sector.

For smaller distributors, the dimensions of pre-deal sourcing/evaluation/due diligence and post-deal execution may also appear overly complex and prohibitive.

4. Regulatory restrictions. Current federal, state and/or international regulations may create structural barriers to transformational M&A. In the Wine & Spirits industry, for example, franchise law mandates one distributor per state for a product/brand. If a large, national distributor has a dominant presence in a certain state it is unlikely that another may seek to acquire assets there.

5. Fragmented seller base. Rolling up a fragmented line of trade involves lining up a series of motivated sellers. In 2012, over 60 percent of the WD transactions involved private sellers with an average deal value of $11 million. Therefore, the lack of sizeable targets may be a deterrent for transformative M&A in the WD industry.

Although daunting, some of these obstacles have been easing in recent years, while others may be overcome with carefully planned strategies. 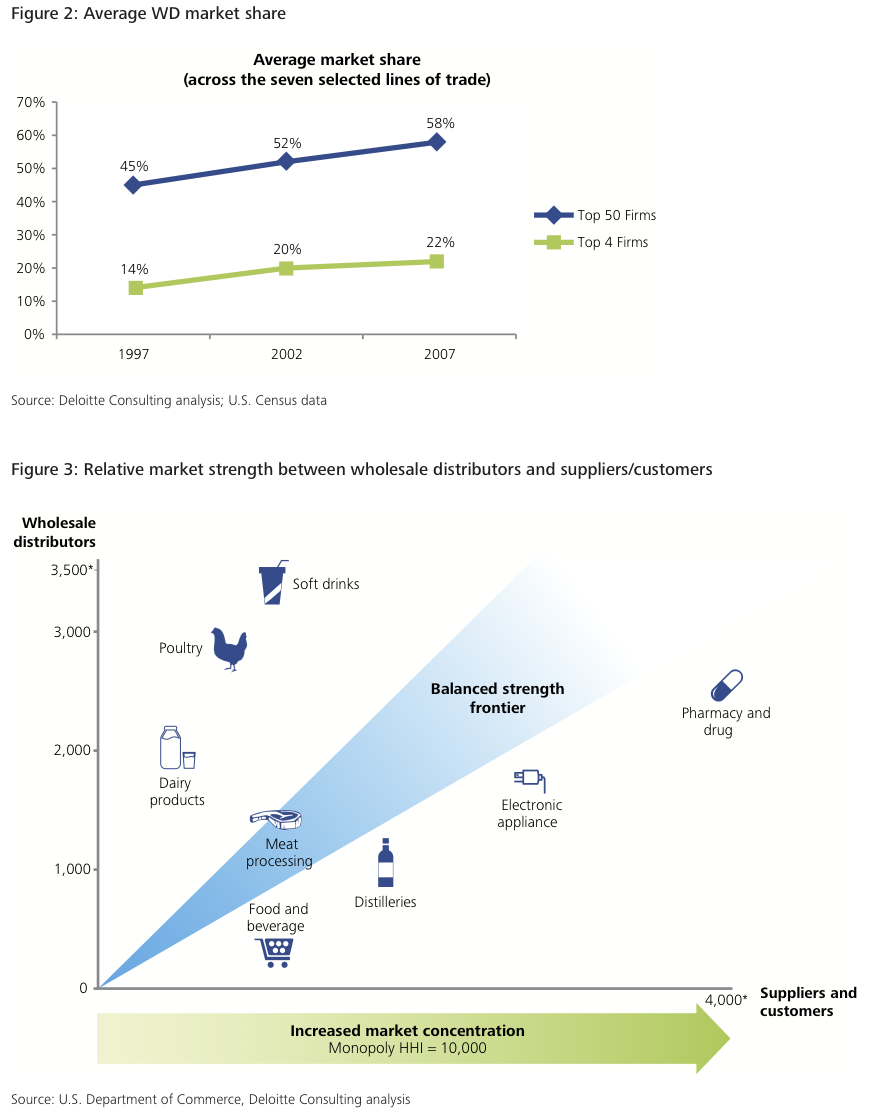 While distributors in general have been slow in embracing transformational M&A, numerous drivers seem to favor its advancement. These include:

1. Differentiation. To succeed in the current marketplace, distributors may need to break away from the traditional WD archetype and differentiate themselves through innovation, scale, and an ability to uniquely align with their channel partners. Engaging in transformational M&A deals that may drive efficiencies across the WD value chain (e.g., through joint strategic planning with suppliers or one-stop solutions for large chain customers) will likely form the basis for differentiation. Illustrative of this trend, in July 2013, U.S. food distributor Nash Finch Company announced its merger with Spartan Stores, Inc., a leading regional grocery distributor and retailer, in a $1.3 billion all-stock merger to create a combined entity with annual sales of $7.5 billion and significant scale and geographic reach across Grocery Wholesale, Retail, and Military Commissary and Exchange channels. This merger is expected to help Nash Finch close the gap with Supervalu for fourth-largest player in the grocery distribution industry.

2. Disintermediation threats. Over 70 percent of WD M&A deals in the last five years have been driven by upstream and downstream players in an effort to vertically integrate and gain leverage across their value chains. Individual distributors may need to increase scale to counter the “Amazon effect,” whereby large manufacturers/suppliers develop capabilities internally and serve as their own distributor. Other disintermediation threats include the rise of Group Purchasing Organizations (GPOs) in the medical supplies and Foodservice sectors.

4. Industry disruption. Industry disruption on either end of the value chain may prompt M&A among distributors. Hospitals, for example, are forming large health systems with centralized purchasing operations. These organizations prefer to buy supplies from a single distributor that can offer regional/national distribution and economies of scale. In response, the Pharmaceutical WD sector has undergone large-scale consolidation; the top three distributors will command an estimated 44.3 percent market share in 2013. In other lines of trade, including Foodservice, Wine & Spirits, and Industrials, manufacturer consolidation is spurring similar responses among distributors. Increasing M&A deals across adjacent lines of trade also creates disruptive trends. For instance, some foodservice distributors are acquiring alcohol distributors as well as exploring greenfield entry into adult beverage distribution in many U.S. states. Such consolidation can significantly disrupt the dynamics for existing players within individual lines of trade.

5. Growth in financial buyers. Based on recent trends in Foodservice and Pharmaceutical distribution, there are reasons to believe that increasing M&A by financial buyers — especially private equity (PE) firms — will further increase consolidation in the WD sector. To date, many PE acquisitions have been made on a case-by-case basis; however, recent data on leveraged buy-outs (LBOs) and secondary market deals suggest their desire to drive consolidation in the WD sector by buying smaller companies, creating scale and a platform for enhanced value, and exiting the sector after creating sizable value for themselves. Deal activities involving PE firms have reached pre-recession levels of over 10 percent of WD M&A deals. Private equity firms also have been making acquisitions in Industrial Equipment, Beverage, Chemical distribution, and Automobile Parts distribution.

Diagnostic framework — should transformational M&A be part of your growth strategy?

Wholesale distributors may struggle with deciding whether transformational M&A should be part of their growth strategy due to complications associated with:

– Wholesalers may fear an aggressive response from competitors and channel partners.

– Heightened M&A activity may influence target valuation and the ability to realize synergies.

– Not all targets are culturally compatible.

– There may be a trade-off between growth objectives and maintaining control over the business for family-owned enterprises.

A WD player may overcome these complications by applying a framework (Figure 4) that takes into consideration its strategic posture and models a representative set of likely scenarios. Management should analyze the likelihood and severity of these scenarios and compare relative value-generation through M&A and a series of other strategies — including the cost of “staying neutral.” By using this thought process, management may be able to assess the need and urgency for undertaking transformational M&A.

Wholesale distributors in numerous industries may need to size up to survive and prosper in the coming years. When properly assessed and executed, strategic transformational M&A can often serve as a powerful engine for much-needed growth and value creation. 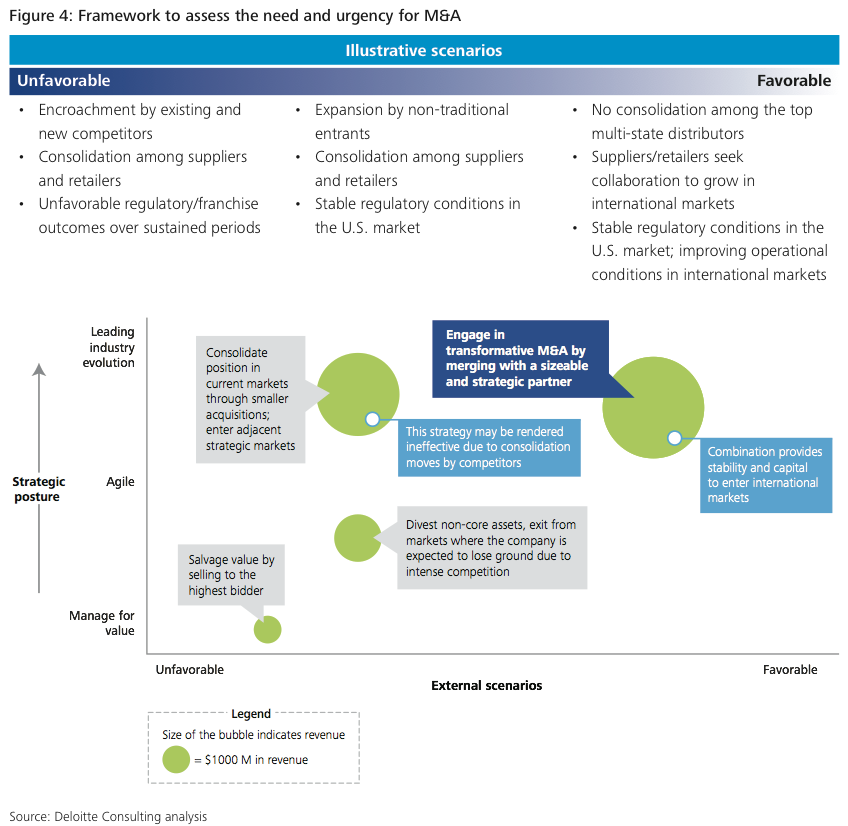