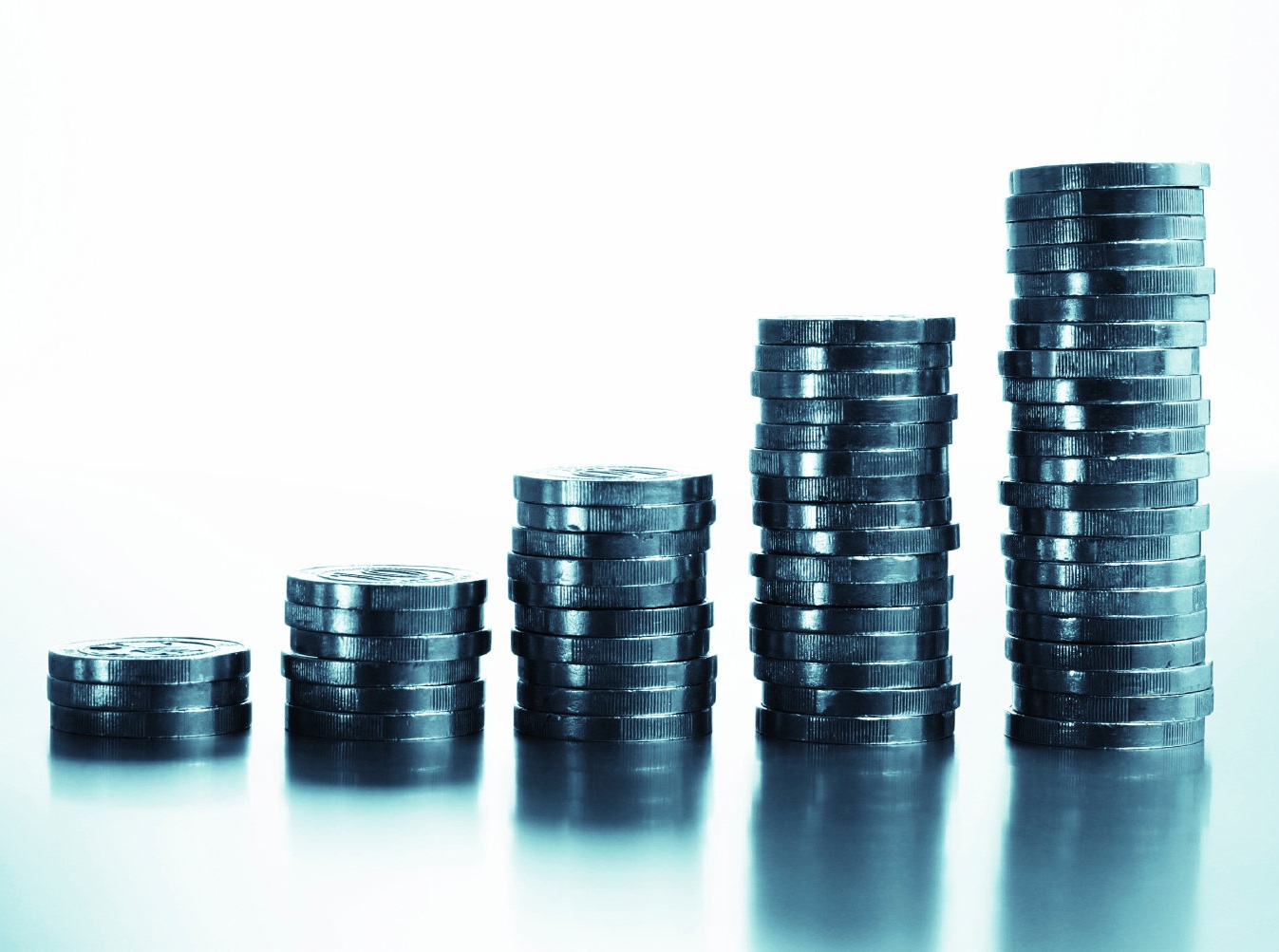 Despite prevailing financial turmoil and economic uncertainty, global M&A market has shown in 2014 an unseen growth since sub-prime crisis. The research focuses on reaching understanding and reconstructions on how management and corporate strategists can benefit from opportunities arising during various economic cycles. Development of a theoretical model that interlinks prevalence of M&A with macroeconomic variables through the thorough analysis of existing scientific empirical literature supports that M&A can represent a successful and value creating strategic growth mode during economic uncertainty periods. Global economic uncertainty highlights changes in value proposition offered by M&A.

Global economic outlook of 2014 suggests that worldwide merger and acquisition market has experienced an unseen growth. Total M&A deal value has risen by 47% to up to 4.7 trillion USD whereas total number of M&A transactions has risen by 7% by up to 82.354 deals to compare with 2013. This significant growth has terminated the M&A stagnation period circumstanced by the years preceding financial crisis. Even though M&A statistical data suggests growth or at least stabilization stage, global economy is being challenged. Rapid decline in oil prices, quantitative easing program of the ECB, US dollar appreciation and subsequent weakening of the euro and other currencies, concerns about political and economic future of the Euro Area and European Union are just a few challenges global world is changing. In addition to that, the increased geopolitical uncertainty related to the Russia-Ukraine and Middle East conflicts highly tenses global market. This contradicting situation implies that despite uncertainty, economic cyclicality and intense global situation, companies are implementing strategies that include gaining access to new geographies. Companies enhance their geographic diversification, increase investments in secondary markets and focus on growth outside their home regions as a response to the crisis. It highlights strategic nature of M&A as they allow firms to accelerate their growth in pursuit of business development outside their current markets while providing diversification benefits. Companies are searching for efficiency, access to new technologies, diversification, are driven by desire to increase market share and market power.

Even though classical studies by Nelson (1966), Gort (1969), Steiner (1975) and Golbe and White (1987) unanimously conclude that changes in economic growth and capital market conditions are positively related to the intensity of takeover activity, there are inconclusive results regarding outcomes of M&A transactions throughout economic cycle (Eisenbarth & Mecki (2014); Becketti, S. (1986), Martynova & Renneboog (2008)) Considering the scientific debate how macroeconomic conditions and business cycle affects M&A playing field, unique data set of M&A transactions constituted during years preceding financial crisis as well as volatile macroeconomic conditions and global financial turmoil, the purpose of the research is to examine how prevalence of financial turmoil affects conducting M&A and value creation trough this corporate expansion mode. The purpose of the research is to discuss and analyse how prevalence of financial turmoil affects conducting mergers and acquisitions (M&A) and value creation through this corporate expansion mode. The main research question is being answered throughout the paper by discussing developments of M&A volume and scope, identifying relationship between economic cycle and M&A activity levels, discussing implications of economic cycle to M&A performance, ascertaining markets best practices to deal with complexities in the M&A field during current turbulent market stage. The research employs market and industry data, elaborates on and interlinks various existing studies in order to answer the main- as well as sub-questions of the research.

Global M&A market overview including number of M&A deals and value of M&A transaction during the period 1998-2014 is presented in Fig. 1. On the one hand, M&A market activity levels indicate that financial crisis (2007-2009) reduced M&A activity levels during years preceding financial crisis. Weak macroeconomic environment negatively impacting CEO’s confidence level and risk appetite in addition to the increased scrutiny by regulatory bodies and corporate shareholders on announced deals significantly reduced volume of M&A during 2010-2013. On the other hand, it shall be critically remarked that during 2010-2013 all of the forces were aligned for a boom in mergers: cash piling up on corporate balance sheets, cheap financing and slow organic growth. Since 2011 consumer confidence was slowly growing and various size companies across multiple industries were building confidence and following in the footsteps of the market leaders in their industries that were experiencing growth by securing new markets. As the decade progressed and sub-prime crisis was placed under control, lending to finance deals was facilitated. Furthermore, companies have accumulated much needed cash as companies have exited parts of their business portfolio during progress of sub-prime crisis. This all let to corporate CEOs and boards launching deals in 2014 on a scale and at a pace not seen since 2007. The market met deal announcement positively as acquirers’ stocks often rose on deal announcements, a potential incentive for more deals. Major factors underlying this process are attributed to emergence of globalization; need to create large entities to be able to compete for seeking out growth and profits. In addition, as investors are globalizing their activities, they seek higher rates of return and the opportunity to diversify risk. Subsequently, many businesses recognize the uncompromising demand to venture overseas, or within their region. 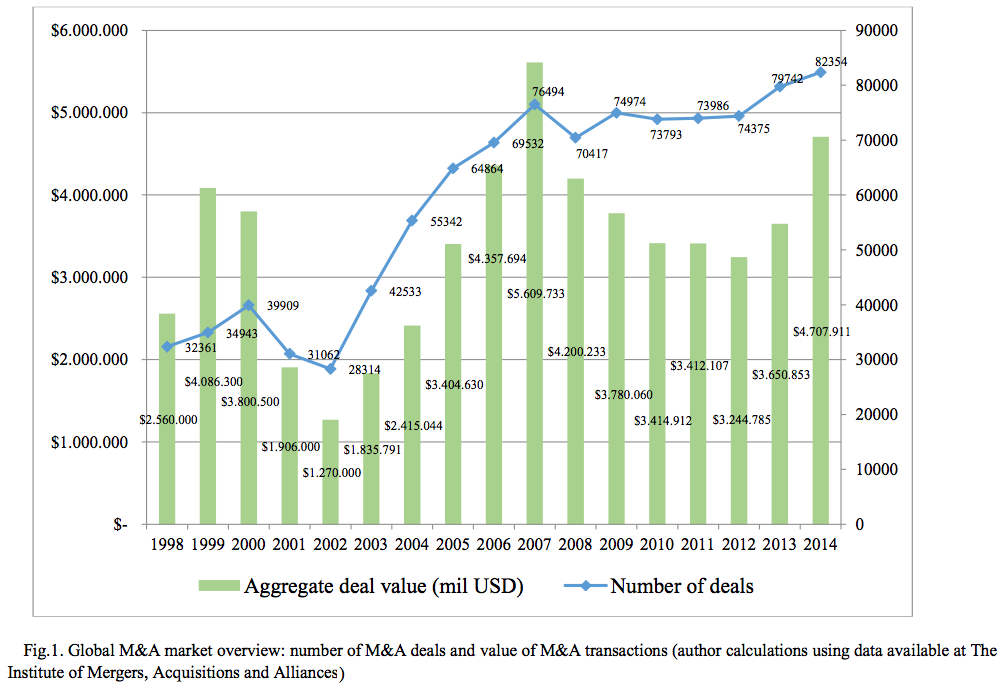 2. Relationship between economic- and M&A cycle

It is being acknowledged that M&A market is signified as occurring in waves, with regularly alternating periods of high and low M&A period. Harford (2005) and Mitchell and Mulherin (1996) found the reason to be regulatory, economic and technological factors together with sufficient liquidity of companies enabling them to pursue deals. Very often, high activity M&A periods are characterized by strong capital markets and thriving optimism about future prospects (Gregoriou, 2007, p. 2). Martynova & Renneboog (2008) concluded that patterns of M&A activities and their profitability vary significantly across M&A waves. Despite diversity, all waves are signified by several common factors: they are preceded by technological or industrial shocks, and occur in a positive economic and political environment, amidst rapid credit expansion and stock market booms. Takeovers towards the end of each wave are usually driven by non-rational, frequently self-interested managerial decision-making.

Various researchers aimed to identify relationship between economic- and M&A cycles. Classical studies by Nelson (1966), Gort (1969), Steiner (1975) and Golbe and White (1987) unanimously conclude that changes in economic growth and capital market conditions are positively related to the intensity of takeover activity. Srdan et al. (2011) remarks that existing studies largely ignore the role of economic activity (macroeconomic factors) in general and business cycle in particular on industry-level merger activity. Junrong & Zhongfa (2010) supported that M&A and economic cycle dispose a causal and synchronic relationship. Specifically, their empirical research shows that M&A and production index are in faint correlation, while significant correlation and synchronization with stock price and interest exists. This supports that M&A interacts with financial indicators. Becketti (1986) employed a 40-year time window period 1948-1979 and analyzed US merger data with the objective to identify relationship between M&A and business cycle. Using a set of macroeconomic variables (short term interest rate, S&P index value, capacity utilization, GDP) the researcher concluded that merger activity increases during expansions and decreases during recession periods. Re-examination of relationship between merger activity and industrial production by Cook (2007) has indicated a statistically significant bi-directional causality relationship between M&A and industrial production. Cook’s (2007) study implies that M&A activity is associated with economic activity.

Recent studies in macroeconomics and finance have emphasized a strong negative relationship between uncertainty shocks and capital investment policies. A study by Hogan Lovell (2012) investigated how global businesses are pursuing growth in an uncertain world and focuses on the development of successful strategies to navigate economic, political and legal risk, including the Eurozone debt crisis, protectionism and government intervention, the increasing burden of legislation, and the rise in shareholder activism. Specifically, the study refers that 9 of 10 businesses identify economic uncertainty as a barrier to invest; 62% businesses cite increased political uncertainty in business as an important issue, particularly for Eurozone countries. Furthermore, 88% of companies predict organic growth rather than executing M&A deals and implementing external growth strategy during periods of economic uncertainty. The rationale behind it infers that management is in a better position to control the growth proves if investments are made internally.

Gatti & Chiarella (2013) conducted an analysis and concluded that external growth (M&A) can represent a successful and value creating strategic move during periods of high-volatility, in particular for those who building on a strong and stable core business and ample financial capacity, have been disciplined in completing transactions with a clear strategic rationale. Table 1 lists number of opportunities and threats for M&A transactions during uncertain periods from managerial point of view, i.e. the measure of a successful M&A deal is defined as the ability of the bidder to pay a lower premium than the expected synergies that can be captured from the transaction.

To summarize the information, there are obvious de-incentivizing as well incentivizing factors to carry out M&A during uncertain periods.

Grave et al. (2012) examined the increased complexity and challenges that cross-border acquisitions need to address in their effort to succeed globally in an environment of instability fueled by ongoing financial turmoil. The authors perceived following key developments in the M&A market that are identified as a result of global financial crisis:

2. Looking deeper into the supply chain to identify acquisition targets is becoming attractive particularly in crossborder M&A to diversify risk, and maximize control, efficiencies and productivity.

3. Increasing the influence of shareholders, maximizing legal arrangements and giving consideration to international political implications are all finding their way into the acquirer’s deal structure.

5. Cross-border M&A is contributing to the change into our macro global political, social and economic integration.

Global M&A market has shown in 2014 the largest growth since 2007. Furthermore, the environment surrounding these deals has significantly changed. Global economic developments are changing landscape of M&A and identifying new targets that indicate a shift with significant impact to global practices. It is being remarked that global economic uncertainty highlights the value proposition offered by M&A. The nature of M&A has grown beyond a consolidation tactic to include strategic growth, expansion and innovation (Maney et al, 2011). Specifically, it is being proposed that companies are implying variations on the traditional motivation, typical reasoning and procedures of M&A. The research proposes that M&A can represent a successful and value creating strategic growth mode during economic uncertainty periods.

Future research and further conceptualization shall be directed to empirical investigation in this field and direction. It is recommended to perform analysis of accounting measures of profitability and soundness of cashflows generation. Furthermore, academics are encouraged to measure short-term effects on the price of the bidder and target stock when deal is announced or perform a long-term study and investigate whether M&A deals executed during uncertainty periods over- or under-perform peer and market developments.