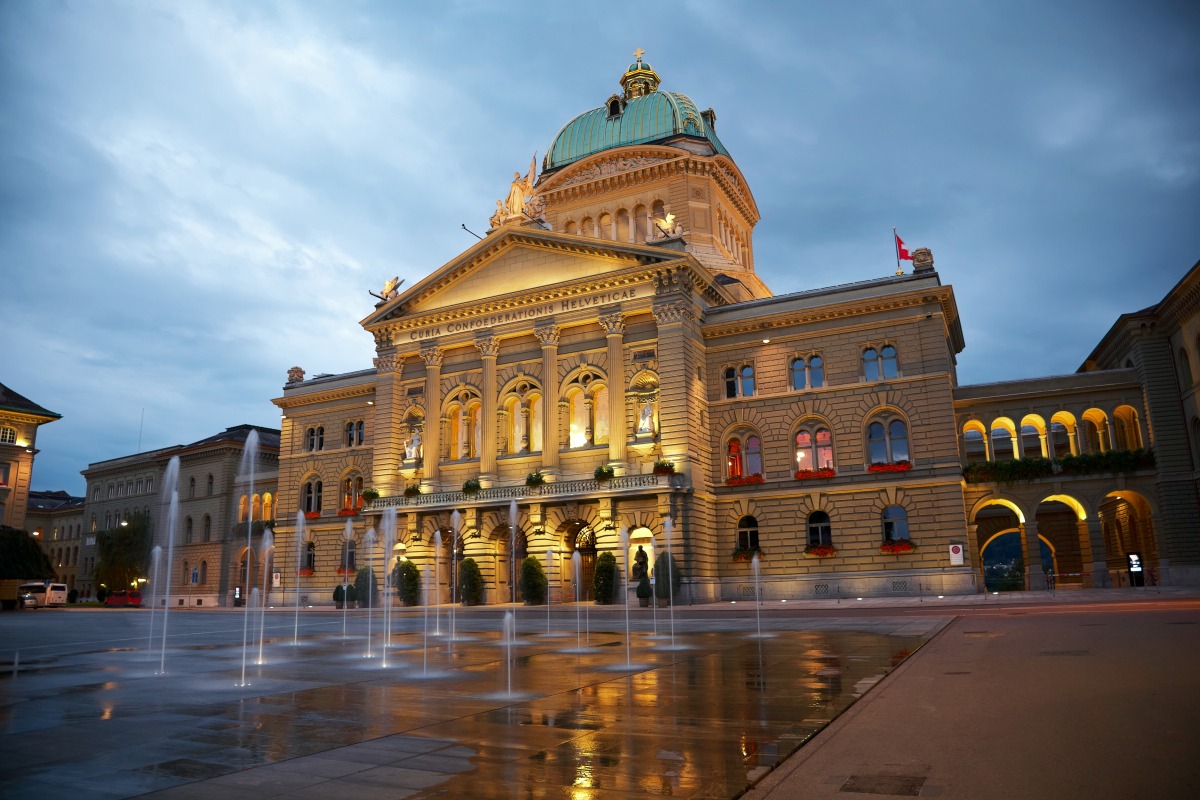 In the second quarter of 2015, Swiss M&A activity continued to decline. As the wave of mega deals grinded to a halt and economic indicators worsened, as the Swiss Franc gained strength, both the number and volume of transactions suffered, dipping well below its long-term historic average.

Looking ahead and given the significant decline in M&A activity in recent quarters, the Swiss M&A market is expected to stabilize at Q2 levels.

► In the second quarter of 2015, the performance of the Swiss M&A market continued to decline, as evidenced by a decrease in both number and volume of transactions. Compared to the previous quarter, the number of transactions decreased by 6% while deal volume saw a 41% decline.

► The 128 transactions announced in Q2 reached a volume of only CHF 9.5b, the lowest value recorded since Q4 2013 and significantly below average volume per quarter of CHF 21.0b.

► The sharp decline is a result of the wave of mega deals grinding to a halt. While previous quarters recorded several mega deals, such as the Lafarge and Holcim merger (CHF 41b), the Alliance Boots and Walgreen deal (CHF 23b) and the GlaxoSmithKline and Novartis transformational transaction (CHF 14b), no transaction valued above CHF 5b was announced in Q2 2015.

► With a weak performance over the last three months, the SMI’s cumulative 12-month performance totaled 4.7% at the end of June.

► Valuations of export-oriented companies and sectors, e.g. Chemicals, Construction and Materials, Industrial Goods and Services and Retail and Consumer Products, were negatively impacted by the strong Swiss Franc. 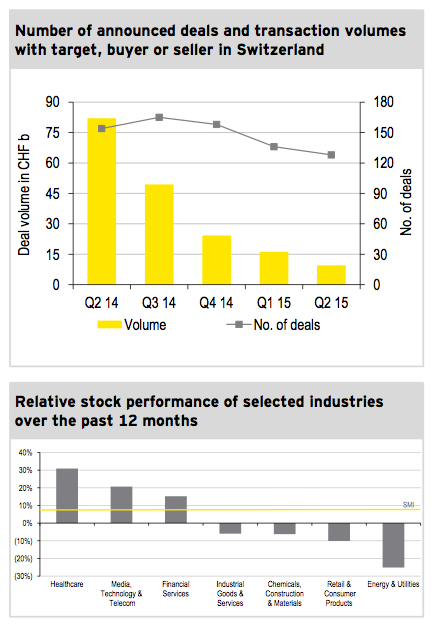 ► In the second quarter of 2015, Media, Technology and Telecommunications was the most active sector in Switzerland, contributing 27 transactions or 21% of the total 128 deals announced. The largest transaction in this sector was the acquisition of einsAmobile by mobilezone valued at CHF 70m.

► Despite the turbulent times since the SNB’s announcement to abandon the CHF/EUR floor, Industrial Goods and Services continued to have robust M&A activity in the second quarter of 2015, contributing 26 deals or 20% of all deals announced. The largest transaction was the merger of KABA and Dorma, valued at CHF 1,214m.

► Retail and Consumer Products registered a moderate decline of one percentage point, remaining the third most active sector in terms of M&A. Although the transaction value was not disclosed, Kuoni’s sale of its European outbound travel business to Rewe was a landmark transaction for the Swiss RCP sector. Kuoni is considered one of the top tier travel service providers in Switzerland and has over 100 years of tradition in serving Swiss and international travelers around the globe.

► In Q2, the share of large transactions reached the highest value ever recorded, as 46% of all deals were valued above CHF 250m.

► This is to be viewed with caution, however, as deal values were only disclosed in 17% of all announced transactions.

► Furthermore, although several deals were large, the wave of mega deals valued above CHF 5b as witnessed in previous quarters, has come to a grinding halt. While six mega deals were announced in 2014, only one has been recorded in the first half of 2015. 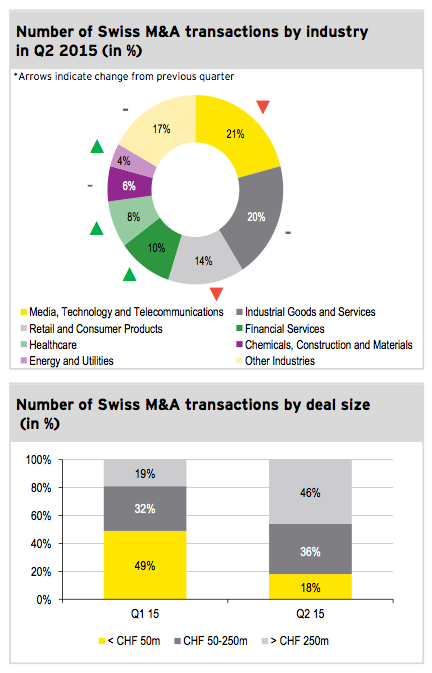 ► As predicted by several economic forecasts, the Swiss economy declined as the Swiss Franc strengthened materially following the removal of the CHF/EUR exchange rate floor in January. In its most recent report of May 2015, the Swiss State Secretary for Economic Affairs (SECO) reported a real GDP decline of -0.2% for the first quarter 2015. This is the first time since Q3 2011 that the Swiss economy has contracted.

► In detail, exports of goods (excluding non-monetary gold, valuables and merchanting) declined in virtually all sectors resulting in a total reduction of -2.3%, with a significant reduction coming from the chemicals and pharmaceutical industry. In particular the trading sector (-1.9%) and the accommodation sector (-3.8%) reported sizable slowdowns.

► If the decline in economic activity continues and, as some experts forecast, GDP growth in Q2 will be negative as in Q1, the Swiss economy will technically be in recession. However, experts agree that the economic performance outlook for the year as a whole is still positive, with SECO predicting 0.8% GDP growth and KOF estimating 0.4%.

► On a positive note and for the first time since 2010, more than half of all respondents to EY’s Global Capital Confidence Barometer study intend to make an acquisition and almost half expect to close an acquisition in the next 12 months. Combined with a 19% reported increase in deal pipelines, this brightens the outlook for the global M&A market’s development.

► In summary, the strong Swiss Franc proved to have a negative effect on Swiss M&A activity and, coupled with worsening economic forecasts, is expected to continue having a dampening effect going forward. With the M&A market performing around historic lows at the moment and given the steep decline in recent quarters, additional negative developments are not expected. Against this background and in view of select positive impulses from EY’s CCB study as well as transaction pipeline, the overall outlook on Swiss M&A activity is stable performance around Q2 levels with upside potential. 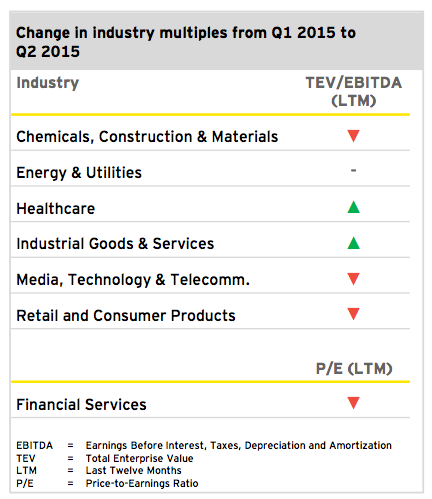 ► Deal volume in Q1 2015 was mainly driven by three mega deals valued above EUR 2b. Q2 2015, on the other hand, was characterized by an exceptionally large number of transactions, outperforming the quarterly average of 19 transactions in 2014 by 89%. This performance was mainly attributable to PE deals with German targets, which increased by 72% from Q1 2015 to Q2 2015 .

► The largest transaction in Q2 2015 was the sale of Constantia Flexibles Group GmbH by One Equity Partners LLC (75%) and H. Turnauer Foundation (25%) to the Wendel Group for a consideration of EUR 2.3b.

► One Equity Partners LLC acquired Constantia in 2009. Since then, Constantia has developed from a regionally focused flexible packaging provider, to a globally operating corporate group, with sales increasing 73% and earnings (EBITDA) 76%. 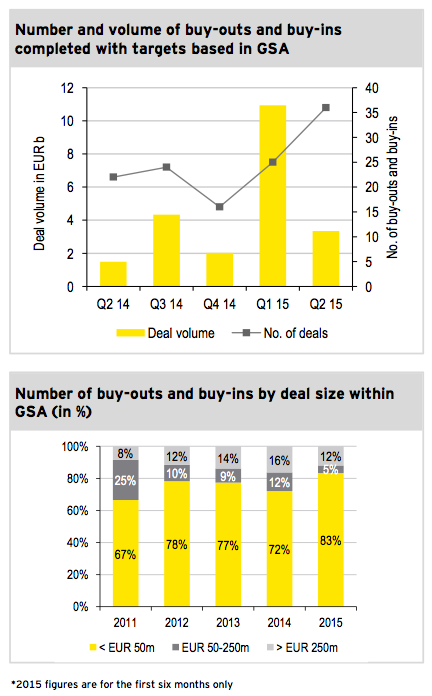 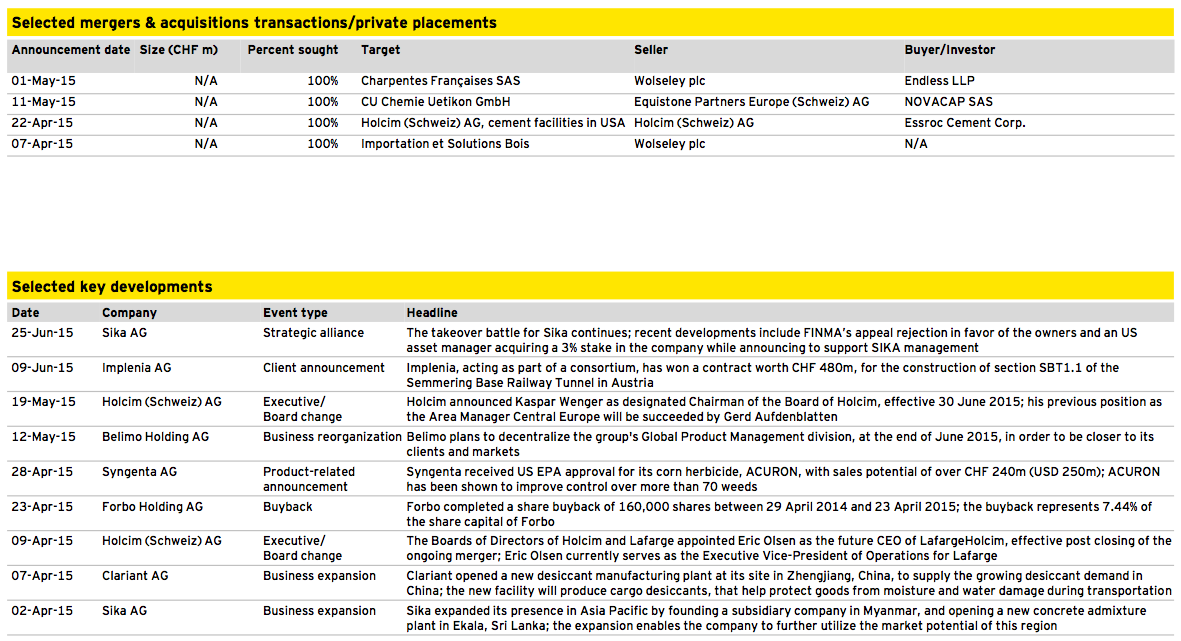 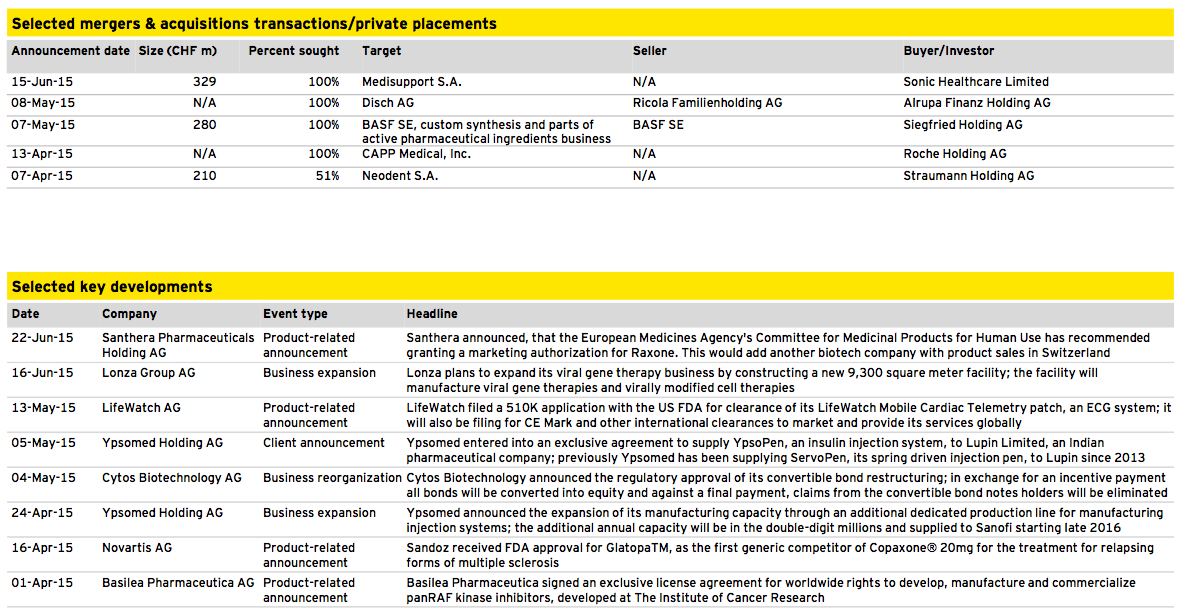 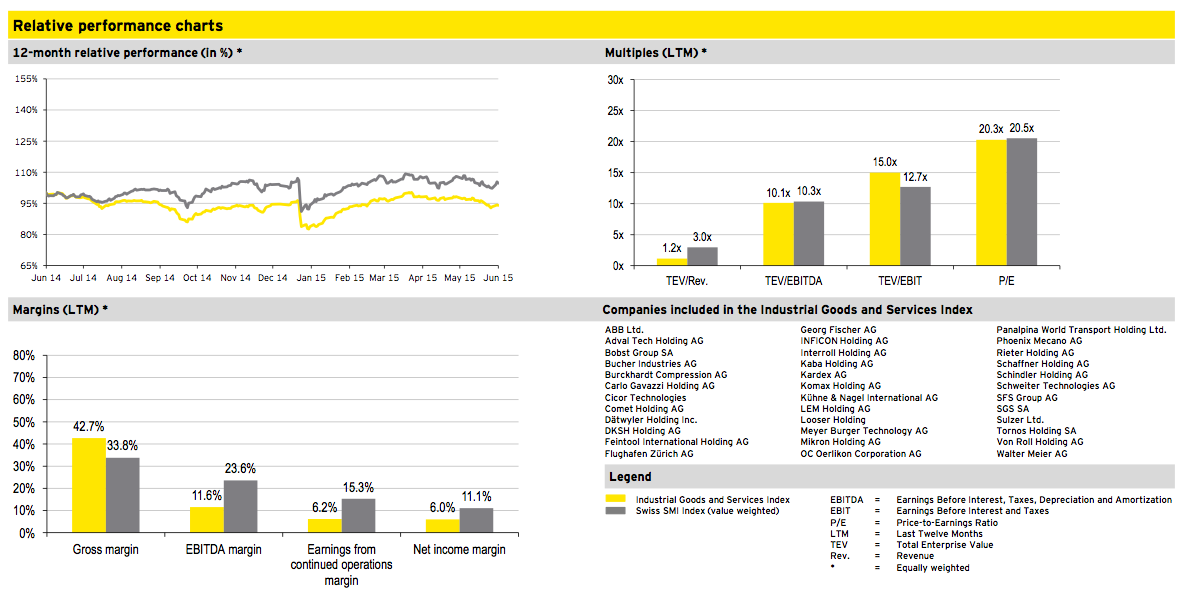 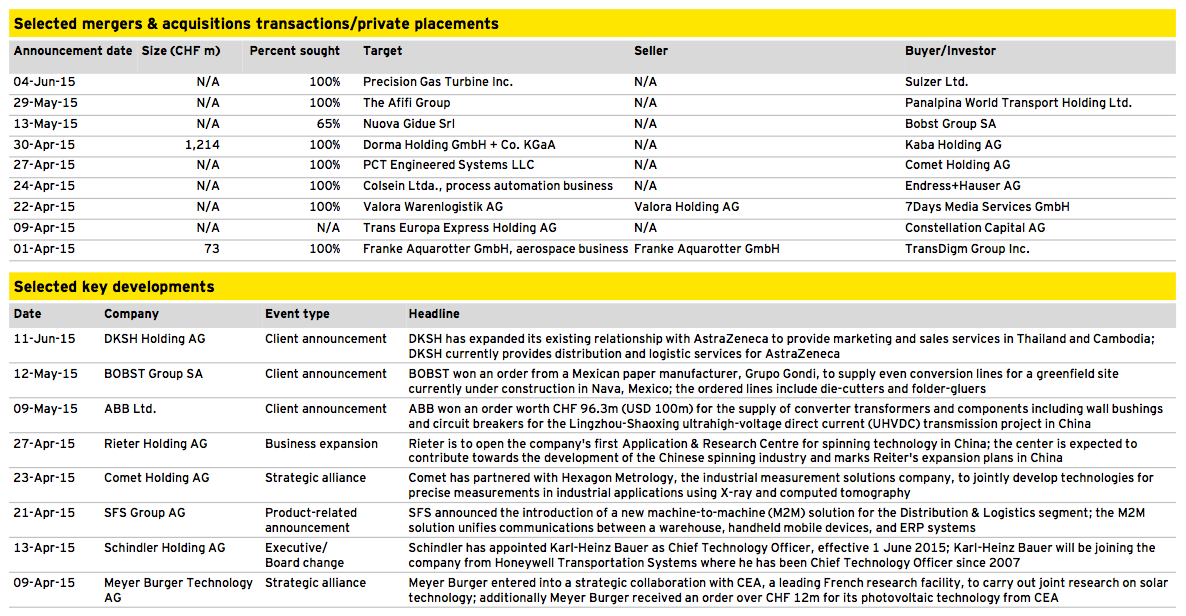 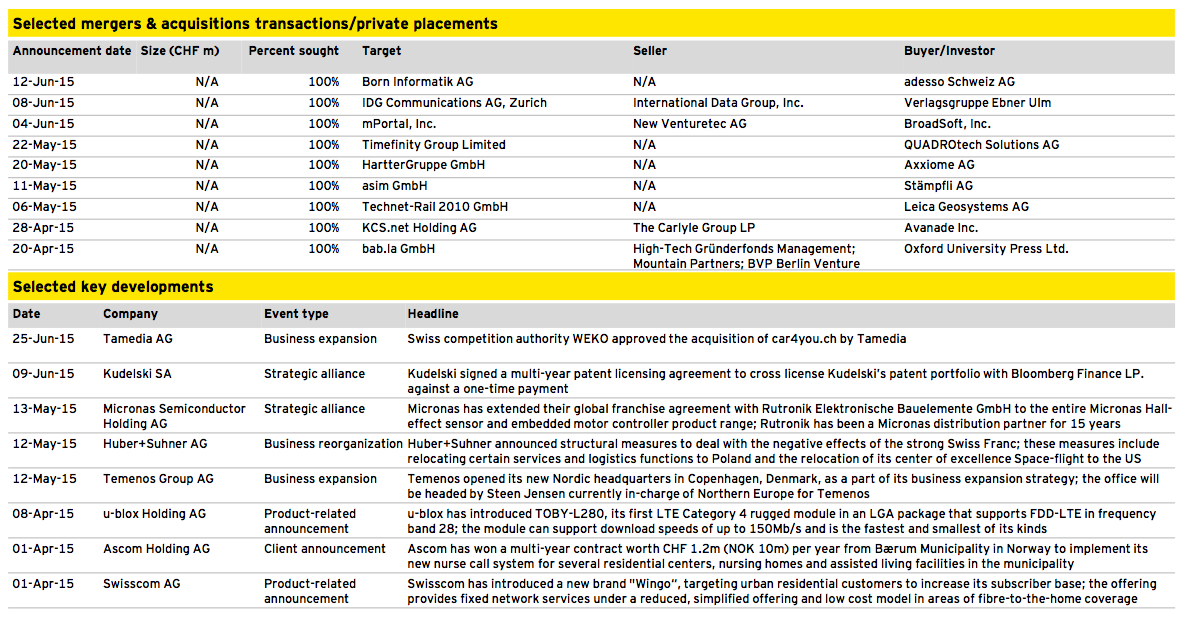 Deal of the quarter

On 30 April 2015 the Swiss KABA Holding AG and the German Dorma Holding GmbH + Co. KGaA announced their planned merger to become one of the largest security and access-control solution companies under the name of dorma+kaba. The current merger structure foresees the integration of KABA’s operations into Dorma in exchange for a 52.5% stake. The merger has been approved by the shareholders general meeting of KABA and is planned to be completed in the third quarter 2015.

The combined operations of dorma+kaba would have a pro-forma revenue of more than CHF 2bn, which would make it the third largest company on the global market for security and access-control solutions. The companies plan to achieve cost synergies of CHF 60-70m per year and target an EBITDA margin of 18%.

► The merger is to allow both companies to offer their customers one-stop-shopping for security and access-control solutions, due to complementary product portfolios, value chains and geographical presences. Through the combination, dorma+kaba plans to achieve an enhanced revenue growth of 6-7% annually.

► The potential cost synergies through increased purchasing volumes, optimized infrastructure costs and efficiency increases are being valued at CHF 60-70m per year. The full realization of these synergies is expected four years after the merger.

► The CEOs of both companies highlight the strategic fit of the merger and value creation potential for share- and stakeholders.