Mergers In The Oil Patch: Lessons From Past Downturns 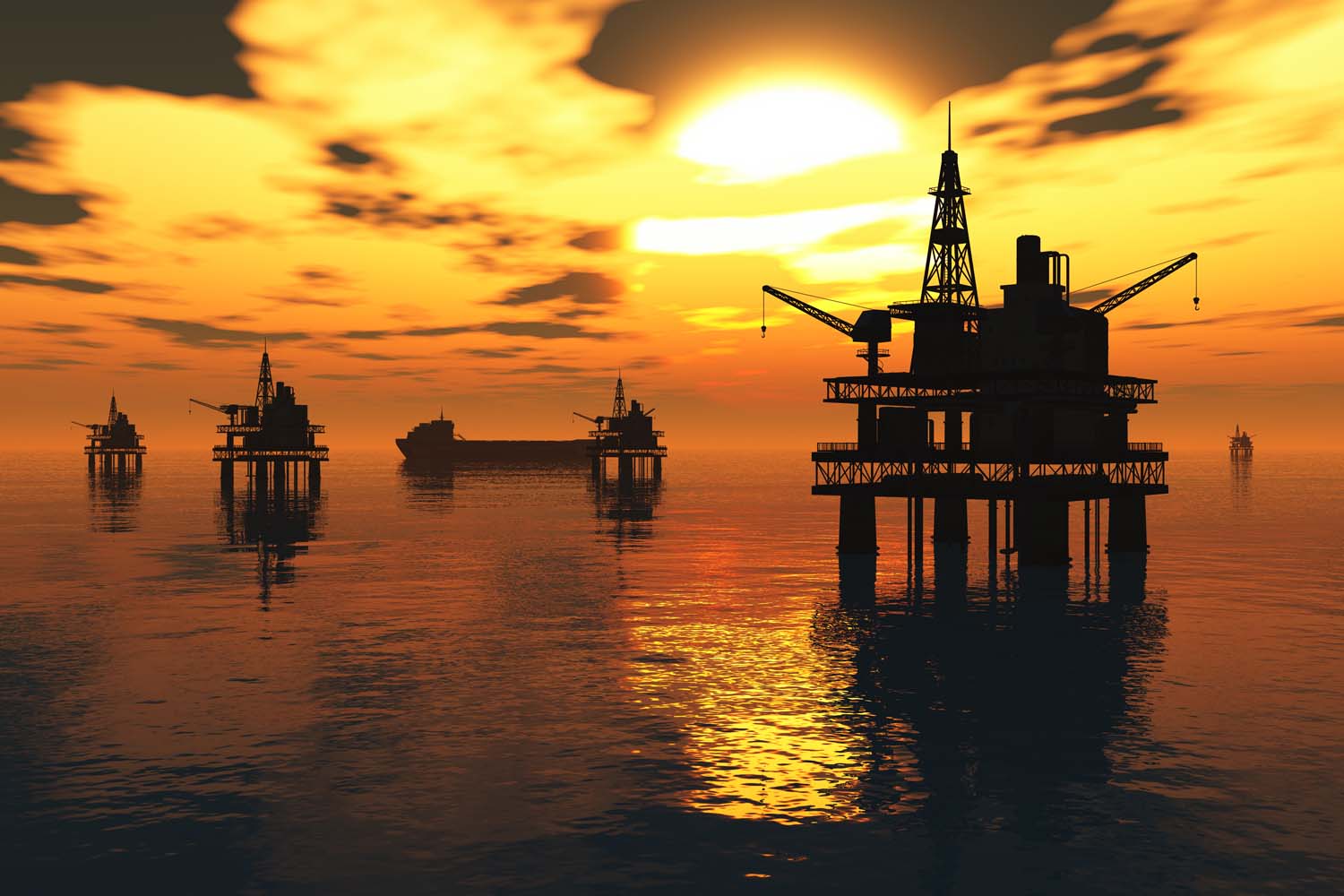 Past collapses in oil prices have prompted a deluge of deals. As activity looks set to pick up again, companies that acquire in order to cut costs are likely to be the most successful.

Mergers and acquisitions in the oil and gas sector may be coming into fashion again. In the current era of low prices, a confluence of events makes acquiring more attractive. Pricing hedges that had locked buyers into higher prices are rolling off. Debt levels are high, particularly among independent exploration and production companies with exposure to US shale production — at nearly ten times earnings before interest, taxes, depreciation, and amortization. And like most commodities industries, the oil and gas sector is prone to consolidation during the downside of its business cycle (Exhibit 1). This raises the likelihood that some companies will be available at distressed prices. Healthy companies may have been slow to start deals, but they’ll clearly want to be on the lookout to strengthen their competitive positions as new opportunities emerge.

They may find that the strategies that worked when prices were rising won’t work as well when prices are low. Our analysis of the value-creation performance of deals during a previous period of low prices, from 1986 to 1998, and the period from 1998 to 2015, which was characterized mostly by a rising-oil-price trend, bears this out (Exhibit 2). Of all these deals when prices were low, only megadeals, on average, outperformed their market index five years after announcement. Periods of flat prices appear to call for a focus on cost synergies and scale. In contrast, in the 1998 to 2015 period, when prices were generally rising, more than 60 percent of all deal types outperformed their market index five years after announcement. Not surprisingly, this kind of rising-price environment rewarded deals that were more focused on growth through acquisitions of overlapping or new assets.

To understand how different approaches to deal making would work in an era when oil prices could languish for some time, we looked at the performance record of the most common M&A strategies over the last cycle. These include megamergers, increasing basin or regional density, entering new geographies, and entering new resource types. The data do not automatically prescribe or exclude any particular deal, regardless of strategy. But they do suggest which types of deals have been more successful in past eras of low oil prices. 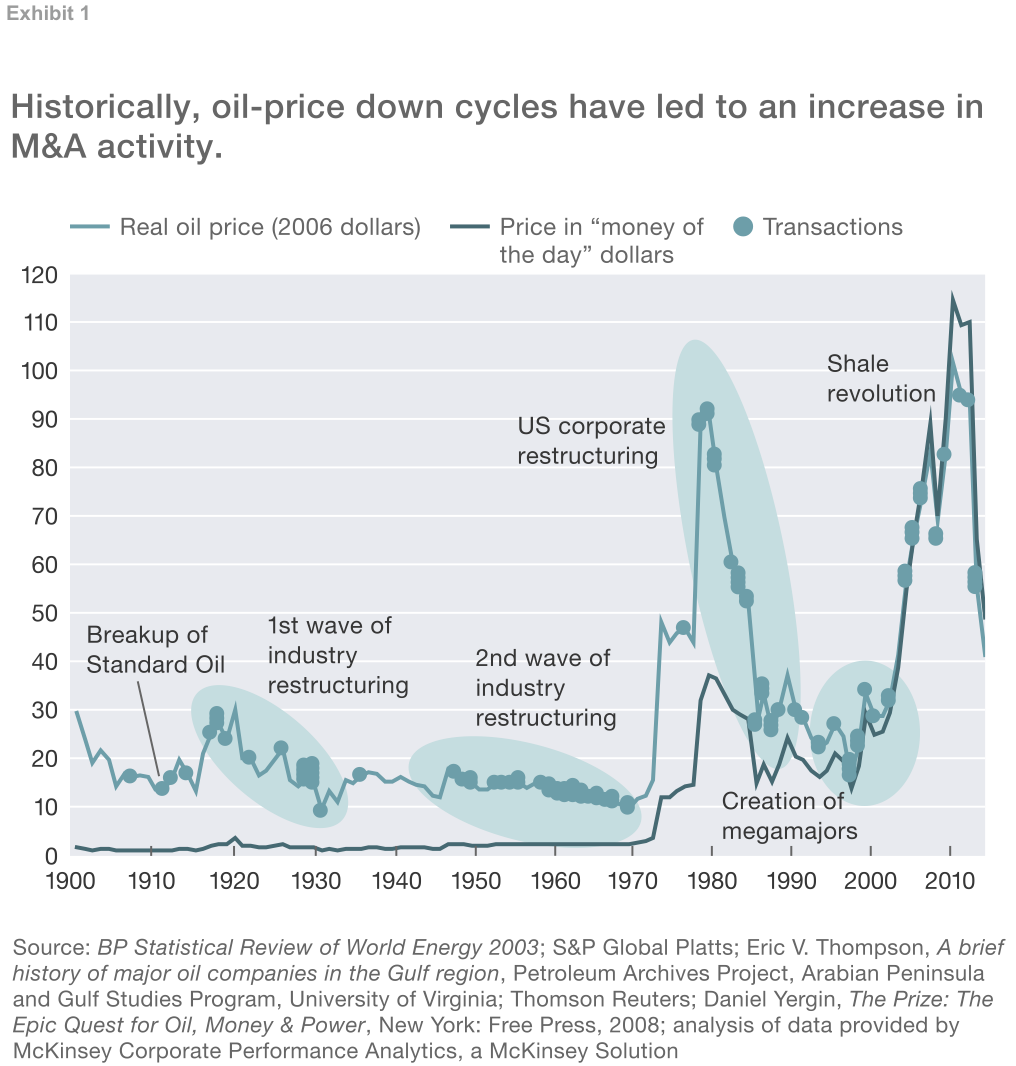 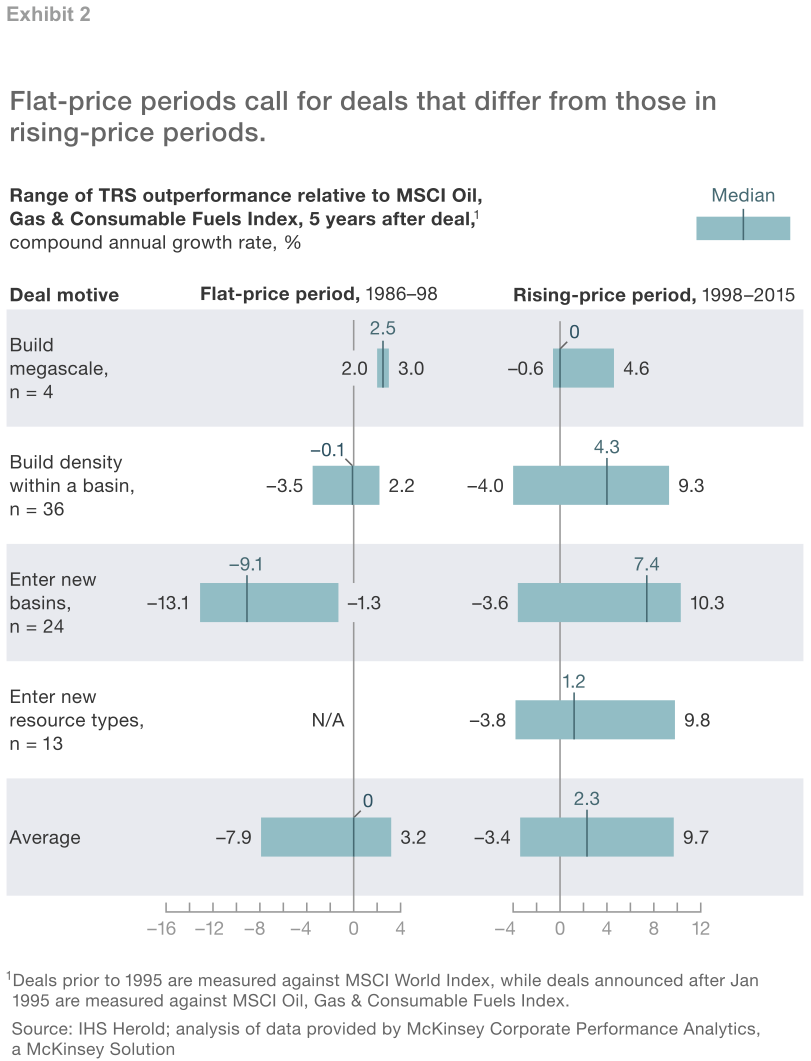 Large mergers in the oil and gas sector have historically created value through cost reduction at the corporate, region or country, and basin levels. Acquirers captured synergies, such as overhead reductions, and optimized the combined portfolios to favor the most competitive and capital-efficient projects. This resulted in significant improvements in returns on invested capital that in turn translated into shareholder returns in excess of the market index. Further, the expanded breadth of the combined company’s portfolio—both geographically and in resource types — helped extend reach. That facilitated growth and diversified the risk of megaprojects. And as oil prices rebounded and growth took off, this was rewarded in equity markets.

Take the merger of Exxon and Mobil. Announced in 1998, the deal had a strong focus on executing postmerger integration, which enabled the company to capture $10 billion in synergies and efficiencies within five years. That exceeded the $2.8 billion savings estimated when the deal was announced. The savings resulted from job cuts and stricter, centralized controls on capital spending and allocation across the postmerger company — upstream, downstream, and technology. Over the following decade the deal opened the path for significant growth, especially in the liquefied-natural-gas business.

In the rising-price period, there were no megadeals to be included in our data sample. But a number of major acquisitions in the period used value-creation levers similar to those of the earlier period. For example, Anadarko Petroleum’s 2006 acquisitions of Kerr-McGee and Western Gas Partners for $23 billion created large-scale positions in the deepwater Gulf of Mexico and US Rocky Mountains.

Both deals provided cost-savings opportunities and growth potential. Postmerger, Anadarko made substantial divestments to strengthen its finances and improve the quality of its resulting portfolio, setting the company up for a decade of organic growth. In today’s environment, any large-scale acquisitions that do occur are likely to create the opportunity for significant cost reductions using these same levers.

Our analysis found that when oil prices were low, deals that increased basin or regional density created value more or less in line with the benchmark index. In contrast, when prices were rising, these regional transactions outperformed the benchmark. In principle, these deals facilitate cost-reduction opportunities because the acquirers are already established operators in the area. They know the geography and geology, the practices, and the people (internal and external) necessary to get the most production possible from these assets. In addition, they can capture synergies by cutting regional overhead costs, consolidating vendor contracts within basins (where many onshore providers are regional rather than national), and optimizing overlapping operations (for example, increasing the efficiency of pumpers and other parts of the supply chain).

Chevron’s $18 billion acquisition of Unocal in 2005 highlights characteristics of a successful deal that increased regional density. In Thailand, Chevron consolidated acreage under the Unocal manufacturing model for drilling, which enabled it to increase volumes and reduce costs significantly. In the Gulf of Mexico, acquiring Unocal put Chevron in a position to move from exploiting individual wells to developing an integrated hub. This enabled Chevron to make much more efficient use of its capital, reducing costs. While the acquisition was regarded in the industry as having a high deal premium, other factors that boosted value creation included Chevron’s insights on the acquired resource’s potential (based on the acreage it already controlled), strong merger-management execution, and the benefit of a rising-oil-price environment.

For companies entering new basins within their existing resource type — such as a shale producer entering new regions or a deepwater operator expanding to foreign offshore basins — our data show a clear contrast in performance between the two pricing environments. Such deals tend to create value during periods of rising prices and destroy value when prices are flat or depressed. By nature, such deals offer few cost-reduction opportunities, as there are limited synergies in operations for the acquirer to tap. In a rising-price environment, however, a lack of cost synergies may be offset by the overall value created by higher and expanding margins coming from top-line growth. Other value-creation levers may be at play, as well — for instance, if the acquirer sees greater potential in a resource than its current owner does.

Examples of successful deals abound from the past 15 years. For example, consider Encana’s $2.7 billion acquisition of Tom Brown in 2004. The deal established the company’s gas-production position in a number of new basins in the Rocky Mountains and Texas. On the other hand, Burlington’s $3 billion acquisition of Louisiana Land & Exploration in 1997 suggests what can go wrong when prices are flat. The acquirer expanded in areas including Louisiana, the Gulf of Mexico, Wyoming, and overseas but overpaid for mature assets, with no opportunities for synergy capture to help returns. Burlington lagged behind its index by 7 percent over the next five years and was itself acquired in 2006.

This theme is typically a portfolio-expansion strategy, such as an onshore producer seeking to add offshore operations or a company with conventional operations entering unconventional gas and shale-oil basins. Our data set does not have examples of such deals during the period of depressed oil prices. There have been a number of value-creating deals in the rising-price period, but there are also a number of examples of companies encountering difficulties even in this environment.

Foreign companies that have entered North America to build exposure to unconventional shale assets provide mostly cautionary tales. Some of these companies lacked the expertise for local land acquisition (a competitive advantage for most high-performing shale producers) and needed to travel the learning curve to gain the capabilities necessary to be efficient producers. As a result, these transactions were value destroying.

By nature, deals defined by this theme do not offer the kind of cost-reduction opportunities that can help ROIC performance in a period of low oil prices.

Another big wave of M&A activity in the oil and gas industry could soon break. As leading players in the sector plan their moves, they should recognize that deals offering cost-reduction opportunities are likely to create the most value in a lower-for-longer oil-price environment. At the same time, excellence in M&A practices throughout the deal process — from the identification of opportunities to postmerger integration — will remain an important contributor to value creation.