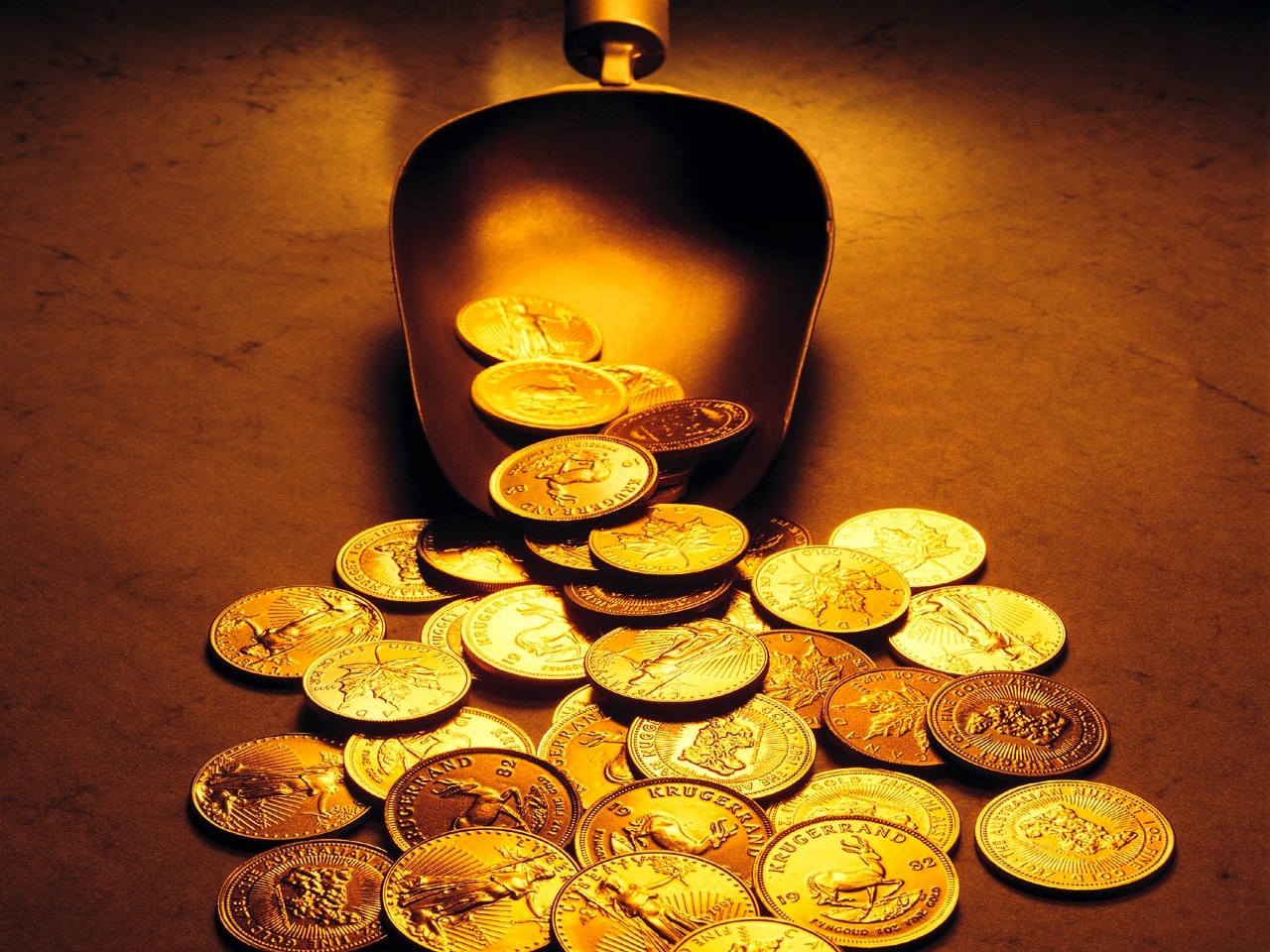 Corporate leverage, aided by financial institutions, fuelled the pre-crisis boom. The subsequent shift of debt from corporates and financial institutions to sovereigns has been one of the most significant outcomes of this ‘new’ normal world. Even as sovereigns took on increasing debt through rescue packages, the corporate sector managed to deleverage substantially through rigorous cost optimisation drives. This, coupled with astute fiscal management, allowed the corporate sector to build record levels of cash reserves. It is therefore not surprising that this period coincided with a drastic decline in M&A volumes.

Market commentators frequently cite the record levels of cash as the driver that will bring back M&A volumes. Deloitte UK analysed the cash reserves of FTSE 100 non-financial companies and explored the spending patterns exhibited by large cap (capitalisation) companies. Deloitte UK found that when the cash reserves and historical spending patterns of companies are compared a far more complex picture emerges. 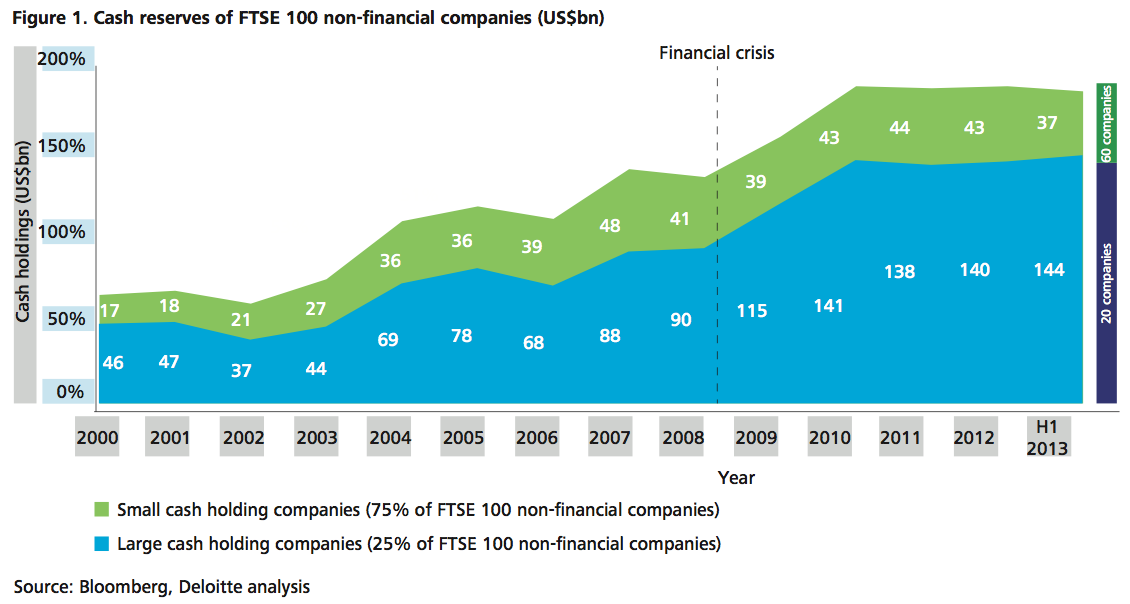 The haves and have nots

In contrast, the small cash holding companies had a balance of $41 billion in 2008 that remained fairly constant throughout the crisis years and currently stands at $37 billion.

How companies spend their cash

Deloitte considered the spending patterns of these two sets of companies by analysing their capital expenditure and the proportion of cash from operations allocated to this spending category.

On the other hand, the small cash holding companies channelled just 42 per cent of their cash from operations towards their capex in 2012, lower than their long-term average.

Unlike their large cash holding counterparts, they have not increased their capital expenditure exponentially. It rose by just 11 per cent from $27 billion in 2007 to $29 billion in 2012.

Both sets of companies have increased their capital expenditure in recent years, though at markedly different rates. 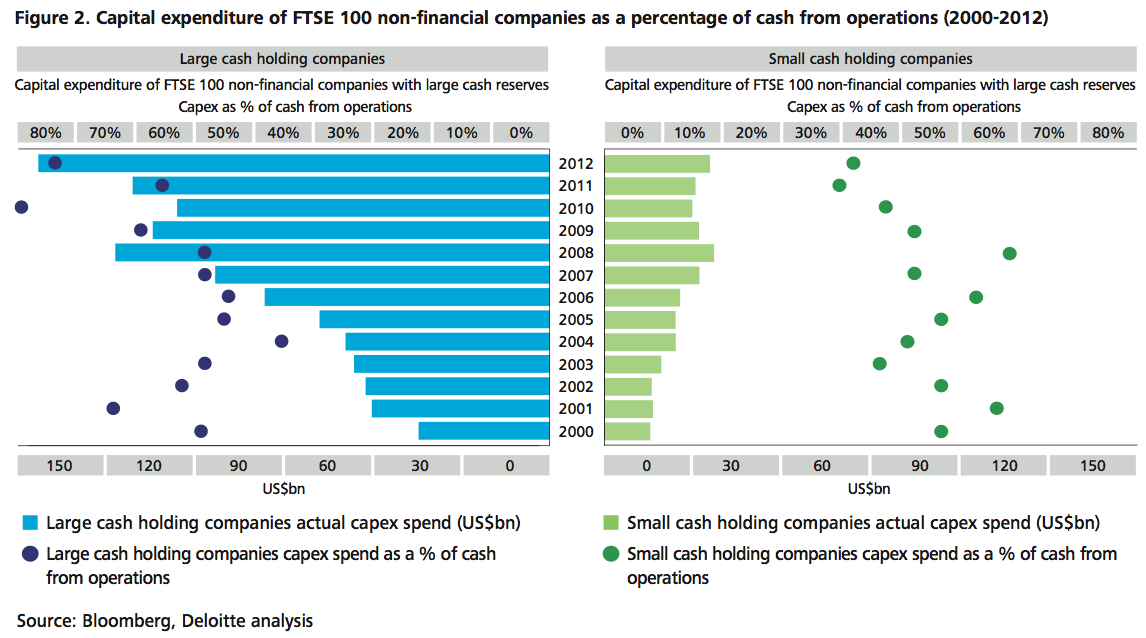 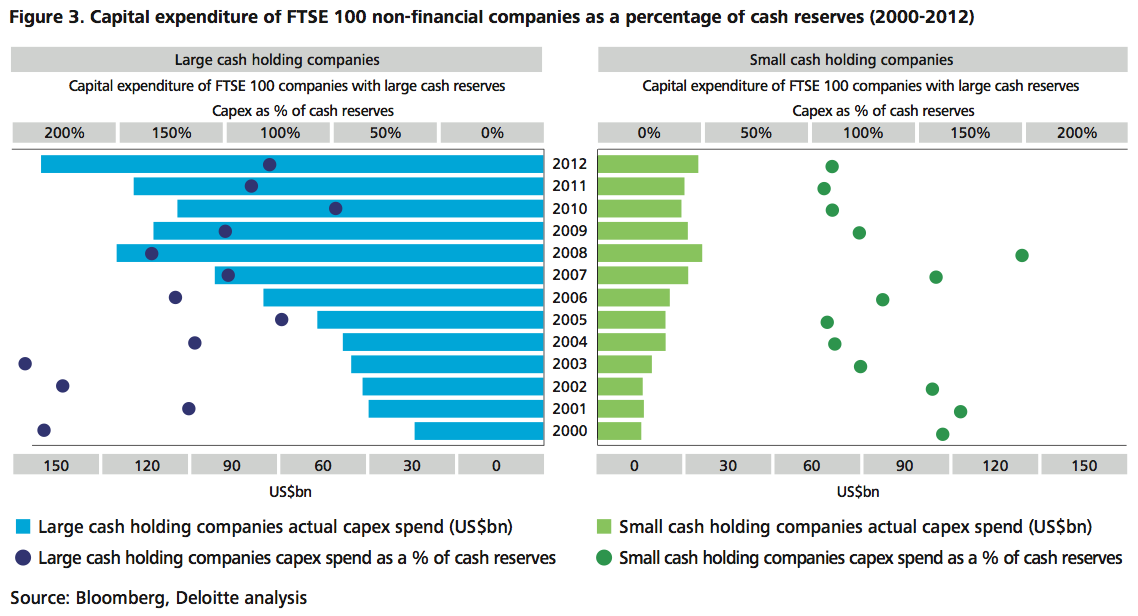 How companies spend their cash

Considering the above, it seems that large cash holding companies reduced both their capex and M&A spending immediately after the financial crisis, choosing to preserve cash instead.

Though spending resumed in 2011 and 2012, this still represented just a small outlay when total cash reserves are considered suggesting that they remain fiscally conservative and keen to maintain their fiscal buffer. Small cash holding companies, however, are more bullish in pursuit of growth and have been consistently more aggressive toward M&A.

Much of the spending on capex and M&A   has come through the raising of new, readily available debt suggesting that companies are comfortable with the shape of their balance sheets. Total debt of the large cash holding companies rose 15 per cent from $415 billion to $477 billion from 2012 to 2013. Small cash holding companies total debt rose 11 per cent from $179 billion to $199 billion in the same period. This suggests that both sets of companies are again looking to leverage their balance sheets in the search for growth. However, the means to achieve that growth is being sought in differing ways.

Deloitte analysis suggests that the markets are more rewarding of companies who are willing to take a bullish attitude towards growth and engage in M&A activities. 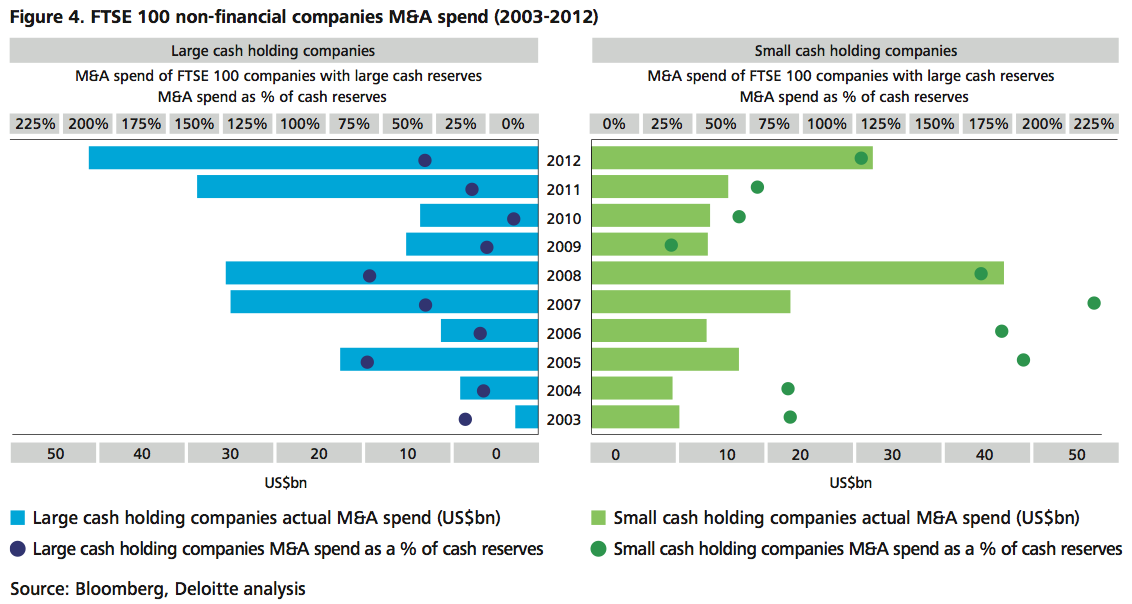 The diverging attitudes towards cash accumulation and spending are put into context when the relative performances of both sets of companies are considered. The small cash holding companies have experienced higher revenue growth since 2006 and this can be partly explained by their M&A activities.

More striking is the relative share price performance of the two sets of companies. After a sustained period of similar performance, there has been a decoupling since 2010 with the small cash holding companies producing better returns. It seems the markets are rewarding their relentless pursuit of growth through both organic and inorganic means. 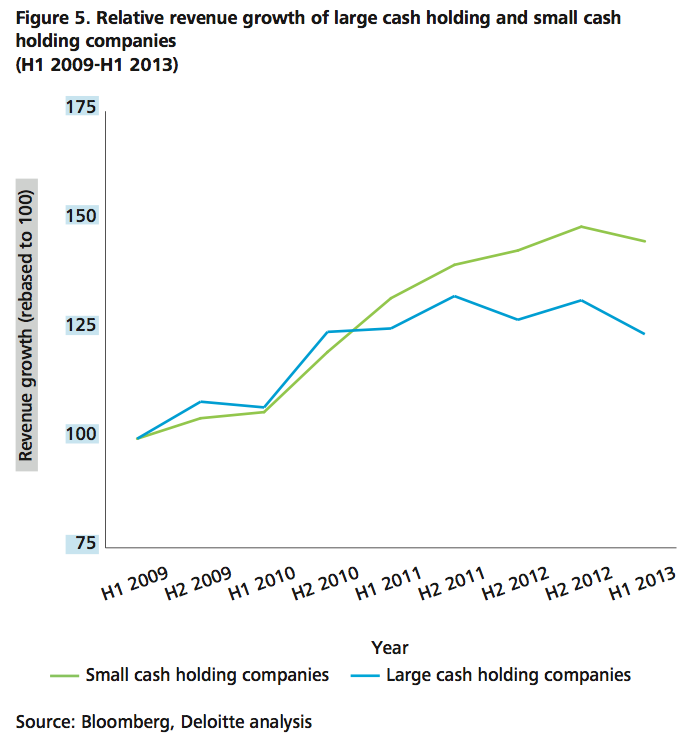 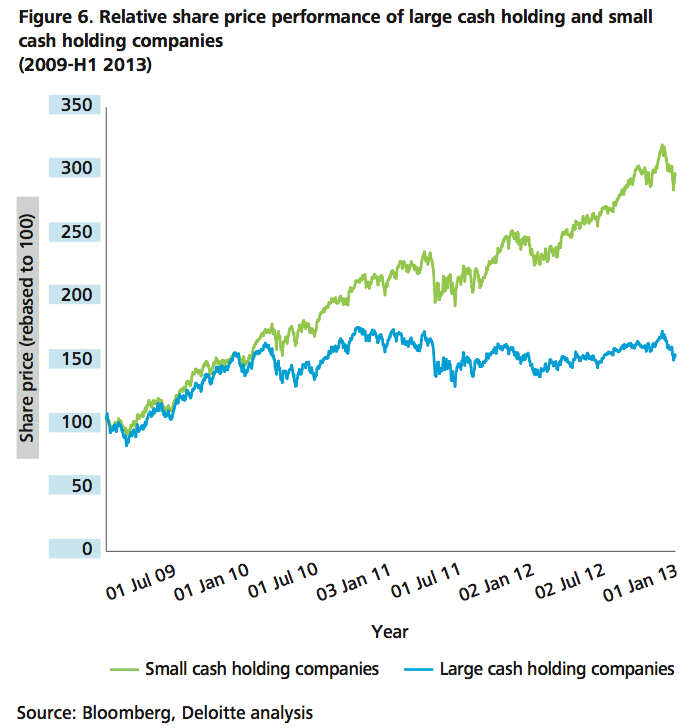 The large cash holding companies have been financially conservative and this has allowed them to stage a soft landing. However, this could well prove to be a double-edged sword, dragging them into a vicious circle of cash accumulation.

The current conditions of low valuations, inexpensive debt and record cash reserves all provide an environment conducive to dealmaking. Deloitte analysis suggests that the markets are more rewarding of companies who are willing to take a bullish attitude towards growth and engage in M&A activities.