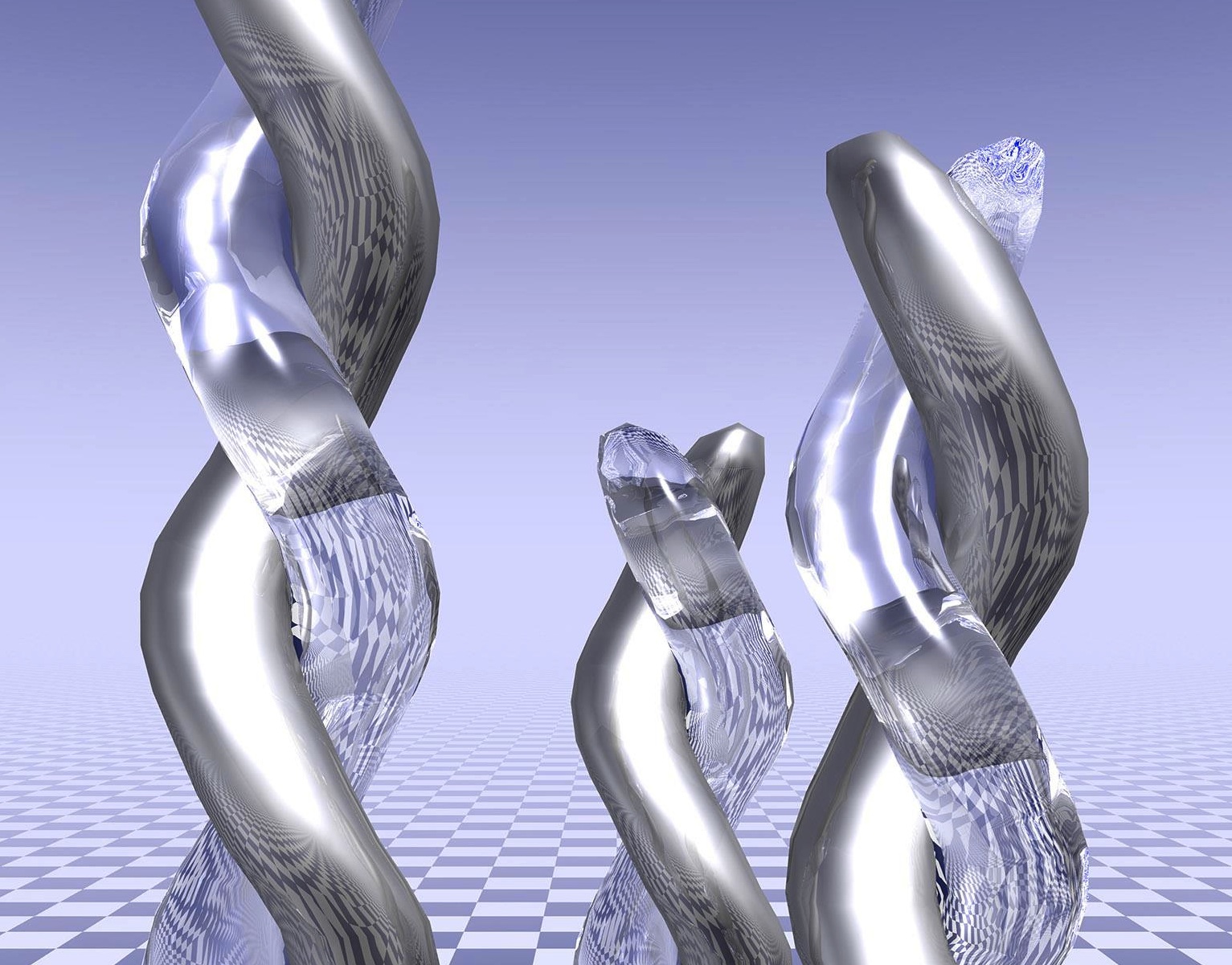 Companies that do many small deals can outperform their peers—if they have the right skills. But they need more than skill to succeed in large deals.

Measuring the value that mergers and acquisitions create is an inexact science. Typical analyses compare share prices before and after a deal is announced, using short-term investor reactions to indicate how much value it would be likely to create. One benefit of this approach is that it provides a measure of expected value unaffected by other variables, such as subsequent acquisitions or changes in leadership.

Yet relying on market reactions to gauge value creation has drawbacks. It skews the results to larger deals, which have the heft to affect share prices, and underrepresents smaller ones—even though they account for a majority of M&A. It can also underestimate the amount of value created by multideal strategies whose real worth develops over the longer term. Researchers also frequently collapse their data into a single average for the purpose of generalization. That obscures important differences between industries and M&A strategies.

To address those shortcomings, we analyzed the excess shareholder returns of the world’s top 1,000 nonbanking companies, which completed more than 15,000 deals over the past decade. While it’s clear that factors other than the deals themselves influenced excess returns over that time, the data are strong enough to show and compare distinct patterns of deal making. When we segmented companies by the scope of their M&A programs (Exhibit 1), we found that long-term returns vary significantly by deal pattern and by industry. The implication is that across most industries, companies with the right capabilities can succeed with a pattern of smaller deals, but in large deals industry structure plays as much of a role in success as the capabilities of a company and its leadership. 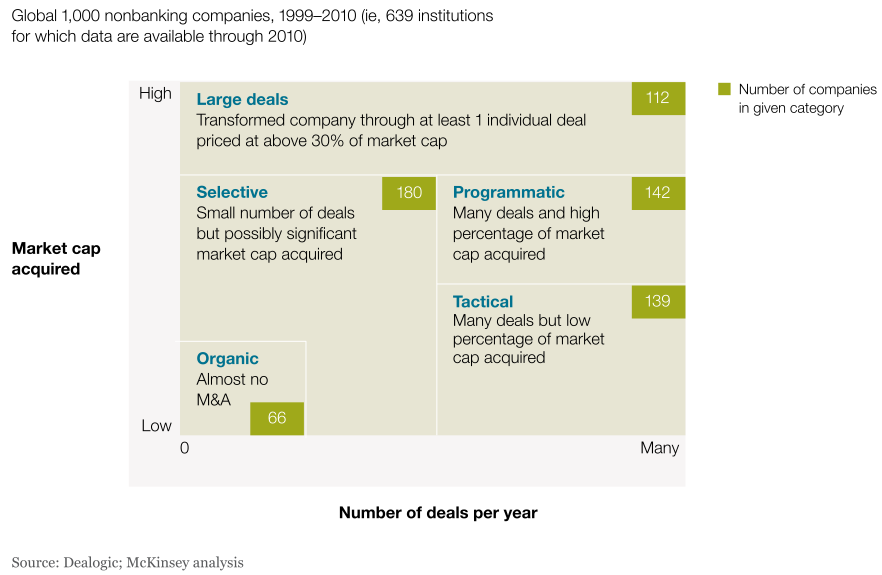 Because we look at excess returns over a full decade, we’re better able to correlate longer-term strategies with shareholder returns and company survival rates. The data confirm that the larger companies get, the more they rely on M&A to grow: 75 percent of those that remained in the top 500 used active M&A programs, including 91 percent of those that stayed in the top 100 (Exhibit 2). A majority of these companies complete many smaller deals, with no large ones. This finding makes sense, since large deals tend to be hit or miss. A correlation of the identified patterns of M&A with long-term excess returns shows that the only companies that had, on average, negative excess returns were those that did large deals (Exhibit 3). The odds of positive excess returns were slightly better for shorter time frames after specific deals, with about half generating positive excess returns within two to five years of the deal.

Companies using any of the other approaches to M&A showed positive excess TRS relative to global industry indices. Those with a more programmatic pattern of M&A (defined as many small deals that over time represented 19 percent or more of the acquirer’s market capitalization) on average performed better than companies relying on organic growth. They also had a higher probability of positive excess returns. Finally, the data suggest that a growth strategy built around a series of small deals can actually be less risky than avoiding M&A altogether. Organic strategies showed the greatest variability in excess TRS between top performers and companies in the lowest quartile, while programmatic and tactical M&A had the smallest range.

Exhibits 2-3. The larger companies get, the more they use M&A to grow. 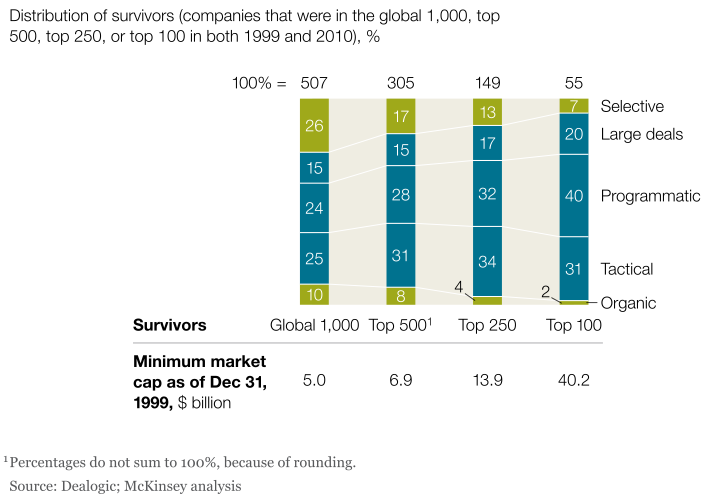 Exhibit 4. Companies using a programmatic strategy are the most successful. 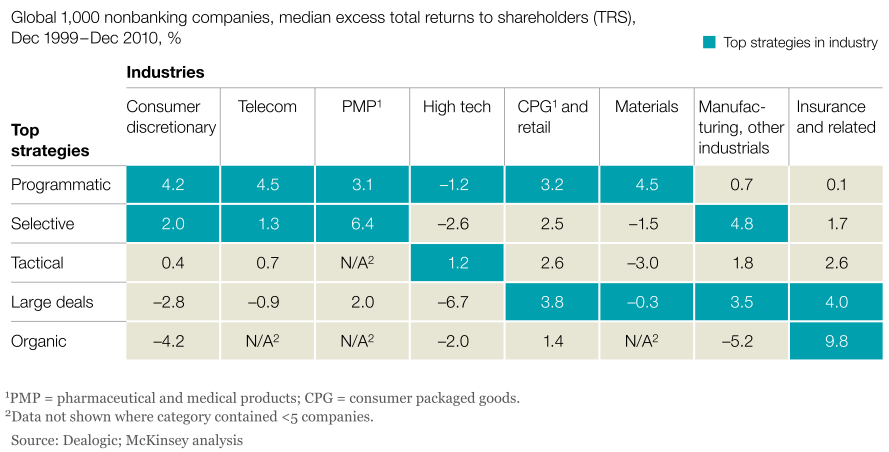 The importance of industry specifics

As compelling as these global averages might be, they do not answer the question of whether an individual company in a specific industry at a given time should engage in M&A. Indeed, the averages conceal what are frequently the most relevant details, such as industry structure, the match of an asset with a well-articulated strategy, and the execution capabilities required to realize value. As our previous analysis showed, returns by M&A approach are widely distributed and can obscure individual results. Consider the data on an industry-by-industry basis (Exhibit 4). The results vary widely but patterns do emerge.

Large deals. Companies are more successful with large acquisitions—those worth more than 30 percent of the acquirer’s market capitalization—in slower-growing, mature industries. Here, there is great value in reducing excess industry capacity and improving performance, and a lengthy integration effort is less disruptive.

In contrast, large deals in faster-growing sectors have been less successful, with –12 percent excess TRS in the five years after such deals, significantly lower than the 4 percent excess TRS for companies in slower-growing industries over a similar period. Why did companies in faster-growing sectors underperform? Many focused inwardly during the lengthy integration required for large deals, missing critical product or upgrade cycles. Others attempted to expand into complementary businesses, where targets had limited overlap in products and technology. In addition, over the period we reviewed, we found that these companies tended to do large deals in years when market valuations were generally high. Tech companies, for example, have fallen into all three of these traps.

Of course, the success of large deals also depends on a company’s strengths and its leadership’s ability to guide it through a year or more of integrating a large acquisition, as well as other factors idiosyncratic to specific deals.

Programmatic deals. Companies across a variety of industries do well using the programmatic approach. In most sectors for which we had sufficient data, it tended to score in the top two strategies (based on excess returns over the last decade). Companies using the strategy completed many acquisitions that together represented a material level of investment as a percentage of market cap. In addition, we found a volume effect—the more deals a company did, the higher the probability it would earn excess returns.

Evidence shows that executing a high-volume deal program requires certain corporate capabilities but not necessarily a specific industry structure. Most programmatic acquirers prioritize one or two markets or product areas where they can build businesses with leadership positions. For example, IBM’s program of acquiring smaller software firms succeeded because the company could offer acquired businesses access to global markets, which they had lacked. The program was so successful that IBM now publishes both metrics for success (in the form of improved growth and margins for targets after an acquisition) and its goals for additional profit from future acquisitions.

In much the same way, most big pharmaceutical companies embark on a series of smaller deals and licensing arrangements with companies that do not have a global commercial footprint. In some cases, big companies are also looking to find new growth opportunities. In the late 1990s, German industrial conglomerate BASF, for example, determined that it could grow more quickly and profitably if it shifted its focus to specialty chemicals—an area in which managers believed they could create value through their technical skills and understanding of customer needs. The company then shed its commodity chemical operations and acquired specialty companies and businesses, which it quickly integrated.

In another series of deals, The Walt Disney Company acquired brands such as Baby Einstein and the Muppets, lending the power of Disney’s global profile to expand their market and reach. Acquisitions of Club Penguin and Marvel Entertainment were similar: the former gave Disney a product in a new distribution channel; the latter allowed it to pick up content that’s popular with teenage males—a relatively tough demographic for the company.

Tactical deals. Companies using a tactical approach to M&A also do numerous small deals, but those deals do not, combined, make up a large portion of the acquirer’s market capitalization. Nonetheless, M&A still is an important part of the strategy.

Tech companies were significantly more successful with this approach than with the others: they used M&A as part of an innovation and capability-building strategy, buying options and adding functions.

Microsoft, for example, has a history of adding features to its core products through M&A to give users incentives to upgrade. Many smaller products acquired by the company found their way to the next release of Excel, and the upgrade cycle provides continued revenue for the franchise. Manufacturer Foxconn Electronics executed more than 20 small strategic and equity outsourcing deals over the decade. Some were intended to expand its capabilities from PC assembly into digital cameras, handsets, and networking equipment, to name a few things. Others eased the company’s vertical integration into components, with the goal of serving end customers better and thus helping the acquired businesses to grow.

Industrial companies in this segment seem to use tactical M&A to fill gaps in products or channels. This approach is quite similar to programmatic M&A, but not on the same order of magnitude. Caterpillar, for instance, used M&A to round up its product portfolio by purchasing companies that made diesel engines, railroad and mining equipment, and specialized repair gear. In all likelihood, industrial companies in this category are somewhat limited by the number of small targets available in their industries.

Selective deal making. Many companies do deals occasionally but don’t appear to have an M&A capability or a proactive M&A strategy. Most of the companies in this segment spend less than 2 percent of their market cap a year on M&A. Their total shareholder returns are in all likelihood driven more by an organic-growth tailwind than by M&A strategy. The rest of the companies in the segment are individual cases, many stemming from unlucky one-off deals at the end of the 2001 tech bubble. It is therefore hard to conclude that the performance of this group is based on a clear M&A strategy. More likely, these were solid companies that engaged in occasional pragmatic deals to support the growth of the underlying business.

It’s possible to understand M&A performance better by taking a finer-grained look at patterns of deal activity. The success of large deals tends to depend more on the industry where they take place, the success of small ones more on the capabilities of the acquiring companies.