Reflections On A Gravity-Defying Year For Insurance M&A 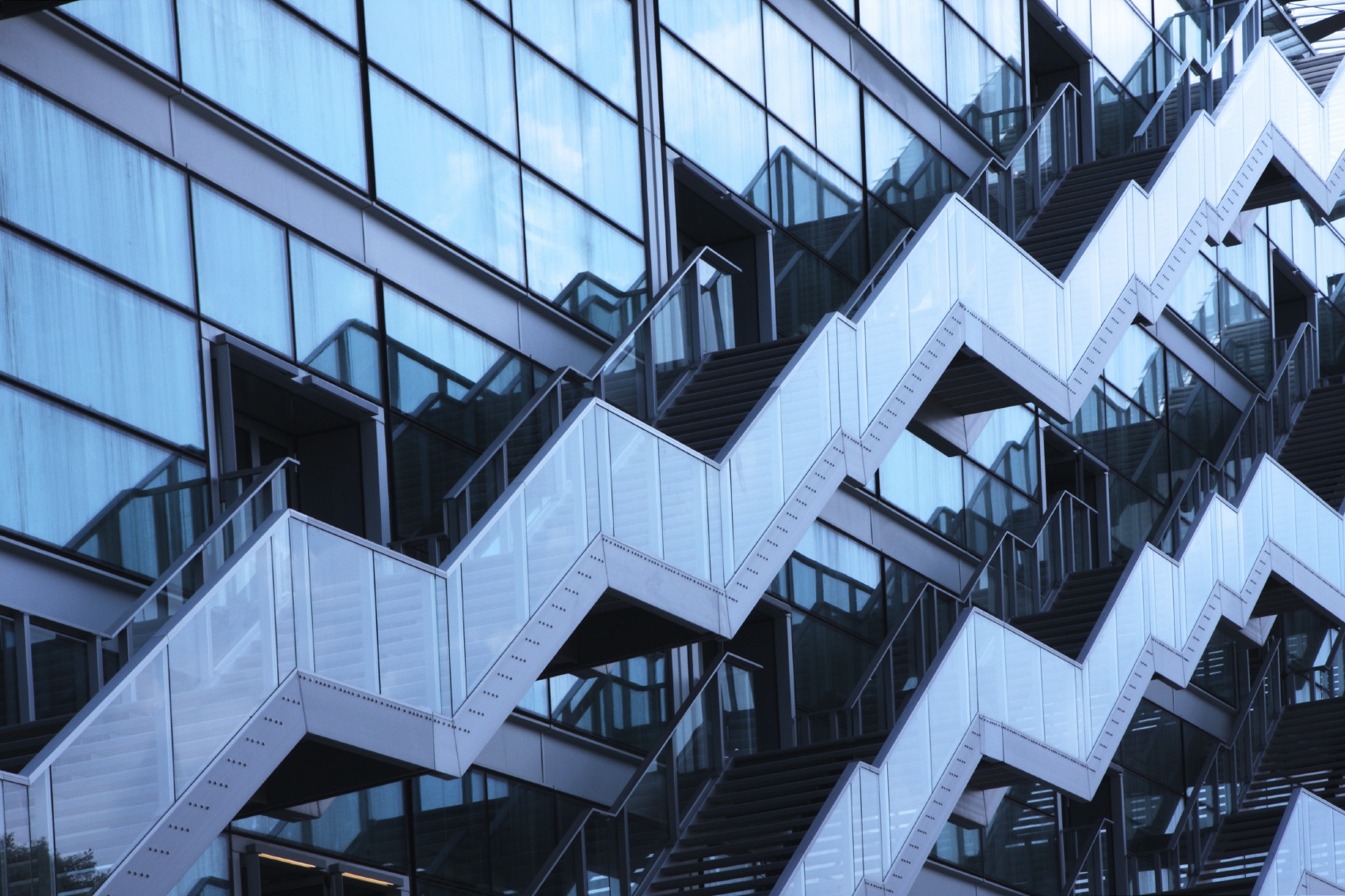 Insurance was one of a number of business sectors to enjoy a banner year for merger and acquisition (M&A) activity in 2015. Willis Towers Watson’s latest M&A study, a joint effort with Mergermarket, analyzes the drivers in the surge in insurance deals and the priorities for deal makers over the next three years.

Global M&A activity in the insurance sector hit dizzying heights in 2015, with €129.3 billion (US$143.5 billion) worth of transactions announced in the first nine months of the year — more than triple the value of all 2014 deals and comfortably exceeding the previous annual high of €97 billion (US$107.7 billion) in 2010.

This spending frenzy provided the backdrop for Defying Gravity: Insurance M&A on the Rise, the latest analysis of M&A trends in the insurance market by Willis Towers Watson and global intelligence provider Mergermarket. For the first time, the report looked at the global market rather than just focusing on Europe, the Middle East and Africa (EMEA). During the first half of 2015, 750 senior executives were interviewed. Participants were evenly split between the

life and P&C industries in EMEA, the Americas and Asia Pacific regions. Only organizations that had considered an acquisition in the previous two years were included, of which 86% had completed at least one deal.

The resulting analysis underlines the continuing importance of M&A in the growth strategies of many insurance companies. At the same time, it flags some interesting emerging and developing trends.

The Drive for Top-Line Growth

Previous editions of the report showed margin growth as the most significant driver of M&A activity. And this focus on the bottom line is evidently still important to insurers around the world, a trend illustrated by the continuing interest in assets that enhance technological capability and operational efficiency.

But almost half of insurers doing deals in the last two years said they had been primarily motivated by seeking to enhance their market position and increase customer numbers (Figure 1). Top-line revenue growth was the key driver of deals and also most important in determining price, followed by the attractiveness of the target’s distribution. This desire for turnover was also evident in the preferred metrics used to evaluate transactions, with less emphasis on return on capital, and more on sales volume and market penetration-type information.

These findings are indicative of how competition and general economic pressures have recently caused companies, particularly in mature markets, to struggle to grow organically. For many, revenue growth achieved through greater scale may represent the best chance of outperformance.

Most insurers said they are looking to use M&A to consolidate an existing market position rather than to branch out geographically, although over half (and a higher proportion of P&C insurers) are considering expanding into new sectors or products. Overall, four out of five insurers that are planning acquisitions said they expect to focus on consolidation in core markets. Certainly, it is rare for firms to buy into a new territory. Just 8% of respondents had no operations in deal target markets; by contrast, around two-thirds of insurers considered themselves already among the market leaders where they targeted transactions.

Of course, there are exceptions. International insurers are seeking opportunities to establish or build a footprint in developing markets, such as those in parts of Central and Eastern Europe, Asia and Latin America. Firms domiciled in Bermuda or at Lloyd’s of London are most likely to pursue geographic expansion, reflecting the international nature of their business models. Perhaps the most important exception relates to the recent acquisitions by Asian insurers of U.S. insurers. The Dai-ichi/Protective megadeal in 2014 led to four other deals during 2015 in which a Japanese or Chinese company acquired a U.S. insurer.

In Search of Modern Distribution

The continuing focus on distribution capability found in this year’s analysis is also likely to be symptomatic of firms’ heightened interest in top-line growth and building the customer base that supports it. Equally, it demonstrates the recognition of the competitive environment in which many companies find themselves.

The emphasis placed on different distribution models varied by region. For example, independent or tied agencies were important in 23% of developed Asia and Latin America deals. Meanwhile, bancassurance was key in a number of deals in Central and Eastern Europe (24%), developed Asia (14%) and the Middle East (11%).

However, insurers around the world concur on the importance of digital distribution to the future of their businesses (Figure 2). It is already a significant driver of deals in markets such as Western Europe and the Middle East, both on cost grounds and to provide access to new customers. But a number of insurers also highlighted its importance in emerging markets such as Africa — recognition that insurance is ideally suited to taking advantage of access to mobile technology and the possibility that this creates for leapfrogging more traditional distribution platforms. 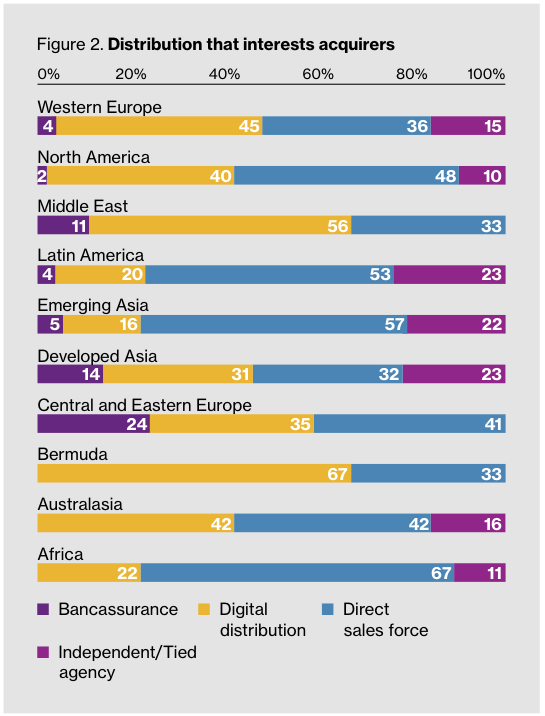 Money on the Move

There’s no shortage of money-chasing deals in the insurance industry. Competition for assets has come from multiple sources, both local and international, within the industry and from financial investors, including private equity.

A notable trend is the growing importance of Asia — both as a target market for acquisitions and as a source of investment. The Asian market is expected to be a center of M&A activity over the next three years. More than half of respondents saw emerging Asia as the marketplace where activity will rise most significantly, driven in part by the strong acquisitive appetite of some companies in the region. At a global level, Asian competitors, along with non-insurance investors, were also seen as key players in deals in the developed markets of Western Europe and North America.

Not surprisingly, plentiful cash reserves held by many insurers have dominated deal funding despite cheap capital in many markets. Over 80% of deals used cash reserves, including some generated by asset sales as a result of consolidation strategies. Just 8% of insurers issued new equity to fund a transaction.

The Asian market is expected to be a center of M&A activity over the next three years. More than half of respondents saw emerging Asia as the marketplace where activity will rise most significantly.

More than a quarter of the deals in the study weren’t completed. Contributing factors included price, competitive bids, regulatory concerns and economic volatility, to varying degrees depending on the location of the transaction.

Whatever the reason, M&A teams lose a considerable amount of productive time due to the volume of uncompleted deals. The potential always exists for deals to fall through, but time and resources can be spared if executives head off the more predictable challenges with careful planning and execution.

Getting a deal over the line is, of course, only a means to an end. The value created for stakeholders and how the combined entity delivers on pre-deal objectives are what really matter. Post-acquisition business issues cited by survey respondents are shown in Figure 3.

There are a variety of possible options for measuring success. The most frequently cited — the extent of revenue and commercial synergies (62%) — reflects the focus on top-line growth as a driver for acquisitions. Other popular measures of success included return on capital (55%), financial synergies (48%), customer satisfaction (40%) and payback period (39%).

Employee attitude and commitment proved the biggest disconnect between acknowledged post-deal challenges and measures used to evaluate success. Only 12% of participants said they had used employee engagement as a measure of success despite frequently cited issues with hiring and retaining employees, and overcoming cultural and organizational differences. This raises the question of whether companies have the necessary tools to make a full evaluation. 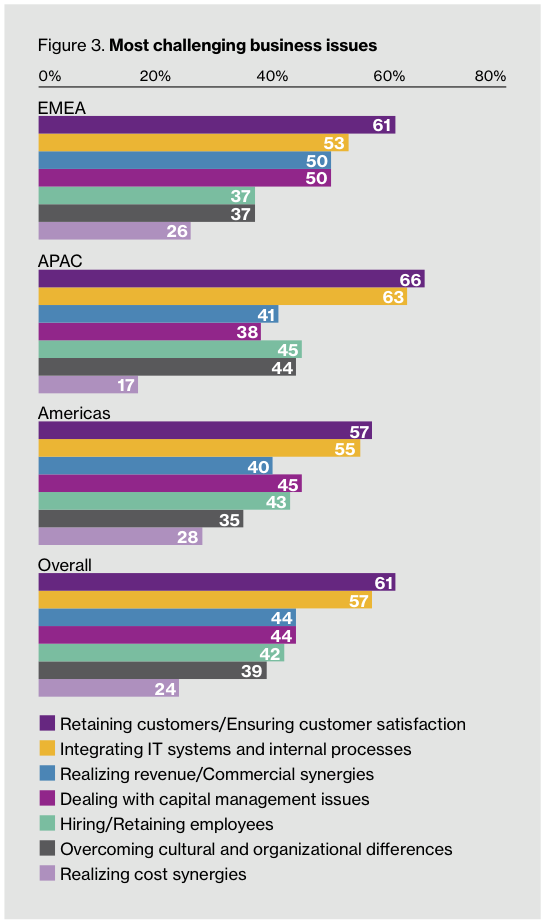 2015 was an exceptional year for M&A activity in the global insurance industry, and very little in our latest report suggests a significant near-term change other than the caveat about the number of remaining large-sector targets following the recent glut of such deals.

Our reasoning: 82% of the companies surveyed said they plan to acquire in next three years, and over 90% in emerging markets; only a third of all companies plan to divest. And over 40% of serial acquirers — those that have completed three or more deals over the past two years — plan at least three deals in the next three years. At the same time, the appetite of nonindustry investors for insurance assets continues.

The attributes insurers say they are looking for in target companies suggest that the desire to secure top-line growth is likely to continue to dominate. Almost two-thirds of insurers say they are most often focused on companies that offer them an opportunity for market positioning or an increased customer base. Growth rates (34%) and distribution platforms (32%) are also important to many insurers.

Prevailing market dynamics should remain helpful, such as the availability of relatively cheap capital, the consolidation strategies of some large insurers in mature markets and the financial rigors placed on some smaller companies by regulation, including Solvency II in Europe and similar regimes now rapidly being introduced in other markets.

It is also clear that insurers are becoming more demanding in their deal criteria. Typically, firms reported increased expectations for return on capital.

Together, these factors will force investors to think harder about where and how they focus their M&A efforts. A considerable surfeit of companies responded that they are planning to acquire in the next three years, compared to those that expect to divest.

Stiffer competition will challenge companies to acquire needed assets at the right price.