How M&A Practitioners Enable Their Success 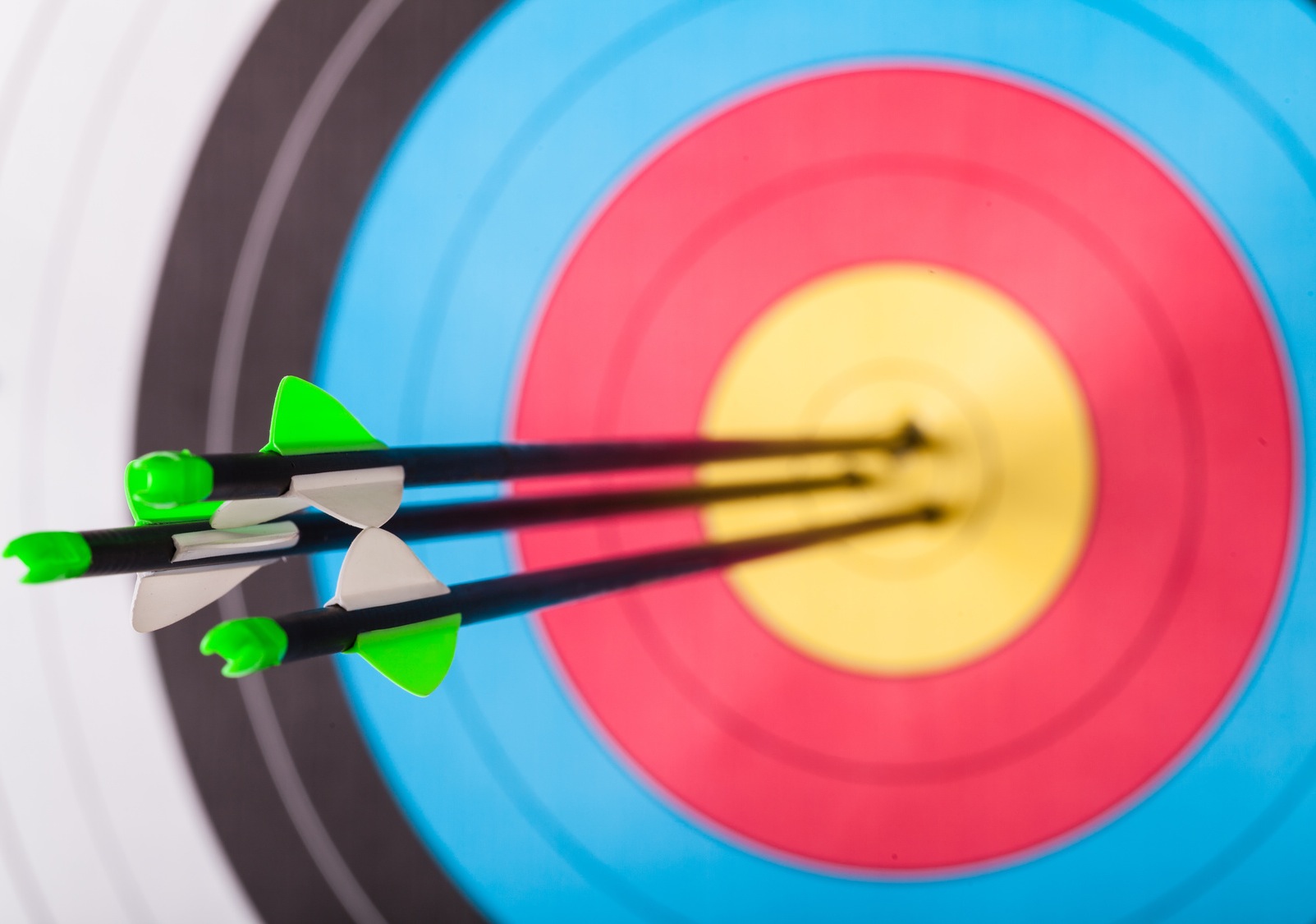 Companies that are best at transactions approach M&A differently — but there’s room for improvement across the board.

In the latest McKinsey Global Survey on M&A practices and capabilities, most respondents report that their companies regularly examine the portfolio for new opportunities — and many do so at least once a year. But if the blistering M&A pace of the past several years continues, as most respondents expect, then these responses also suggest that an annual review of portfolios may not be enough.

As of this writing, the value of M&A in 2015 is on track to rival last year’s, when deal-value announcements totaled about $3.4 trillion — levels not seen since 2008. That level of activity raises the stakes for companies reexamining their own business portfolios, as the shifting competitive landscape creates new opportunities — and threats. It may also explain why respondents who perceive their companies to be more successful at M&A are also significantly more likely to report looking for opportunities more often. Whether companies are successful because they look for opportunities more often or the other way around, we can’t say. But the correlation, combined with the fast pace of M&A activity in general, does suggest that more frequent portfolio reviews may be better.

These are among the findings of our newest M&A survey, which asked executives about underlying trends, what M&A capabilities their companies do (and don’t) have, and the effectiveness of their companies’ M&A programs relative to competitors. When we looked at what makes a company good at M&A, the results indicate that while it’s important to perform well at every step of the M&A process, the “high performers” differentiate themselves from others by evaluating their portfolios more often, moving faster through their due-diligence and execution processes, and building stronger capabilities for integration. According to the results, though, even the highest-performing companies could benefit from giving their M&A teams more effective incentives and from proactively connecting and building relationships with their potential targets.

Will the pace of M&A continue?

Among respondents whose companies considered acquisition targets in the past year, just over two-thirds report completing at least one deal. Of those that tried but failed to complete an acquisition, 52 percent indicate that their companies engaged with at least one potential target but, ultimately, did not close the deal.

Most executives expect the next year to bring as many or more deals as the past one. It’s too soon to tell whether market volatility in the late summer will affect M&A over the longer term, but at least as of May 2015, two-thirds of respondents expect the pace of activity over the subsequent 12 months to continue or increase—and nearly three-quarters expect these deals will be the same size or larger. Interestingly, those who anticipate a larger number of deals also expect their value to increase—and those who expect to do fewer deals expect their value to decline. Looking further ahead, respondents expect little change to their companies’ rationales for deals in the next five years, and the most frequently cited reasons all relate to growth: expanding offerings, entering new geographies, and acquiring new assets.

More specifically, respondents from high-tech and telecom companies are significantly more likely than those in every other industry to expect an increasing number of deals, though they were not more likely to expect larger ones. Consumer-company executives tend to expect fewer deals in the next year than their B2B peers.

What high performers do differently

To better understand companies’ M&A performance overall and where the best-performing companies differentiate themselves most from their peers, we identified a group of high performers. Respondents in this group characterize their companies’ performance as having met or surpassed targets for both cost and revenue synergies in their transactions of the past five years. The low performers, by contrast, are respondents who report that their companies have achieved neither the cost-nor the revenue-synergy targets in their transactions.

The survey results indicate a few areas where the high performers do things differently than others. For example, these respondents are much more likely than the low performers to report that their companies evaluate their portfolios for acquisition, joint-venture, and divestiture opportunities multiple times per year, as opposed to once every one or two years. The inverse is also true: low performers are significantly more likely to say their companies look for opportunities once a year or less (Exhibit 1). Notably, the frequency with which companies (both high and low performers) evaluate their portfolios for divestiture opportunities is significantly less than it is for acquisitions or joint ventures.

On average, high- and low-performing companies tend to move through their due-diligence and deal-execution processes at about the same speed—up to a point. However, among companies where respondents report taking six months or more, the pattern diverges. More than one-quarter of low-performer executives say their companies take longer than six months to move from a nondisclosure agreement to a binding offer, nearly double the share of high performers that say they spend the same amount of time (Exhibit 2).

Finally, the high performers stand apart on the strength of their integration processes. We asked executives about their companies’ capabilities across the four areas of M&A, and those from the high-performing companies report proficiency more often in all four than their peers at low-performing companies do. But their skills are most differentiated in integration (Exhibit 3). Interestingly, the two integration capabilities with the largest percentage-point differences between high and low performers are also the two capabilities where, overall, respondents report the least proficiency: effectively managing cultural differences across organizations and setting synergy targets.

Exhibit 1. Companies that outperform their peers are more likely to evaluate strategic options more than once a year. 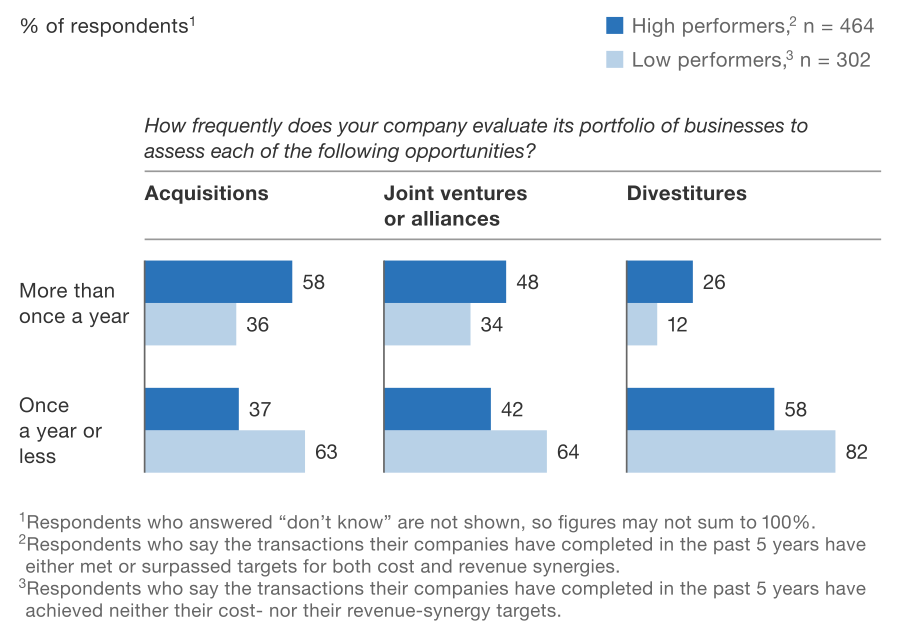 Exhibit 2. According to respondents, the high performers move faster than low performers through deal execution. 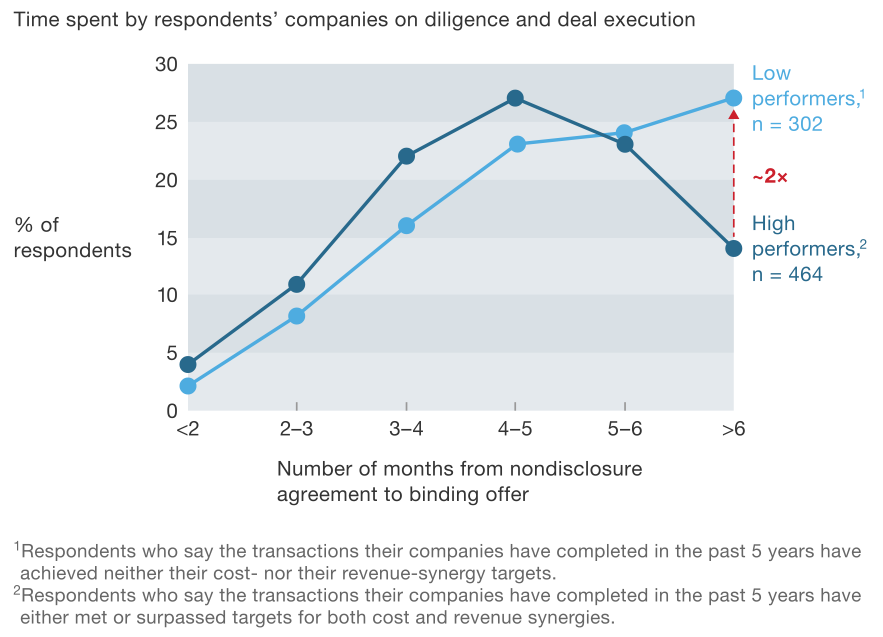 Exhibit 3. High-performing M&A companies are most differentiated from low performers in their integration capabilities. 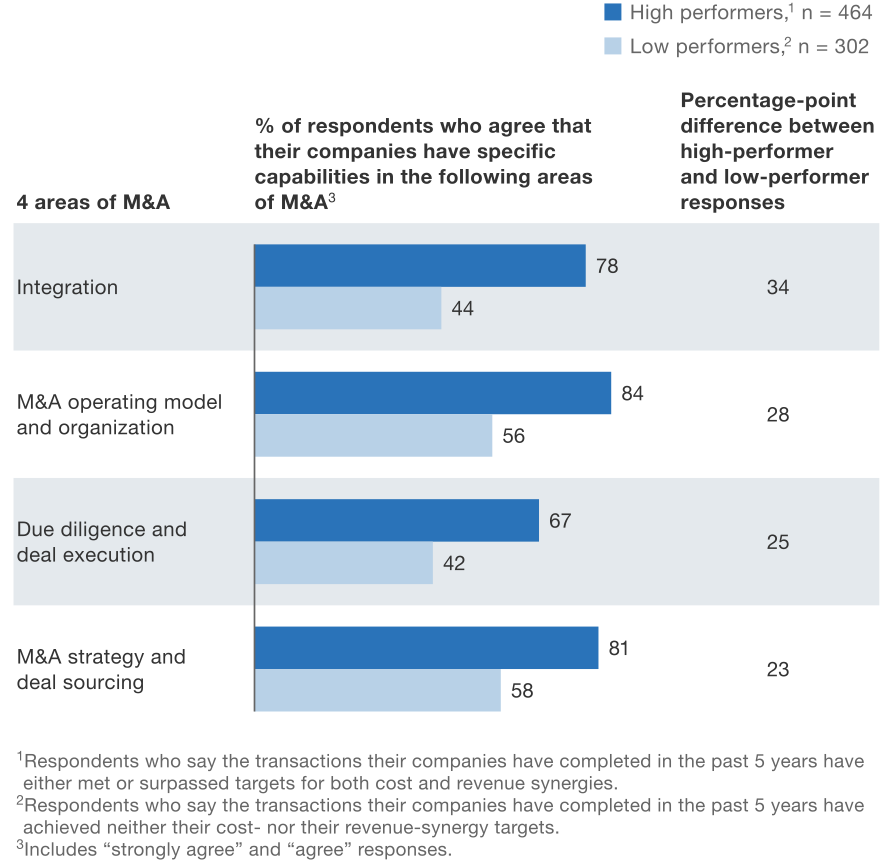 What all companies could do better

For all their best practices and the strength of their capabilities, even the high performers have room to improve. When it comes to incentives, the results suggest that many companies focus on earn-outs and retention packages for key talent in acquired companies — but often overlook their own M&A teams. Because there are often different owners throughout a company’s M&A process, it can be particularly tricky to put proper incentives in place for each one. So, incentives must balance the promotion of post-integration success with the successful execution of an individual’s role.

Although the high performers have particularly strong internal processes to identify potential targets, they—and their lower-performing peers—are least effective at connecting and building relationships with these targets (Exhibit 4). For example, not even half of respondents at the high-performing companies (and just under one-third at the low performers) say their companies regularly conduct “road shows” or meetings to establish relationships with the most attractive companies. Executives at both the high- and the low-performing companies report similar results for using compelling pitch materials to support even very-early-stage outreach discussions with targets.

Exhibit 4. When it comes to sourcing M&A targets proactively, companies get many internal tasks right but then fall behind on the external outreach. 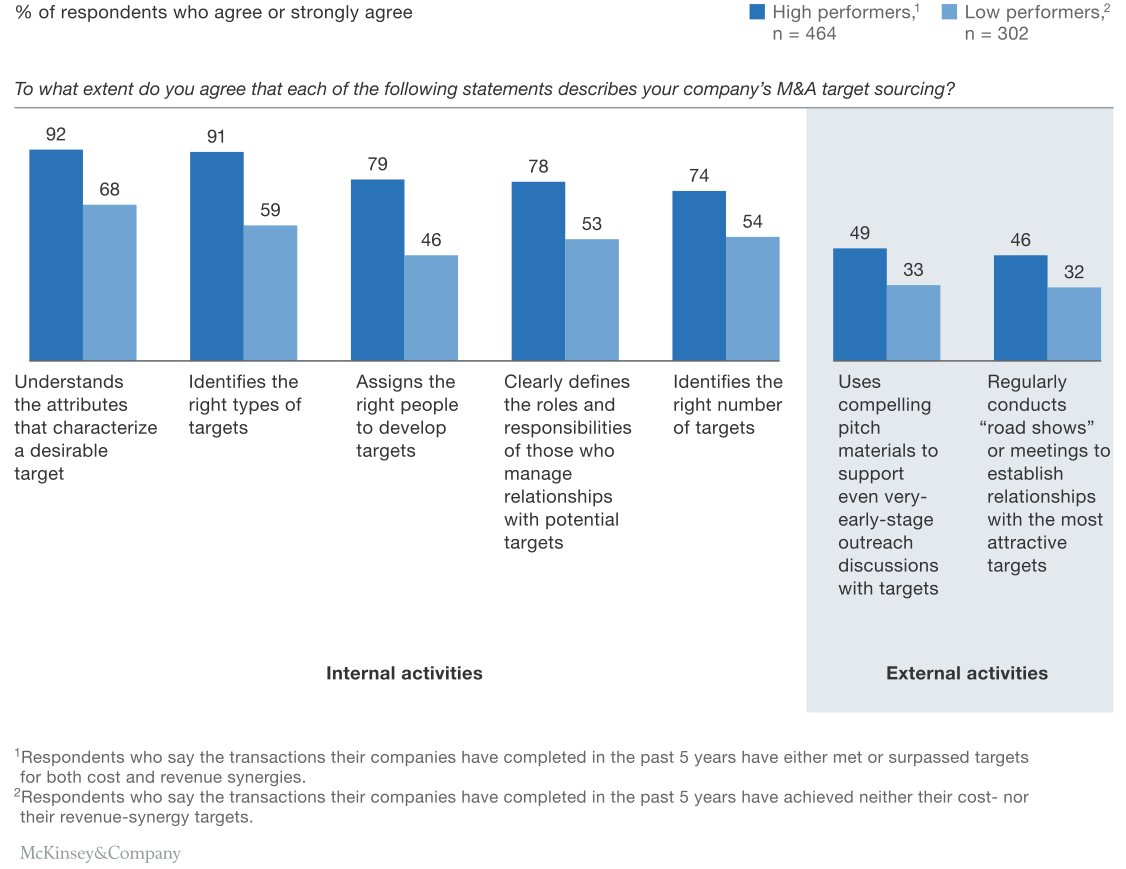