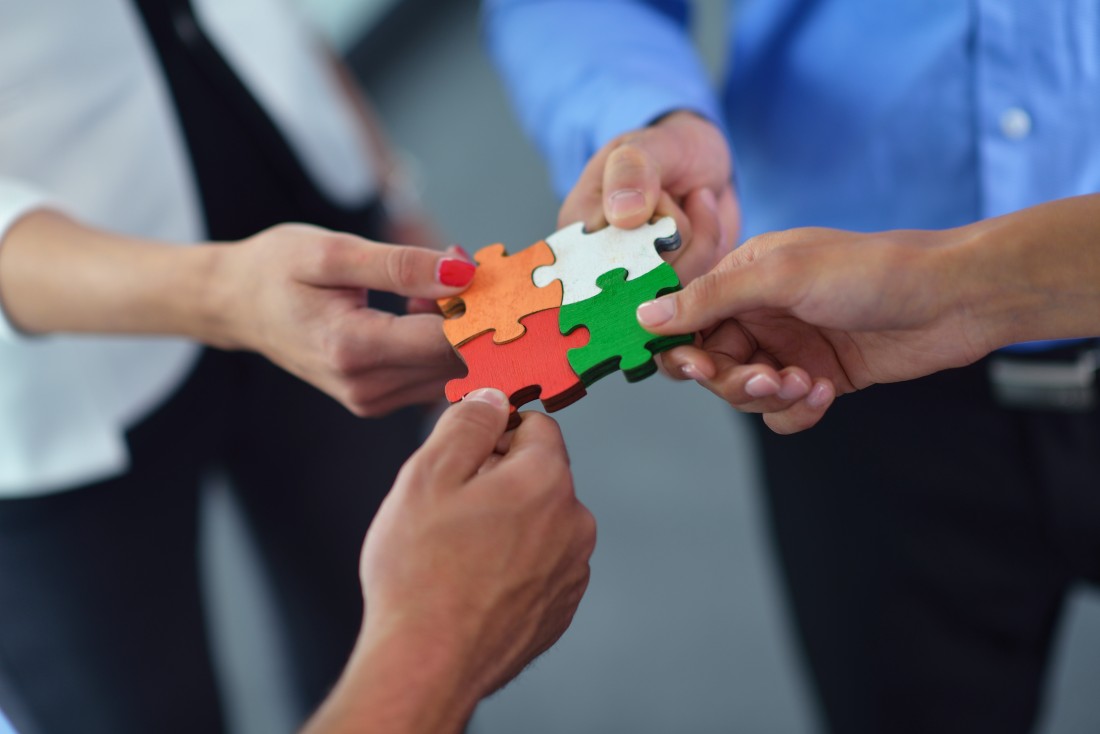 Investors are optimistic about the value of big deals behind a growing wave of M&A. What key trends do they need to understand?

After years of stagnant activity, mergers and acquisitions surged in 2014, with the announcement of more than 7,500 deals with a combined value exceeding $3.5 trillion. That’s an increase of more than 7 percent by number and more than 25 percent by value compared with 2013. While that volume hasn’t yet reached the high of nearly 10,000 deals set in 2007, a new wave of activity is clearly under way.

More than a third of the total value of deals announced in 2014 came from large deals – with more than 90 percent of that coming from large deals by corporate acquirers, especially in the healthcare and technology, media, and telecommunications sectors. That’s something of a surprise, both because previous research found that large-deal M&A strategies are riskier to execute and create less value than programmatic M&A and because, for the first time in our reckoning, investors seemed to approve. In fact, since 1998, the average announcement effects have never shown investors to be as optimistic about large deals as they have been in the past few years (Exhibit 1).

The average deal value added (DVA) for large deals increased from 6 percent in 2012 to about 12 percent in 2014. Acquiring-company shareholders in particular have benefited, as announcement effects for acquiring companies turned positive for the first time since 1998, resulting in an average DVA of 0.9 percent for large deals in both 2013 and 2014. The share of large deals with a positive announcement effect for acquirers has also grown since 2012, from 36 percent to nearly 50 percent in 2014. Not surprisingly, investor confidence in large deals varies from sector to sector – but it seems not to be connected to the industry’s track record of creating value through large deals (Exhibit 2).

Why all the interest in big deals? We do not yet see conclusive evidence that companies, on average, have gotten better at them. Some may have new or improved rationales for such deals, but they’ll have to do a better job integrating than companies have in the past to capture the value they expect. And tax inversions are not playing more than a modest role in big deals. Of the nine large tax-inversion deals announced, three were either withdrawn or rejected. The remaining six – of which four are still pending – amounted to 12 percent of total deal value in large deals, and those were predominantly in the healthcare sector. Other factors, instead, may be attracting investor support for big deals:

• In some sectors, it could be that performance differences among companies hold the promise of significant economies of scale through M&A (Exhibit 3). As differences in earnings grow, deals will look more affordable – though the specific logic of any given deal must be considered on a case-by-case basis.

• For many companies, it could mean that investors are, on average, just relieved to see them doing something with their sizable reserves. Excess cash among the top 1,000 US companies approached $1.5 trillion by the end of 2013, creating real pressure to put money to work. Among the top 1,000 listed companies in the United States, about half of that cash appears to reside in the healthcare and technology, media, and telecommunications sectors – the sectors announcing most of the large deals in 2014. (Increased activity in healthcare occurred almost exclusively in pharmaceuticals and healthcare products.) For now, investors seem satisfied with the value-creation thesis of deals relative to returning cash to investors via dividends or share buybacks.

• Activist shareholders may be creating a sense of urgency around managing the corporate portfolio – especially as they increasingly target companies with market capitalizations above $10 billion. Or it could be that companies are pursuing better-quality deals, on average, validating and testing the rationale for their deals prior to announcement.

• The increase in activity overall and portfolio reallocation may be creating value in their own right. McKinsey research has shown that companies with a high rate of capital reallocation over a longer period of time tend to outperform in shareholder returns. Even with the currently high volume of very large deals, the share of divestments in total deal volume remains above average, implying that large portfolio moves are happening as well. We certainly see the potential for value creation from such deal strategies, but only if companies have real capabilities to successfully manage large and complex integration or divestiture programs. 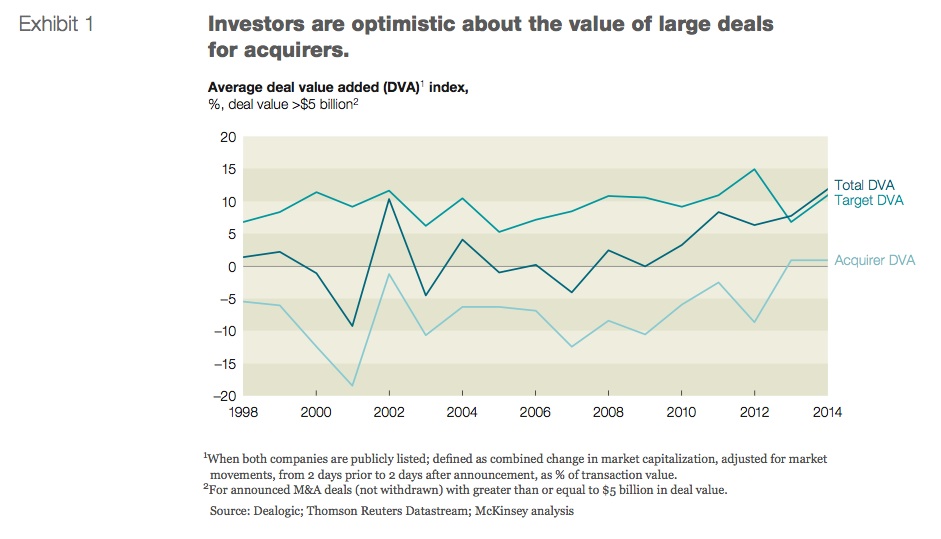 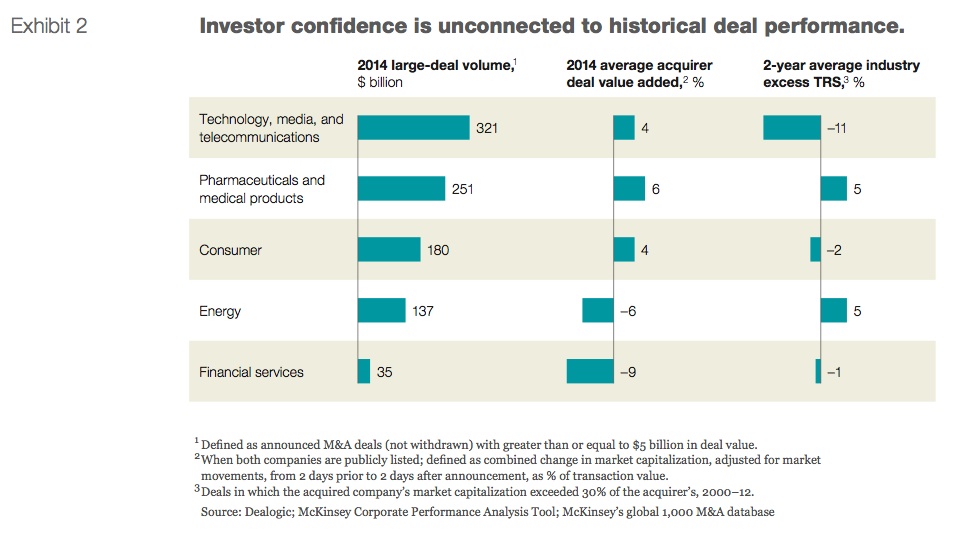 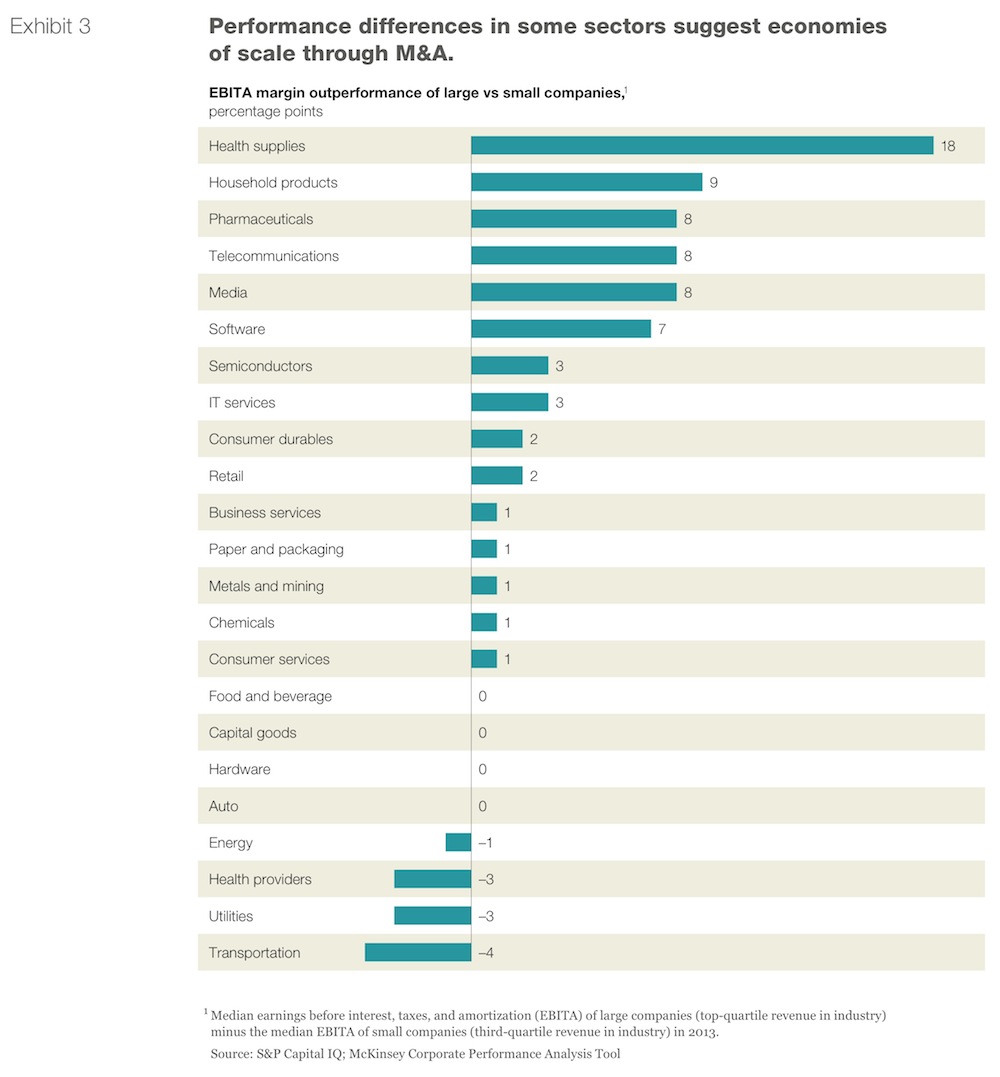 Like previous M&A waves, it is the reemergence of large deals that drives the increase in deal activity. Announcement effects across the board have improved, and negative reactions to deals have become less severe – though investors in some sectors remain wary.