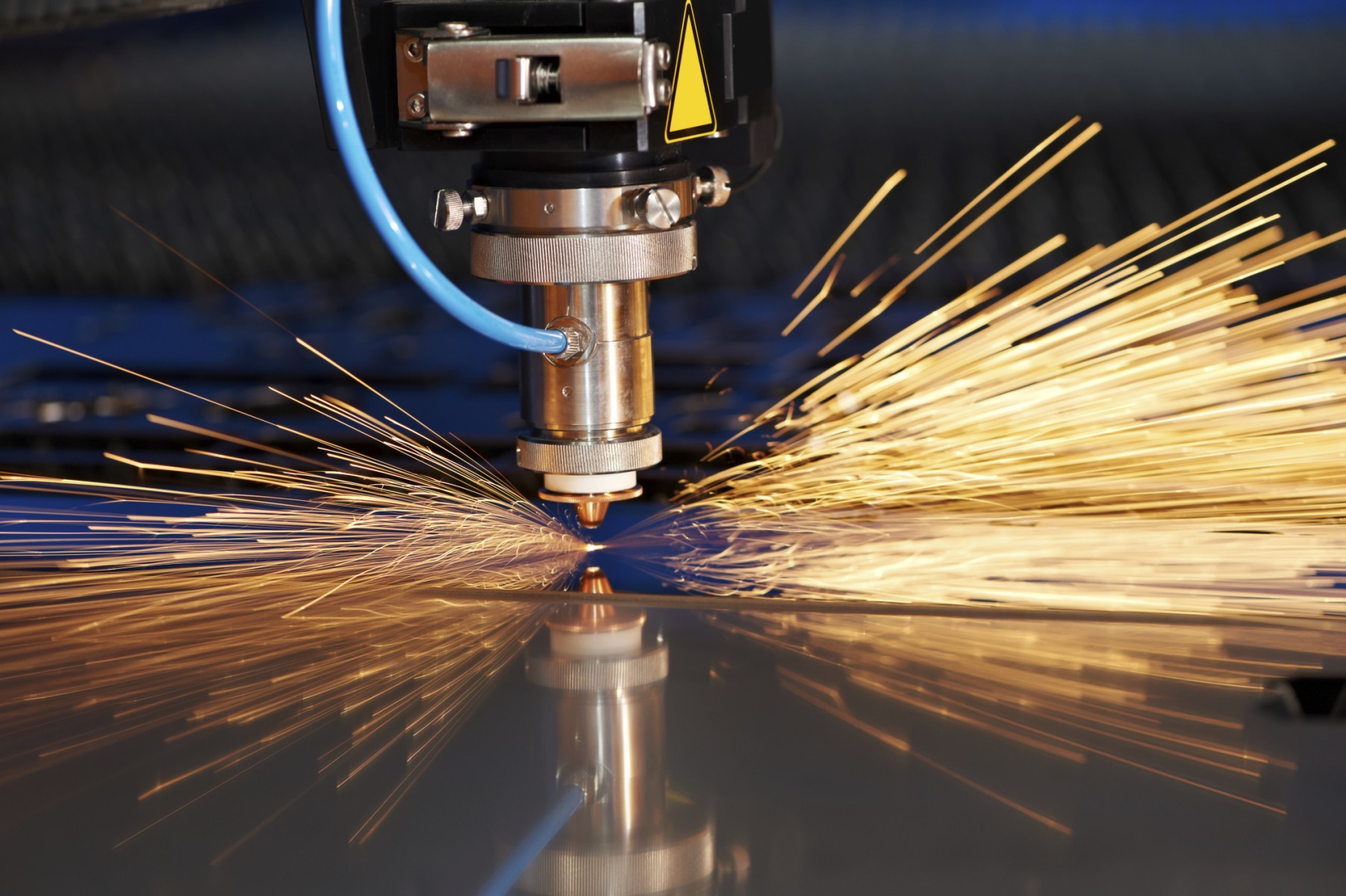 The following is an analysis of Global Industrial Manufacturing deals with disclosed value greater than $50 million.

The largest deal announced in Q3 2016 was the deal between Emerson and Pentair PLC-Valves & Controls Business ($3.2 billion).

The improvement in deal activity in Q3 2016 may be a sign that deal makers’ economic and geopolitical concerns, both in the US and globally, have begun to subside. We are cautiously optimistic that Q4 2016 and fiscal 2017 will continue to be a good environment for deal makers.

“Global industrial manufacturing deal activity significantly outpaced that of most other sectors in Q3 2016. This may suggest deal makers’ economic and geopolitical concerns in certain sectors have begun to subside.” — Paul Elie, US Industrial Manufacturing Deals Leader 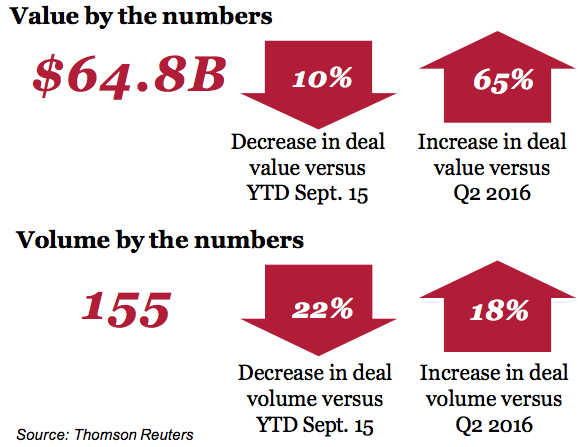 • For Q3 2016 Industrial Machinery and Fabricated Metal Products sub-sectors continue to account for the bulk of total deal value with $6.8 billion and $4.4 billion of deal value, respectively.

• Deal activity in Q3 2016 was dominated by strategic investors, as they drove 83% and 79% of transactions in both deal value and volume, respectively. 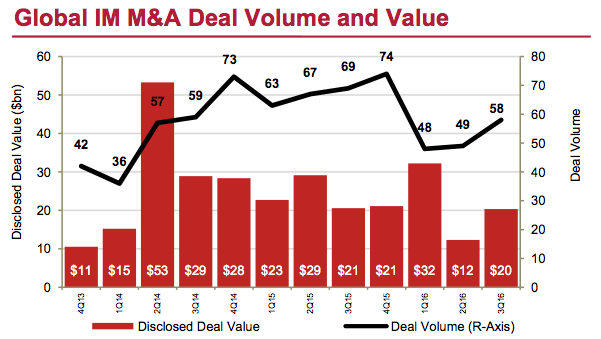 There were no megadeals in Q3 2016. For the first nine months of 2016 there was one megadeal for $22.7 billion between Johnson Controls Inc. (JCI) and Tyco International (TYCO). Compared to the same nine months of 2015, megadeal value has increased 20% (two megadeals with aggregate disclosed value of $18.9 billion).

In August, Emerson Electric (US factory automation equipment producer) entered into an agreement to acquire the valves and controls unit of Pentair PLC-Valves (Swiss pump manufacturer) for $3.15 billion. The transaction is a part of Emerson’s strategy to expand its automation offering. 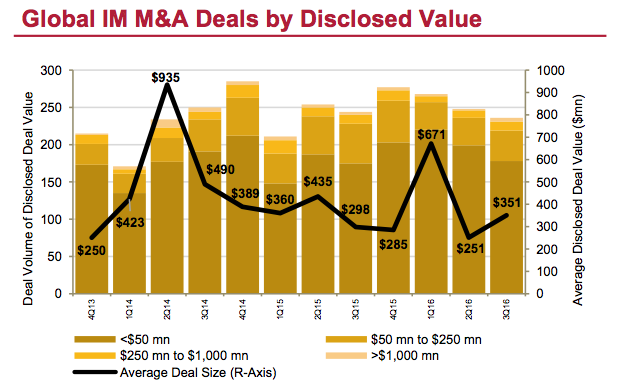 Industrial Machinery, the largest category by deal volume and value, saw a slight decline in deal value from Q2 2016 ($6.8 billion vs. $7.5 billion), while all other major sub-sector categories saw deal value at levels not seen since Q4 2015. Fabricated Metal Products grew three times to $4.4 billion from Q2 2016 ($1.0 billion), which was primarily driven by the large deal between Emerson Electric and Pentair. Electronic & Electrical Equipment deal value for Q3 2016 was $5.9 billion, up from $2.1 billion in Q2 2016.

Local deals (transactions by targets and acquirers within the same borders) continue to account for the majority of M&A transactions, contributing to 65% of total deal value and 79% of total deal volume this quarter. Still, there appears to be growing interest in cross-border deals, as seen by the Emerson-Pentair deal which accounted for 15% of total deal value this quarter. Meanwhile, the majority of cross-border and local deals continue to be taking place in the Asia & Oceania region. 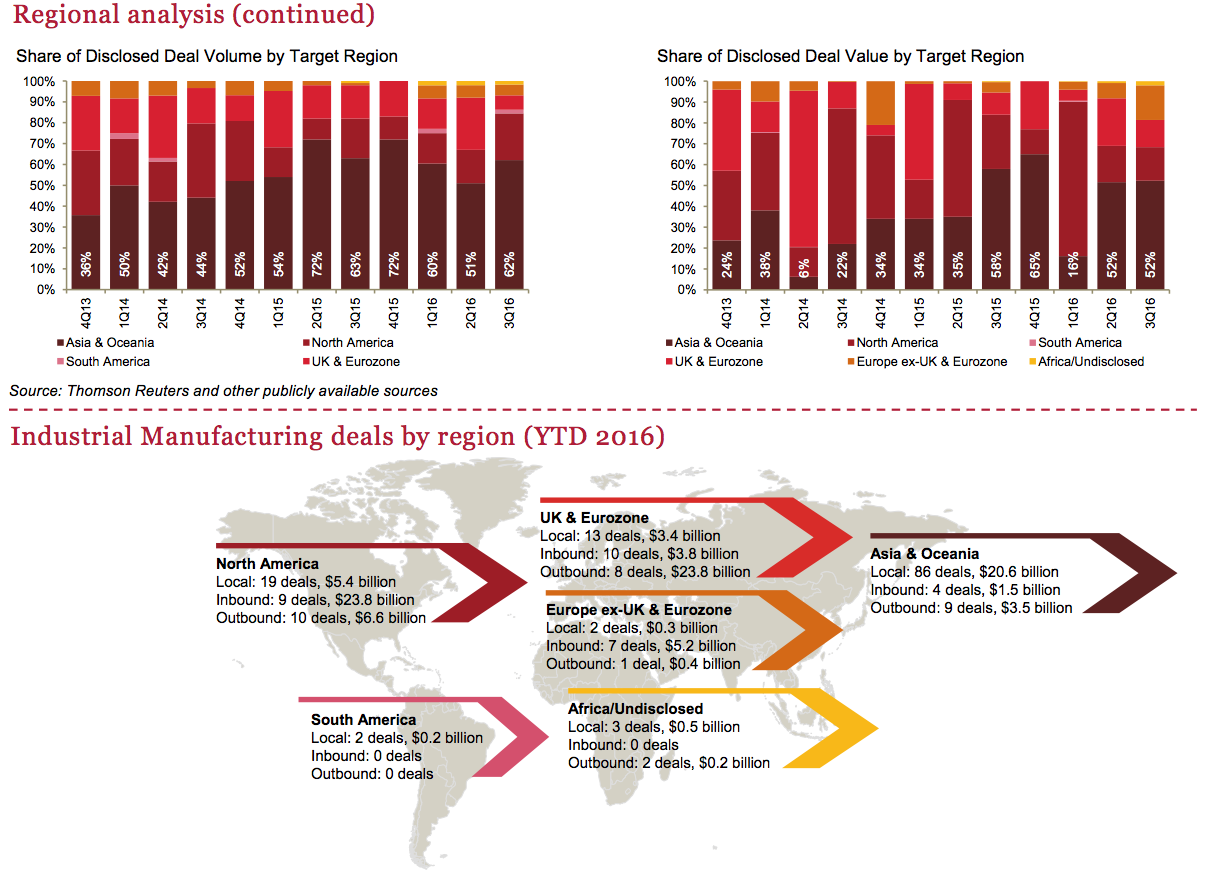 Our outlook for the remainder of 2016

Industrial Manufacturing has seen declines in deal value and volume for the first nine months of 2016. However, that trend changed in 3Q 2016. According to PwC’s 2016 CEO Survey, 28% of CEOs in the US and globally have a desire to complete a deal.

Although the economic impact of geopolitical uncertainty in the US and globally will likely continue to be on the minds of many deals makers for the remainder of 2016, the improved deal activity in the current quarter may be a sign deal makers, in certain sectors, are more optimistic about the future.

These are the key trends that we predict will be present in the Industrial Manufacturing M&A environment in the remainder of 2016 and into 2017:

• Deal maker cautiousness will subside as outcome to geopolitical events and their potential impact on deal making becomes clearer.

• Comparatively stronger US economy may lead to increased foreign investment and inbound deals to the North American region. 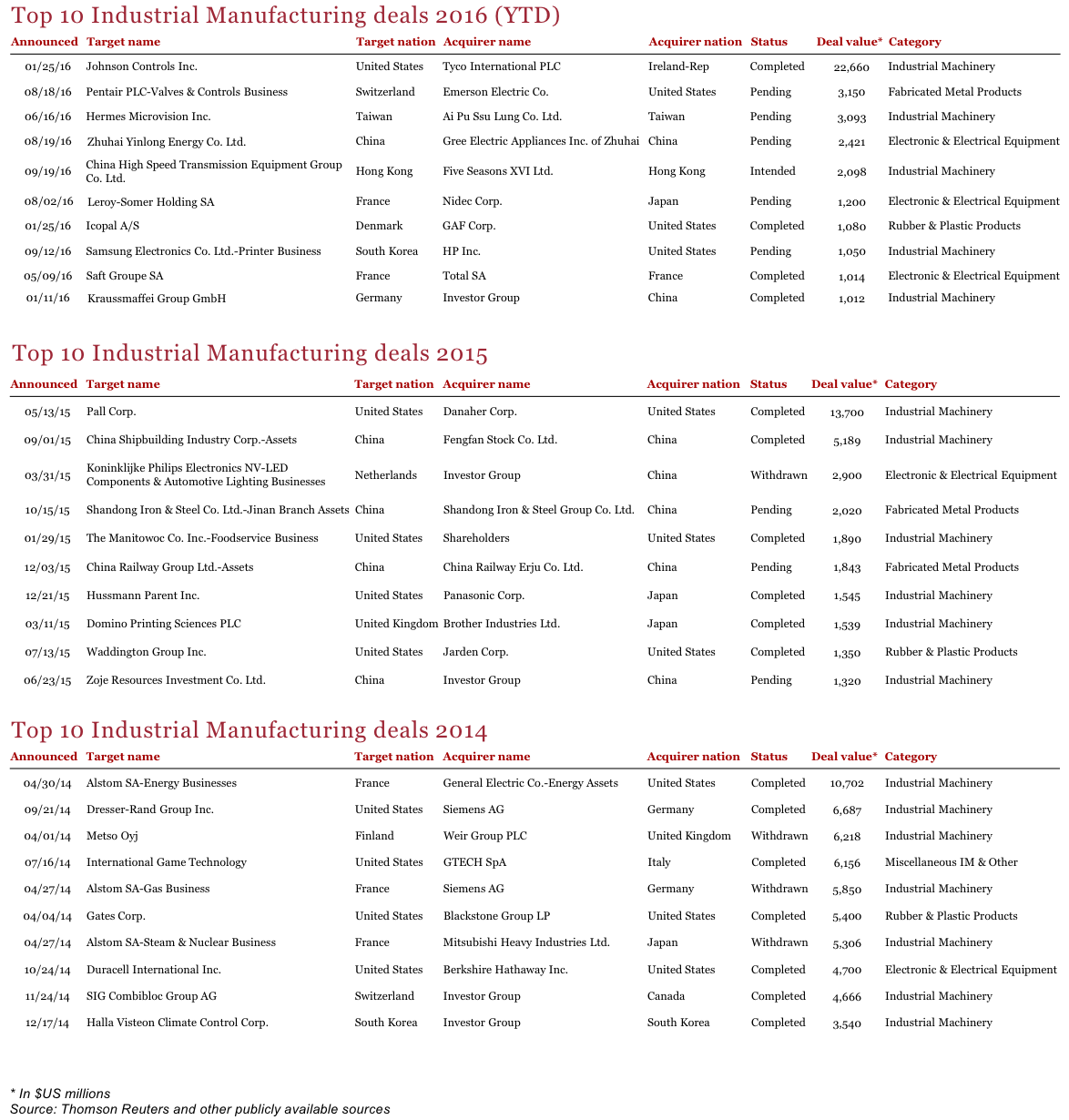