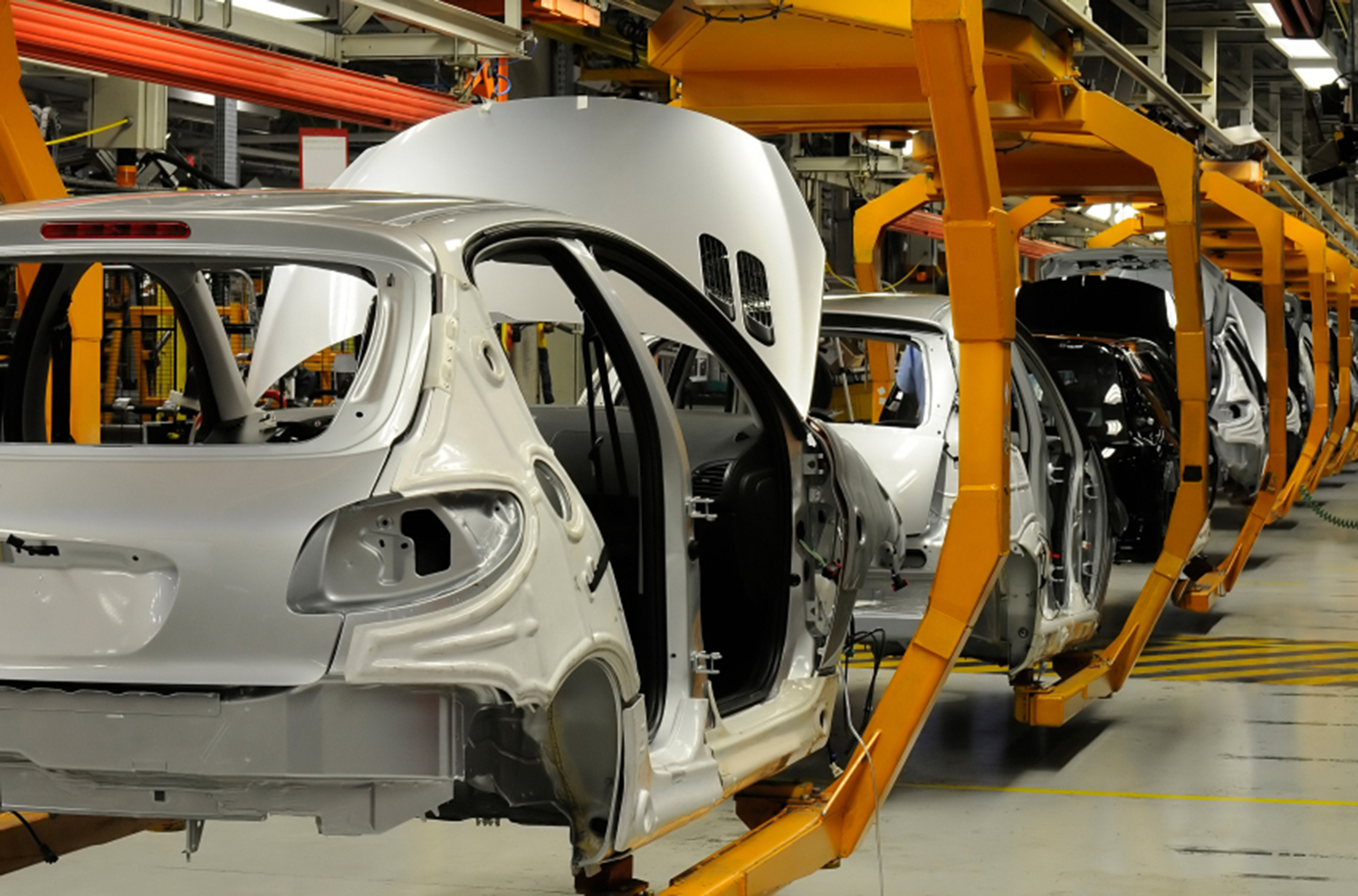 Today’s companies still face barriers on the road to long-term growth; however, we believe the automotive sector is on an upward trajectory, revving up now to drive future growth. PwC’s Autofacts expects the industry to add 25 million units of production between 2013 and 2020, for a compounded annual growth rate of 3.9%.

Automotive, along with the world at large, is changing at a fast pace. Never before has evolution occurred in such short periods of time. We see five emerging megatrends combining their collective pervasiveness to impact and influence the future of M&A activity-discussed in the following pages, and each of which, along with its corresponding considerations, has the potential to drive M&A activity for global sector participants—ranging from raw material procurement to final assembly.

To stay ahead of the pace of change and remain relevant in today’s ultra-competitive marketplace, companies must collaborate across the automotive network to anticipate any roadblocks on the horizon and plan in advance how best to topple them. In all likelihood, the strategies emerging from these collaborative planning sessions will involve M&A transactions. PwC has identified five Megatrends we believe will impact the future of the automotive industry over the next decade.

Recent surges in population are expected to slow, except Africa where growth remains prolific. Median age by region continues to rise allowing for more drivers. Income equality has grown in over 75% of Organization for Economic Co-operation and Development (OECD) countries, including many emerging markets.

On all fronts, young workers will change the organizational structure and labor practices of many employers, requiring more flexibility and incentives to attract and retain “millennials” to the industry and the epicenters in which the industry operates. 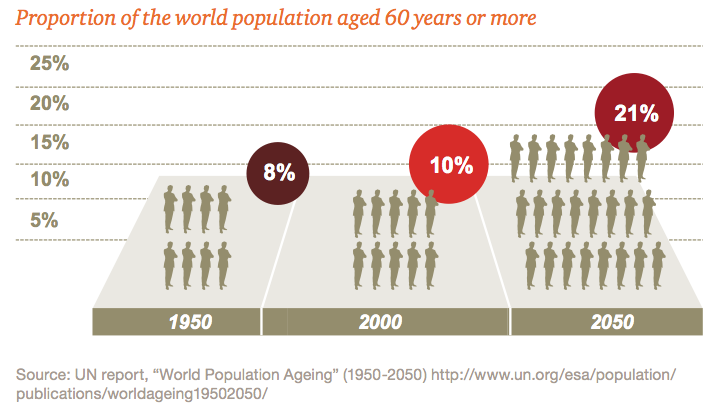 Western economic dominance is a relatively recent phenomenon, and we are now seeing a rebalancing of global economies. This realignment is triggering the transition of growth countries from centers of production to consumption-oriented economies.

Vehicle demand is shifting to ascending economies – a trend the industry is already addressing with an increased focus on emerging markets as mature territories concurrently near a saturation point. 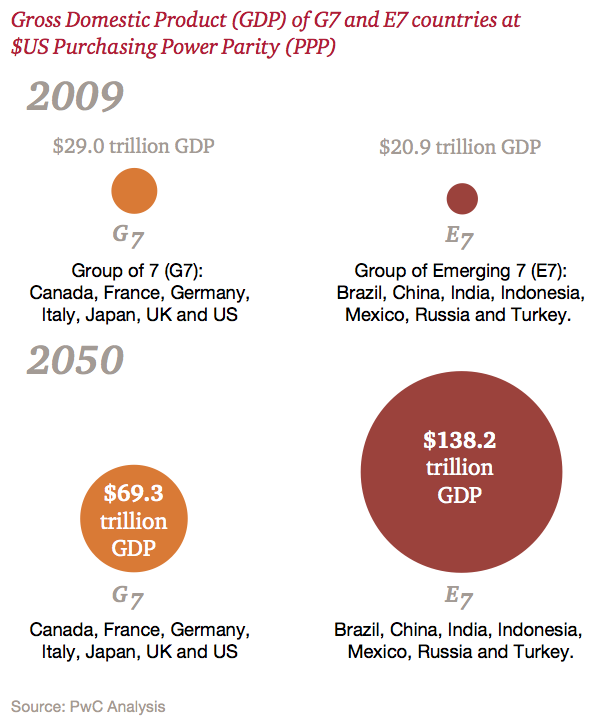 Currently, 50% of the world’s population lives in cities; by 2030, the UN projects that 4.9 billion people will be urban dwellers. By 2015, the United Nations (UN) estimates that there will be 22 mega-cities (populations over 10 million), with 17 located in developing economies. Infrastructure will be strained, where new cities will rise rapidly and require investments to accommodate growth.

Technology and innovation will be of utmost importance as private and public transportation models adjust to new mobility needs. Connectivity, including vehicle to vehicle and traffic management systems, will require significant infrastructure investments to facilitate new transportation networks. Demand for energy is forecasted to increase by as much as 50% by 2030, and water withdrawals by 40%. The impact of this could make traditional methods of manufacturing and commerce difficult or even impossible in some places. Sustainable solutions will become at odds with the need for resources to drive growth.

Climate change and resource scarcity will drive Original Equipment Manufacturers (OEMs) and suppliers to rethink regional manufacturing and distribution strategies. Countries and regions will differ in related regulations, requiring adaptability in both technology and manufacturing models. 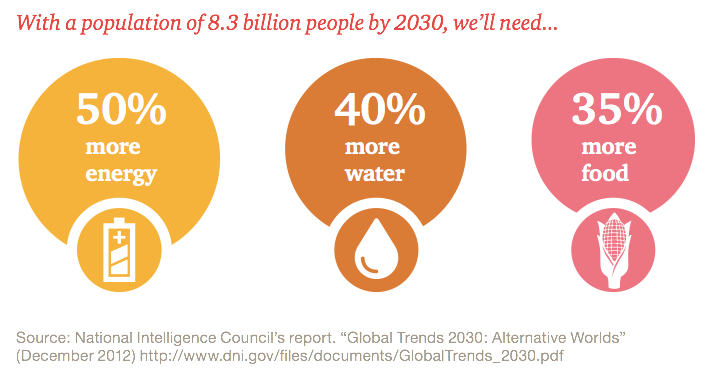 Entirely new industries are being created, which could have a significant impact on the size and shape of the manufacturing and high- tech sectors. The internet, mobile devices, “big data,” cloud computing and other breakthroughs will continue to change our world, and companies are grappling with how these factors will affect the consumer experience – and the business models supporting them. 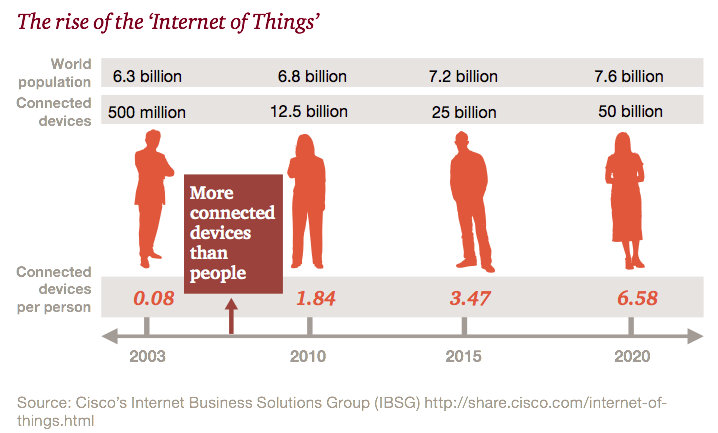 The year in review

For the second straight year, 2013 saw automotive deal activity continue to decline—albeit at a far slower pace than in the previous year. At 465 transactions, 2013 deal volume was down by just 5% compared to the significant drop of 18% experienced in 2012 when volume fell from the 594 deals transacted in 2011 to 490. In 2013, the total aggregate disclosed value in the sector was approximately $22 billion— a decline of 28% from the 2012 disclosed value of approximately $30 billion. 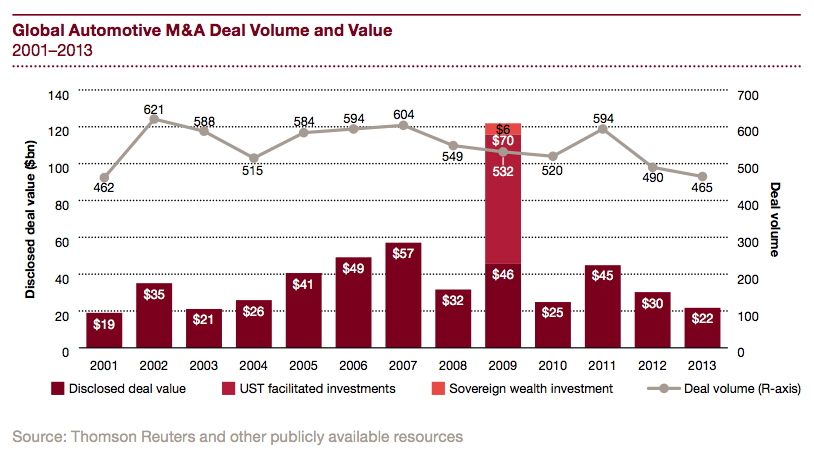 Historically, M&A activity has trended directionally consistent with automotive assembly volume. However, this trend has not continued over the last two years, primarily driven by slowed activity in Europe. While much of the last two years was centered on lingering questions of when Europe would turn itself around, 2014 appears to be the year where most regions will show year-over-year growth in assembly. As such, PwC maintains a positive outlook for a future increase in M&A activity with 2013 showing signs that the struggling European Union market is finally beginning its recovery.

Looking beyond the European Union, North America and the Developing Asia-Pacific regions are expected to continue expanding throughout 2014. Long-term, Autofacts expects the industry to add 25 million units of production between 2013 and 2020 for a compounded annual growth rate (CAGR) of 3.9%. That being said, there are underlying challenges that the industry is set to face, ranging from changing demographics to economic policies—challenges that are likely to drive M&A activity, as companies look for solutions to stay relevant, implement growth strategies and be compliant. 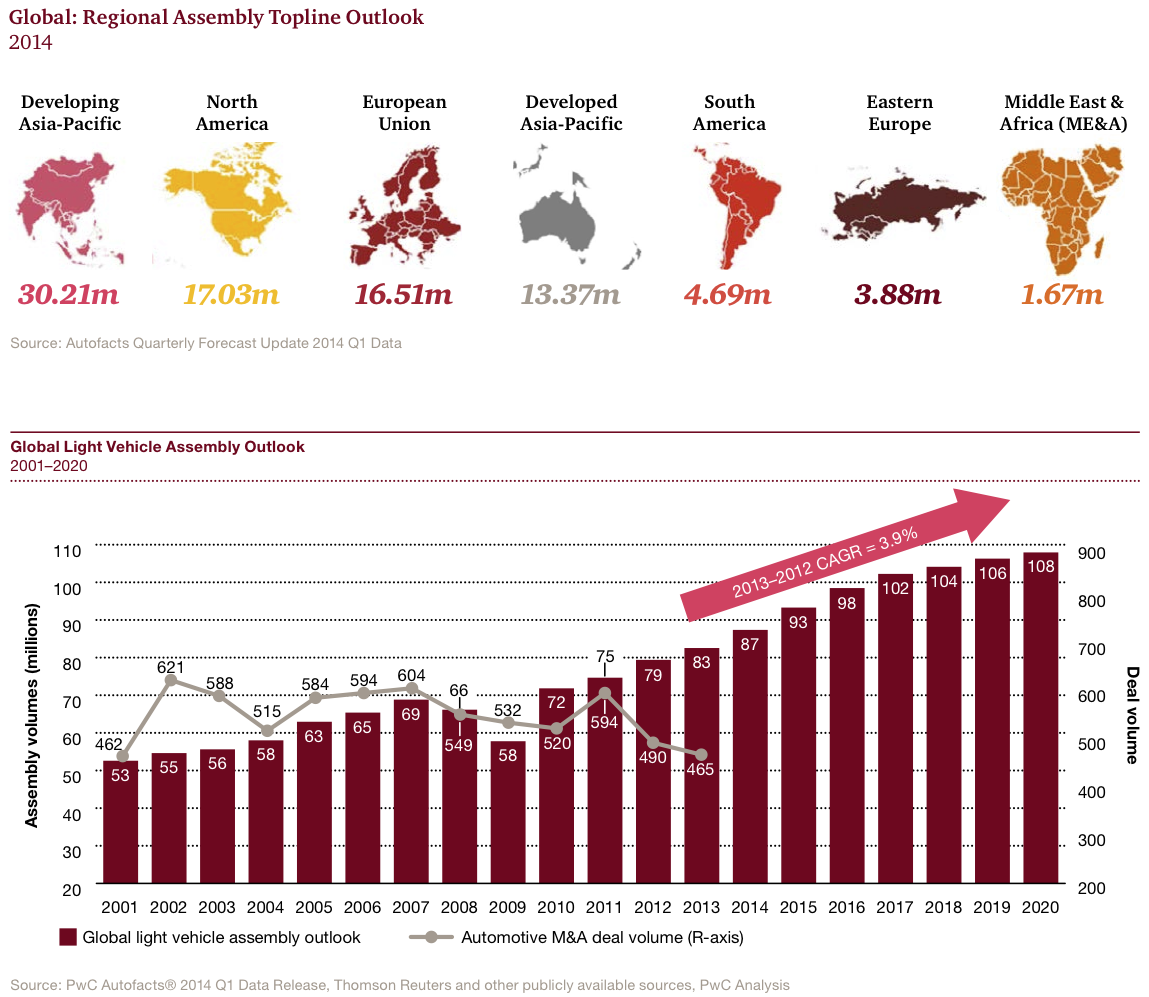 The average disclosed deal size during 2013 was $141 million, representing a 12% decrease over the 2012 average size of $161 million. Given that only four megadeals (>$1 billion) were transacted during 2013—its lowest level experienced over the last six years—small and mid-sized deals continue to dominate the global automotive M&A landscape. The Automotive sector fared better than global cross-sector M&A activity in 2013 which declined by 9% compared to 2012. While this marks the slowest year of deal activity since 2004, deal value stayed relatively flat at $1.94 trillion. After six consecutive years of assembly and sales contraction in the region, Europe finally began to show signs of growth. In our view, this was primarily driven by a stronger-than-expected second half of the year for a number of countries. With year-over-year (YoY) assembly growth of approximately 4.0% in 2013 signaling the start of a slow recovery in the region over the mid- to long-term range, Autofacts predicts that the European markets are beginning to turn around.

Following two back-to-back periods of decline, the European M&A markets have already begun to show signs of recovery, with an increase in its share of deal volume both as an acquiror and target region compared to 2012. Once again, Europe was the most active region in automotive M&A, having transacted 165 local and 22 cross-border deals. Nevertheless, disclosed deal value in the region experienced a significant drop; notably, net investments in Europe were only $511 thousand in 2013 compared to $1.3 million in 2012. Further, the disclosed value of local deals, which has historically been greater than $10 billion, reached only $1.4 billion—which we primarily attribute to megadeals in 2012 and 2011.

Given the abundance of distressed suppliers in the region, the M&A markets have begun to react to favorable valuations, but continued growth will depend on the loosening of the credit markets and an improvement in overall economic environment.

From an assembly and sales perspective, all the North American markets saw strong results in 2013, with light-vehicle sales reaching 15.5 million units and with the US recording increases in sales of over one million units for the fourth straight year. In 2013, for the first time since 2002, North American assembly cleared 16 million units. Autofacts expects continued growth for the region in the short- to long-term range, but this expansion may not necessarily translate into higher levels of M&A activity. After the painful capacity rightsizing that was completed during the economic downturn, companies, on the whole, are operating at consistent and stable levels, thereby reducing the likelihood of increased M&A activity.

Asia transacted the largest volume and value of outbound deals in 2013, with approximately 58% being in European assets. Three of the four megadeals completed in 2013 were transacted locally in Asia, representing part of the 90 local deals with an aggregate deal value of $8.01 billion. Asia’s 25% share of volume—both as a target and acquiror region—was more in-line with historical levels, after having reached historic highs in 2012.

Looking at the region in terms of maturity level, the Developed Asia-Pacific markets of Australia, Japan, and South Korea are all experiencing contraction, with a number of compounding factors leading to a smaller automotive base. With the rise in labor costs and with nearby markets offering more cost-effective assembly solutions, automotive manufacturing is nearly extinct in Australia. South Korea and Japan are both facing aging, declining populations that are simultaneously more urbanized, causing a dip in overall demand within the automotive sector. Given these circumstances, we are less likely to see M&A activity in these mature markets.

Meanwhile, the emerging markets of China, India, and Association of Southeast Asian Nations (ASEAN1) countries continue to rapidly expand, with manufacturers and suppliers alike hoping to increase their footprint in these areas. Joint ventures and new market entries continue to strive for optimal utilization levels while maximizing recently-installed capacity, which is leading to a lower level of M&A activity overall. However, since the developing markets in Asia will remain as long-term centers of growth for the global industry, we expect this plateauing of activity to be short lived. In 2013, deal activity among the categories has shifted away from Vehicle Manufacturers and Components Suppliers towards Others—including retail/dealership, aftermarket, rental/leasing and wholesale, etc. Vehicle Manufacturers and Components Suppliers experienced steep drops in deal volume (28% and 14%, respectively) compared to 2012, while the Others category saw deal volume increase by 23%.

We see the sharp decline in Vehicle Manufacturers as being largely driven by the slow-down in activity within Asia, which historically has been the largest target region within the category. Component Suppliers experienced a volume decline of 14% in 2013 compared to 2012 but, on a positive note, deal value soared to its second highest year, hitting $12.1 billion—a rise driven in large part by the $4.9 billion Carlyle acquisition of DuPont Performance Coatings. 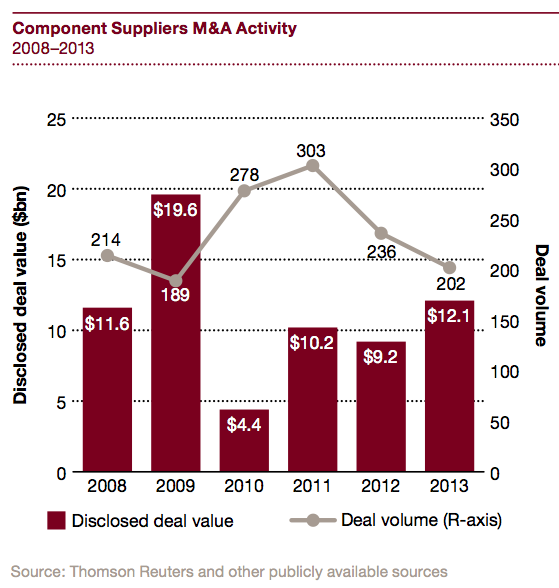 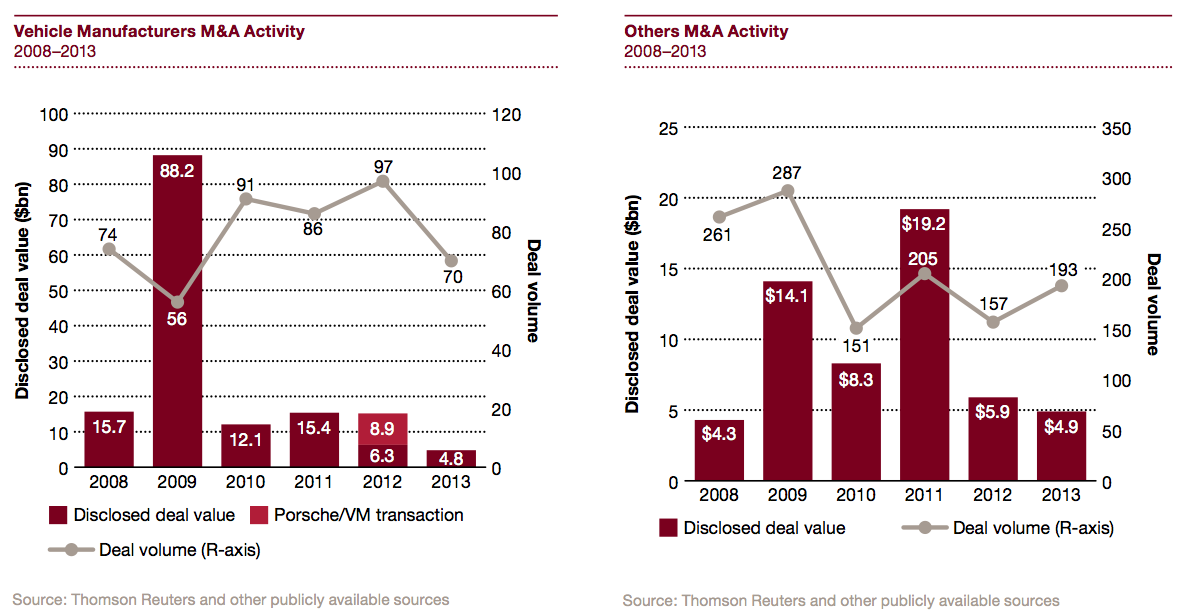 Financial buyers’ activity in 2013 was flat with that seen in 2012, while trade buyers’ deal volume continued to fall from the highs experienced in 2011. Financial buyers’ deal value of $9.2 billion was more in line with 2010 and 2011 levels, representing a 119% increase from 2012. This increase in deal value comes after a sharp decline in value ($9.5 billion) in 2012 compared to 2011. Again, we attribute this primarily to the Carlyle $4.9 billion acquisition.

During 2013, financial buyers continued to focus most of their efforts on the Component Suppliers and Others categories. However, Vehicle Manufacturers did see a slight increase in its share of financial buyers’ deal volume compared to 2012.

In line with the overall trends seen in 2013, financial buyers—on seeing their share of deal volume recover to levels experienced in 2011—refocused their activity on Europe. Contrary to overall trends, financial buyers’ activity within Asia stayed consistent with 2012, but their activity within the US slowed, while trade buyers were more focused on Asia and Europe in 2013, particularly in the Component Suppliers and Others categories. 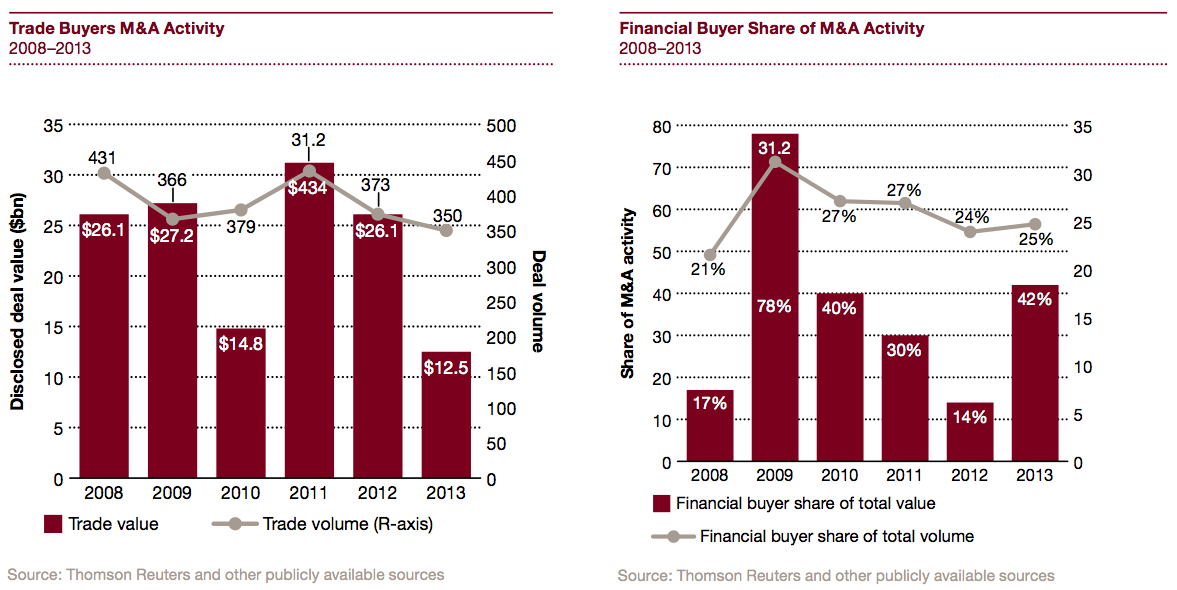 Though the economic and regional challenges of the past several years has led to a lower level of M&A activity, we expect that continued investment in R&D for next-gen technologies and innovation, along with industry fragmentation, will ultimately drive M&A activity in the future.

These are the key factors that we anticipate will spark automotive M&A growth going forward:

• Strategic approach to mitigating the risk of developing megatrends

• Reemergence of Europe from economic collapse