Deals From Hell : M&A Lessons That Rise Above the Ashes 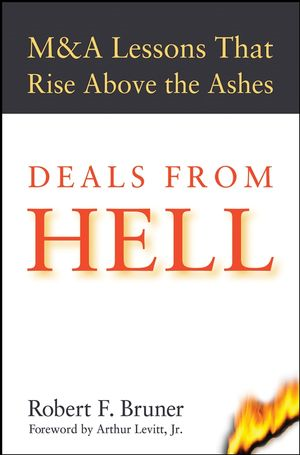 It’s common knowledge that about half of all merger and acquisition (M&A) transactions destroy value for the buyer’s shareholders, and about three-quarters fall short of the expectations prevailing at the time the deal is announced. In Deals from Hell, Robert Bruner, one of the foremost thinkers and educators in this field, uncovers the real reasons for these mishaps by taking a closer look at twelve specific instances of M&A failure. Through these real-world examples, he shows readers what went wrong and why, and converts these examples into cautionary tales for executives who need to know how they can successfully navigate their own M&A deals. These page-turning business narratives in M&A failure provide much-needed guidance in this area of business. By addressing the key factors to M&A success and failure, this comprehensive guide illustrates the best ways to analyze, design, and implement M&A deals. Filled with in-depth insights, expert advice, and valuable lessons gleaned from other M&A transactions, Deals from Hell helps readers avoid the common pitfalls associated with this field and presents them with a clear framework for thinking about how to make any M&A transaction a success.

I. The Foundations of M&A Failure.

2. Where M&A Pays and Where It Strays: A Survey of Research.

5. February 1968: Merger of the Pennsylvania and New York Central Railroads.

7. September 1989: The Acquisition of Columbia Pictures by Sony Corporation.

8. September 1991: The Acquisition of NCR Corporation by AT&T Corporation.

10. December 1994: The Acquisition of Snapple by Quaker Oats.

III. Avoiding the Deal from Hell.