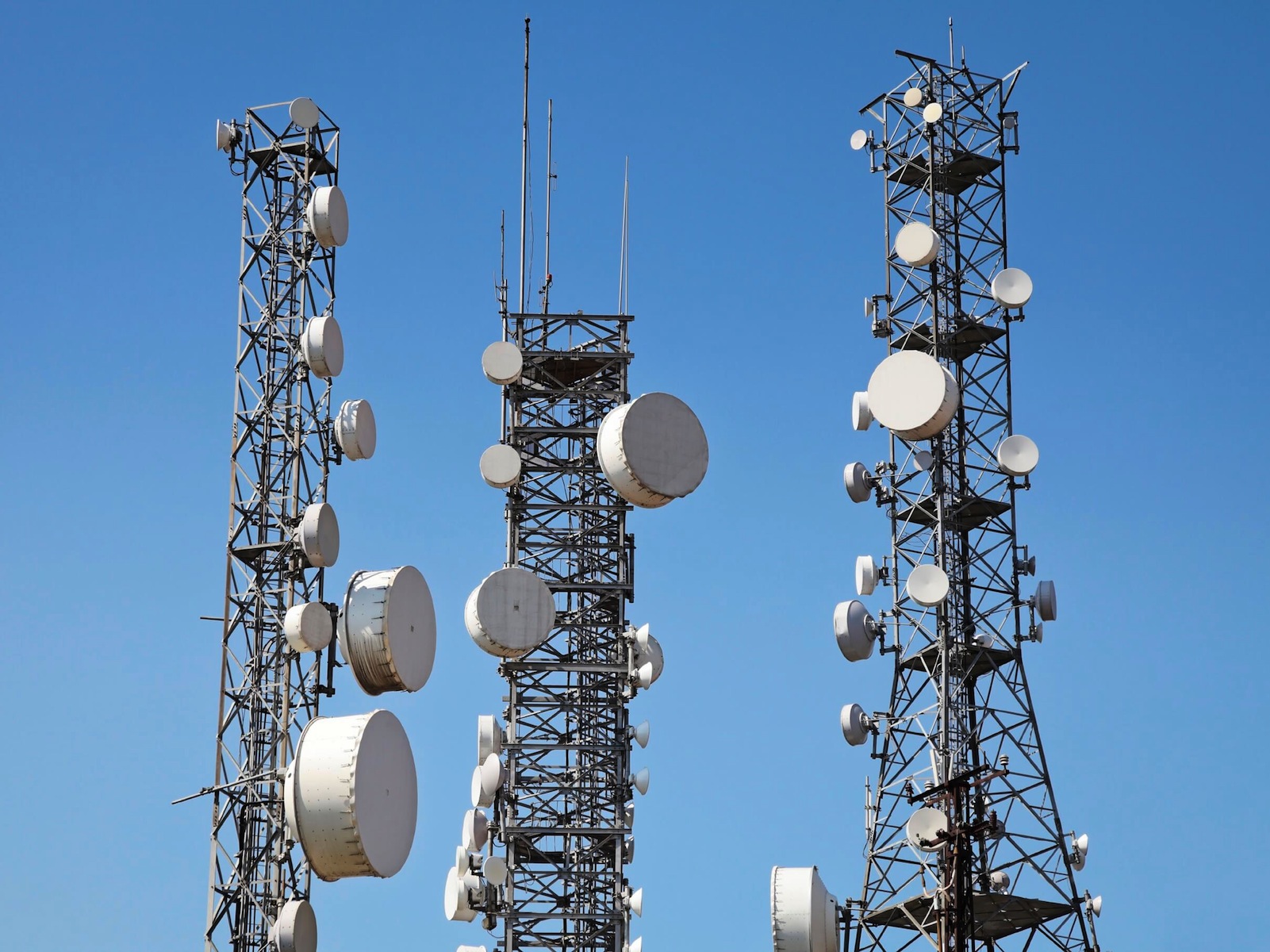 The recent surge in telecom M&A activity raises an important question: which acquisitions will create the most value for your company? Always important, mergers and acquisitions (M&As) have become essential among expansion-minded telecom players in Europe as organic growth opportunities begin to evaporate. Analysts currently project worldwide industry growth will fall into the 2.3 to 2.9 percent range through 2018, down from 4.4 percent during 2009–2012. One consequence of this decline: telecom players in the EMEA region (Europe, the Middle East, and Africa) have accelerated their M&A activities (Exhibit 1). However, while the industry is making more deals, are they the right ones? 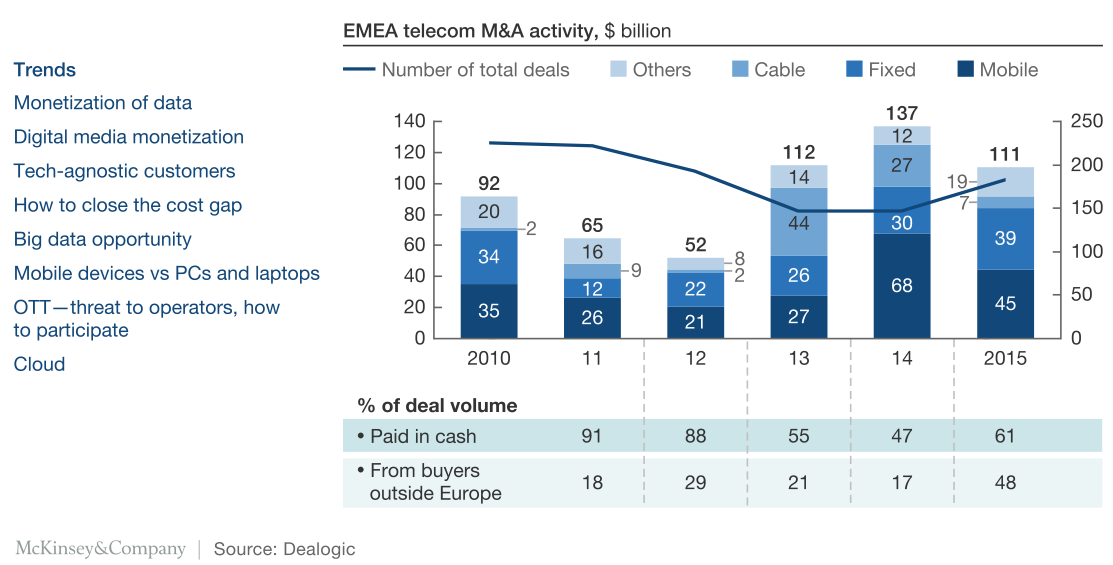 While successful telecom M&A deals all share important similarities (eg, expected positive outcomes and captured cost synergies), specific acquisitions tend to rise or fall according to the unique calculus that governs individual companies. A new heat map tool, supported by a comprehensive database, can help leaders choose the right acquisitions for the right reasons. The M&A heat map provides a first indication of potential deal scenarios, while the synergy database offers a granular set of ideas for developing outside-in value creation estimates based on benchmarks from recent European telecom mergers. The heat map–driven approach allows users to create an overview of the most likely scenarios in the European telecom market, enabling them to work through potential strategic moves and to zero in on the most compelling acquisitions. Choosing targets wisely is a must-have skill today, because leading telecom players have enough “firepower” (ie, balance sheet strength) to do significant damage if they misjudge opportunities (Exhibit 2). Globally, industry players currently hold combined cash firepower of €45 billion. 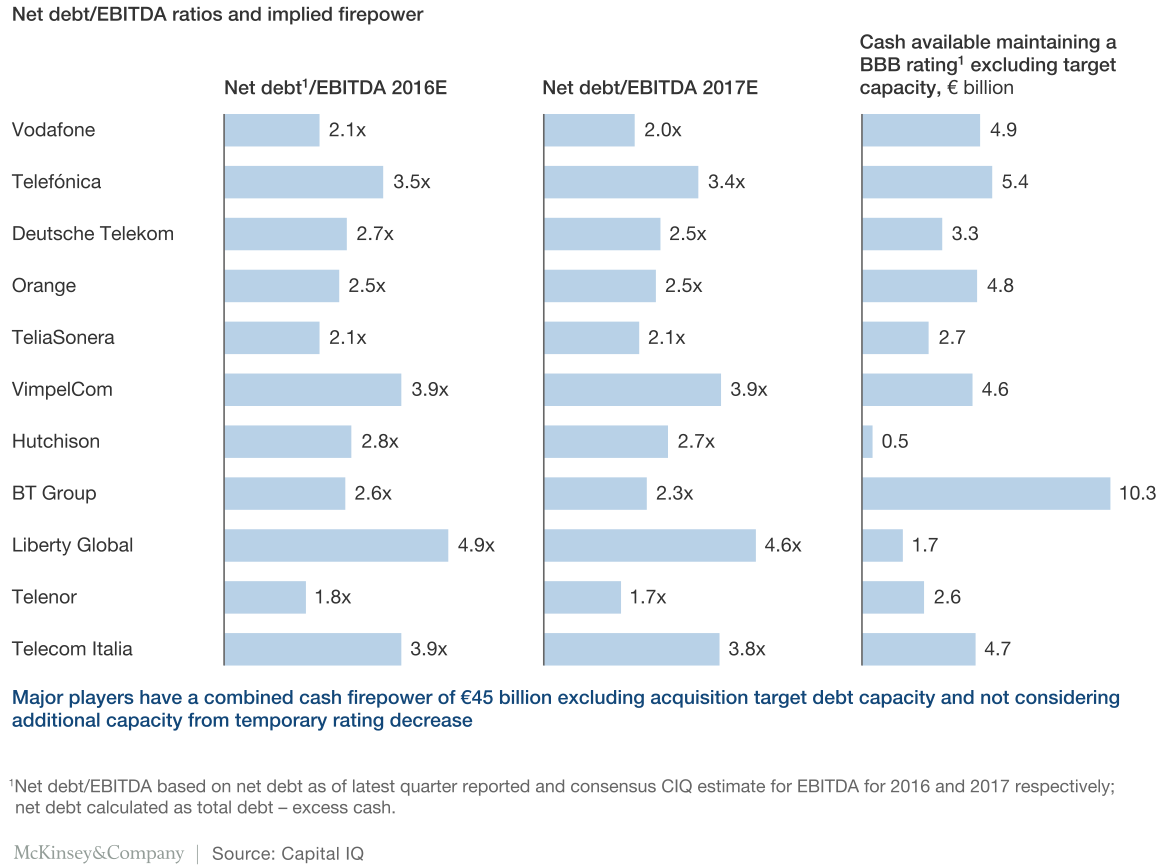 From trends to archetypes: Populating the heat map

Ideally, acquisitions should help operators address the major trends they face today, which often requires combined investments in future technologies that position the company in a leading industry role. In the EMEA region, these trends include finding ways to make money from data and digital media, and satisfying so-called “technology-agnostic” customers (eg, subscribers who demand seamless connectivity across platforms, systems, devices, and apps). Other important trends involve closing competitive cost gaps, capitalizing on big data, resolving the competition between mobile devices and PCs/laptops, finding effective ways to participate in the over-the-top (OTT) opportunity, and dealing with cloud computing. Based on these trends, the M&A screening approach establishes a number of M&A “archetypes” — overarching opportunities to address the identified industry trends — and uses them to create an M&A heat map. Typical archetypes identified by the process and supported by recent M&A activities include:

Each of the above archetypes reflects specific trends. For example, both data monetization and technology-agnostic customers tie in with fixed-mobile convergence, while digital media monetization links with cross-border consolidation. The resulting M&A heat map enables telecom players to work through the potential value each archetype offers (Exhibit 3), identify acquisition targets, rank the transactions in terms of likelihood and complexity, and understand the strategic consequences if other players acquire the targets.

The heat map reveals both past deals and future opportunities that align with each of the four archetypes. For example:

Fixed-mobile convergence. The matrix makes it possible to identify players with mobile and/or fixed-line operations, and to search for complementary local providers or multinationals with coverage in specific markets. In order to filter out markets with a high probability of complementary deals between operators that only (or predominantly) have either mobile or fixed-line operations in a market, companies can use the broadband-to-mobile market share differential to estimate the degree of fixed-mobile convergence. The higher the fixed-mobile convergence index, the less converged a respective market is from a fixed-mobile perspective (ie, the higher the likelihood of deals between fixed and mobile operators). For example, Ireland, Russia, and several Eastern European markets are currently the least converged telco markets in Europe from a fixed-mobile perspective. As such, these countries will likely see more deals between fixed and mobile operators, and/or convergent pressure (ie, bundled discounts), than markets that are further along this path, such as Finland, Spain, France, or Portugal.

The analysis also reveals other insights. For example, even counting recently announced or cleared deals, the UK remains one of the least converged key markets in Western Europe, followed by Austria, Norway, and Denmark (Exhibit 4). This could suggest the high probability of additional deals in these markets with the potential involvement of multinationals as well as local players. 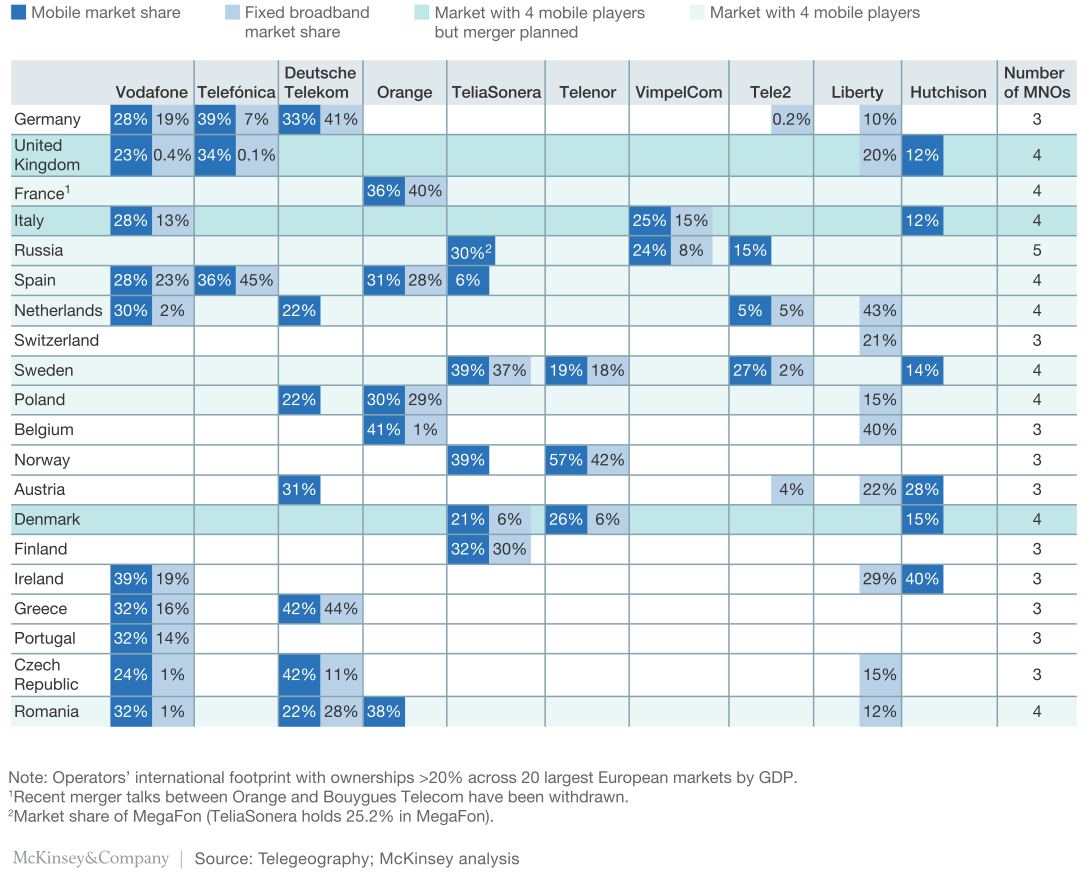 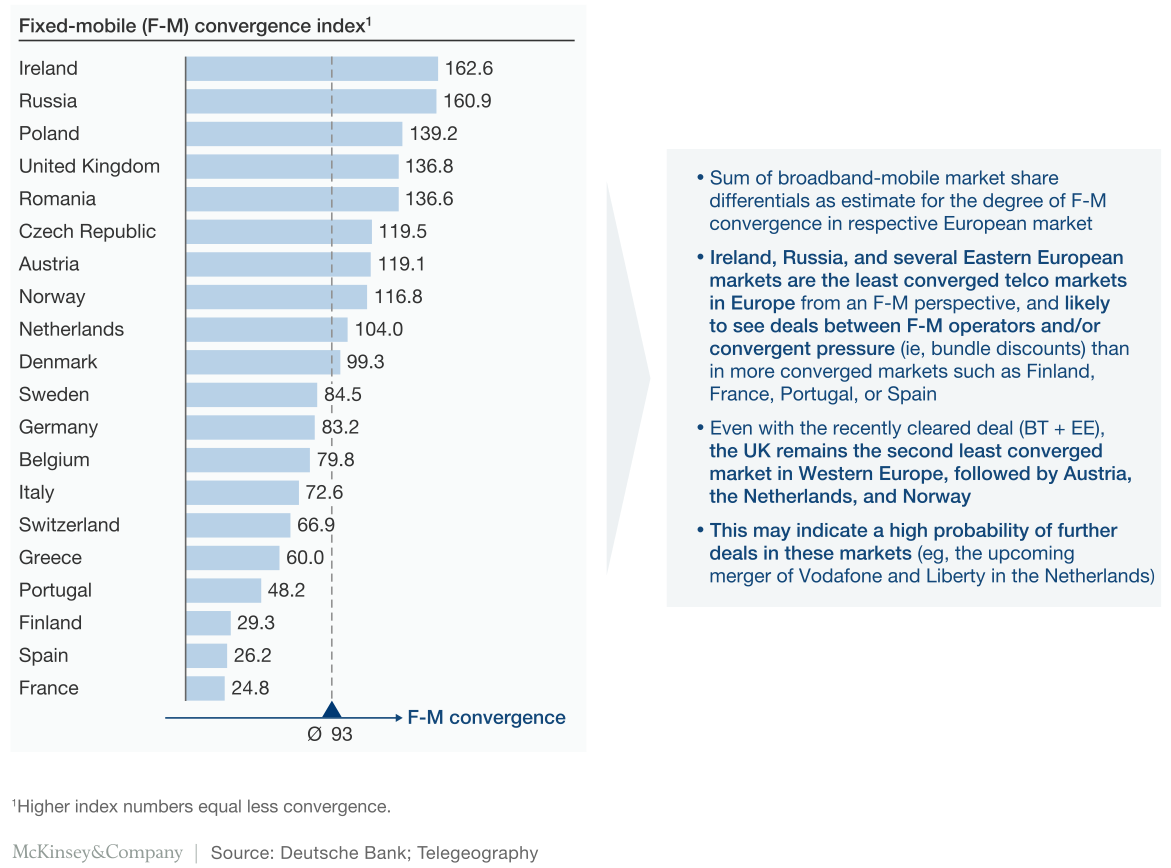 Local mobile consolidation. For telecom players interested in local mobile consolidation, the matrix allows them to investigate markets with more than three players where no evidence of emerging deals exists (concentrating on markets with over three players often enables companies to avoid potential regulatory constraints). It can provide additional information on the state of play in specific markets such as speculations on, for example, potential divestments. It also helps companies to identify the most likely target markets for consolidation, enabling them to run potential scenarios to evaluate possible strategies. To that end, it provides operator market shares, revenue growth, and recent EBITDA (earnings before interest, depreciation, taxes, and amortization) margins.

Experience suggests that cost synergies are the key driver for value creation. Depending on a deal’s depth of integration and the degree of transformative change it drives, companies can use the synergy database, which features more than 80 levers, to identify potential synergies that equal up to 30 percent of the combined operating expenditure (opex) baseline and over 15 percent of combined capital expenditures (capex).

Local cable consolidation. Huge differences exist across Europe in terms of cable penetration. For local cable consolidation opportunities, the matrix makes it possible to investigate markets that still have a large number of smaller independent cable players. For example, a variety of markets, including Poland, still exhibit high numbers of smaller cable players. The largest cable operator in Poland controls just under 40 percent of the market, while the market shares of the next four players range from 3.5 to almost 20 percent, and a contingent of even smaller players contribute the remaining 17.7 percent of the total market. Likewise, Belgium and the Netherlands have high concentrations of cable companies, making it worthwhile for potential acquirers to analyze the underlying cable players in terms of number and market shares. The analysis also reveals that still other markets, notably Greece and Italy, have no cable infrastructure at all and thus are irrelevant when it comes to developing consolidation scenarios (Exhibits 5, 6).

Cross-border consolidation. Companies pursuing cross-border consolidation can use the matrix to identify “white spots” globally where no multinational conglomerates currently operate (or may have assets to sell), or find potential business plays among local providers. While cost synergies are harder to obtain in a cross-border merger, high potential still exists, especially if companies choose to go beyond pure combinatorial measures. McKinsey’s synergy database features a collection of cross-border levers with total synergy potential of up to 20 percent of combined opex and over 15 percent of combined capex (not all levers would apply in all merger situations). 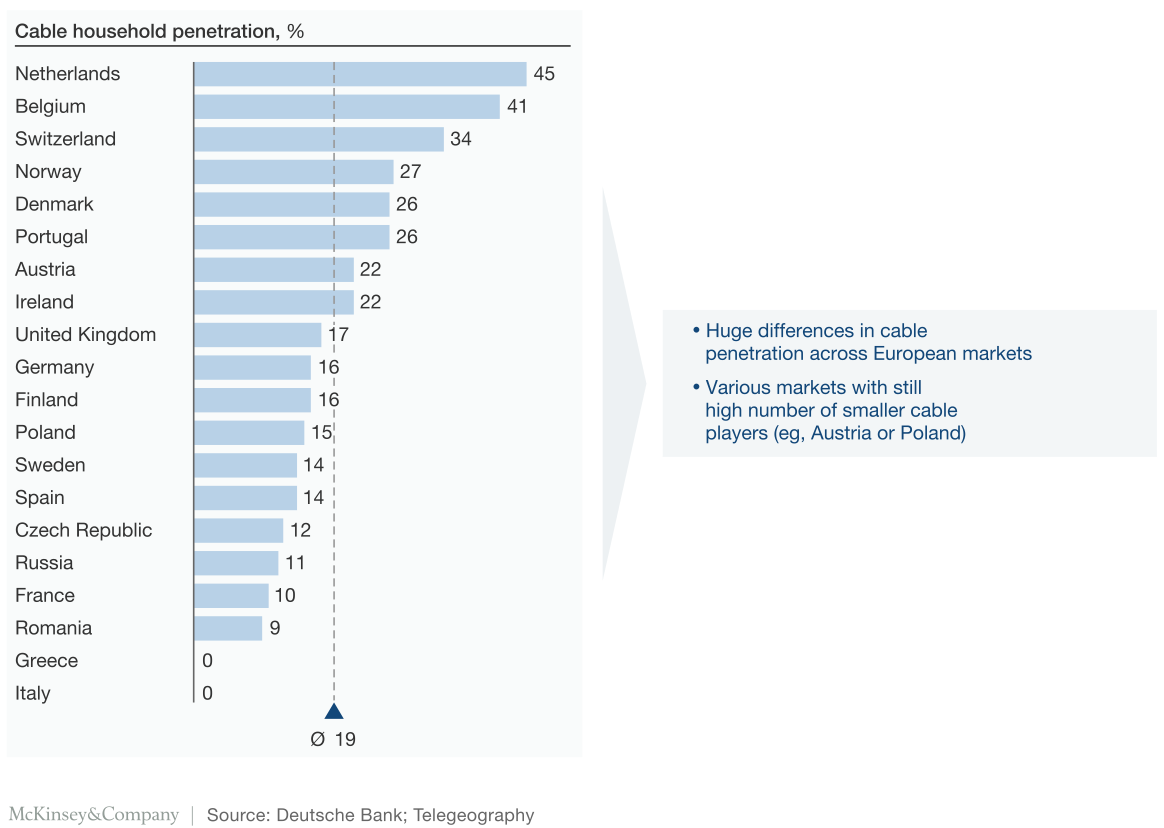 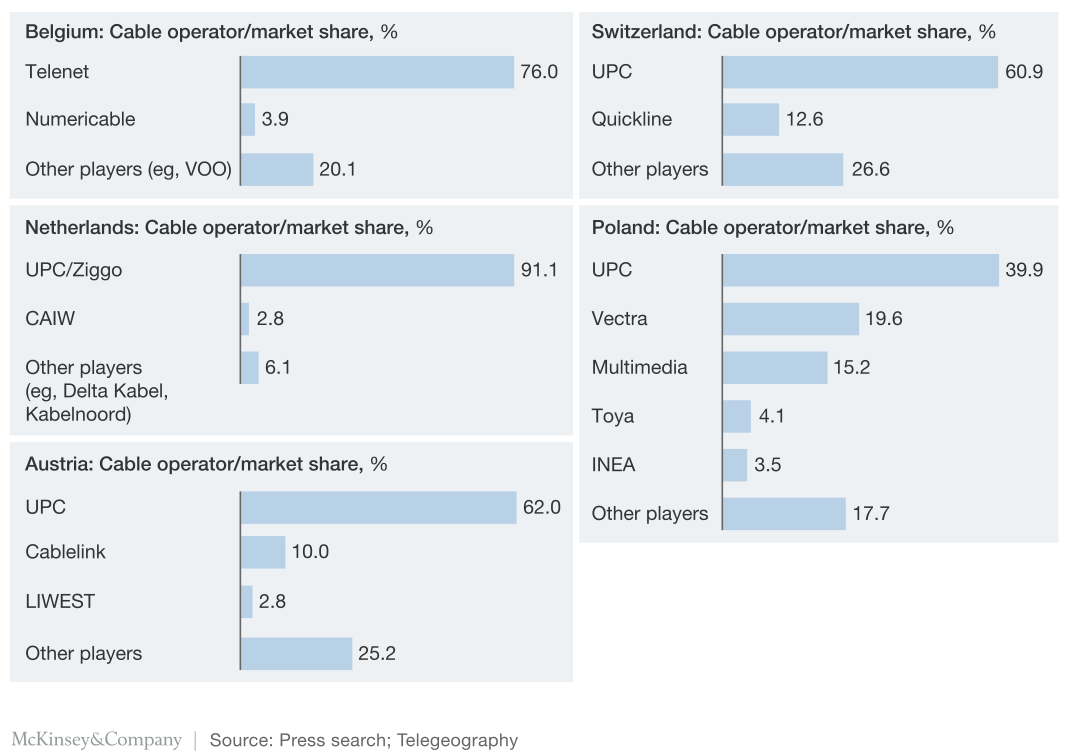 By analyzing the M&A archetypes, leaders can unlock the reasons why multinational telecom players engage with each other. Three archetypes can explain why some companies maintain continuous discussions with their peers regarding potential M&A deals across markets. First, the impulse to address mobile and cable convergence might lead to a strategy focused on creating integrated players with significant mobile and fixed market shares, giving the new entity a stronger competitive position compared to pure mobile or fixed operators. Second, the need to address the local cable consolidation archetype could enable two or more companies to consolidate their fixed assets in markets in which both companies currently participate in order to benefit from increased scale and the cost and competitive advantages it brings. And third, the urge to consolidate its assets on a cross-border basis could lead one company to extend its footprint in Europe, and both players to seek larger scale operations.

Regulation plays an unusually powerful role in the telecom industry, and its impact on M&A deals is no exception. Consequently, understanding the implications recent regulatory actions could have regarding telco M&A activities is a mandate for acquisitive industry players. One recent regulatory trend involves the increasing proportion of M&A deals approved with “conditions.” For instance, the percentage of M&A deals approved in the EU with conditions increased from 8 percent during 2004 – 2010 to 31 percent during 2010 – 2016. This growing trend recognizes the industry need for consolidation, and the reality that higher levels of concentration often require new remedies, which drives the increase in conditional approvals.

In addressing other effects that are detrimental to competition, the EU commission can take steps that go beyond market share considerations. An example that applies directly to telecom players involves concerns that a merger would create a high degree of “substitutability” (eg, the merger would limit output because the products of the two companies are perfect substitutes).

The M&A heat map and synergy database offers telecom players a new, more focused way to approach mergers and acquisitions. Based on an innovative screening logic and continuously updated to maintain accuracy, the approach can help leaders to identify seismic industry trends, translate them into actionable strategies, and work through the competitive implications of potential deals.