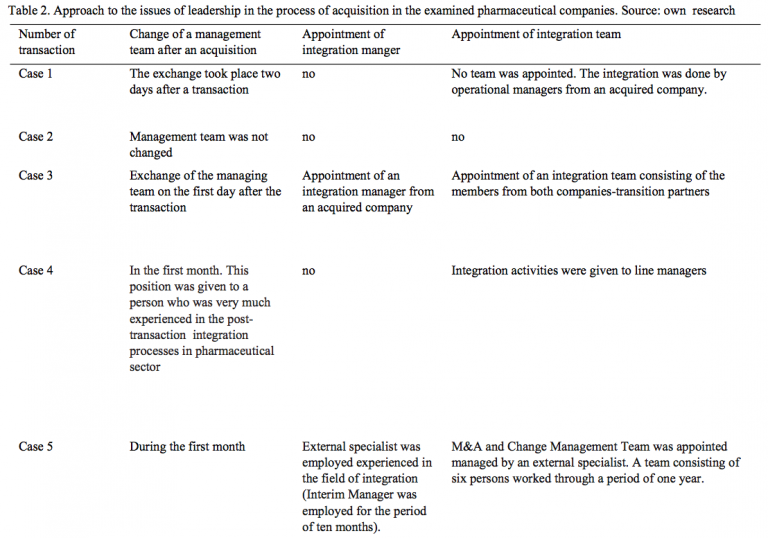 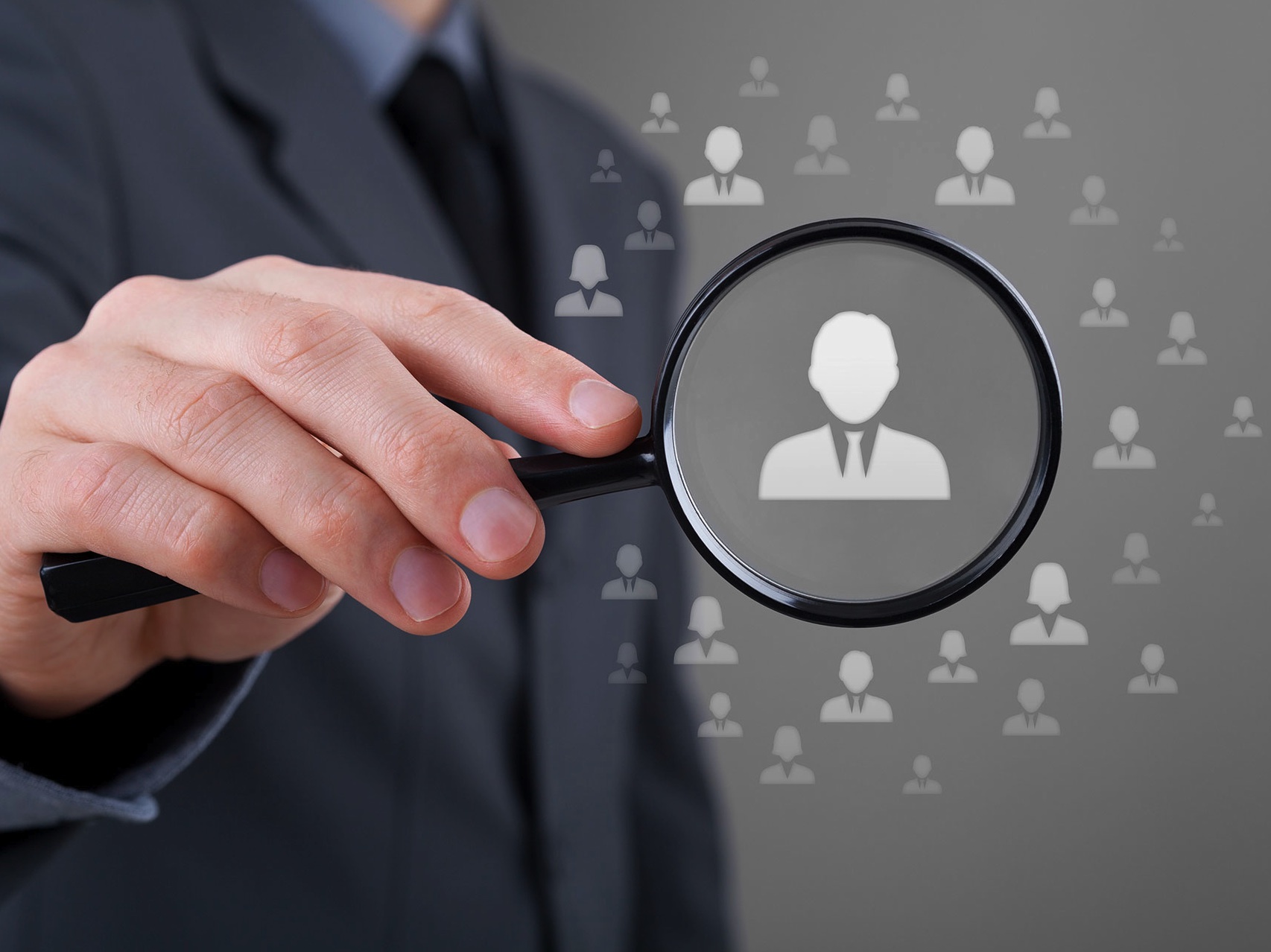 This paper presents the results of the research concerning five transactions in the pharmaceutical sector. The research aim was to diagnose an approach to the issues of leadership, which in the literature is often treated as a key success factor in the processes of acquisitions. The research showed that in the analyzed pharmaceutical companies which participated in the research little attention was paid to the issues of leadership. At the stage of due dilligence no audit of leadership competencies in the acquired company was carried out. The integration teams grouping the employees representing every transaction partner were rarely appointed. The integration processes which are of a key importance from the point of view of the transaction success are entrusted to line managers who are not prepared for them. In the companies in which the economic situation in the moment of the acquisition was not the best one, the board was changed within the first month after the merger and the CEO position was given to a person with experience in the processes of acquisitions. This fact has considerably influenced the dynamics of the integration of the merged companies and as a consequence a quicker realization of the defined transaction aims.

1. Leadership in the acquisition of companies versus a theoretical approach

The results presented in this paper are a part of a wider research conducted in the years 2011-2013 in five, deliberately chosen companies belonging to the category of the pharmaceutics producers. In every case the examined company was acquired three years before the research. In the literature it is considered that such a time perspective is optimal from the point of view of the evaluation of the conducted transaction. An induction research of case study type was used together with a triangulation of research methods. A technique of IDI-Individual In-Depth Interview with presidents/managing directors and a panel interview conducted with presidents/managing directors, directors/managers of economic units, development directors and the managers of the HR departments of the acquired organizations were used. A free-form interview with a structured list of the information which is required was used in case of line managers of the merged departments. The structure of the research sample is presented in table 1. The research tried to diagnose an approach to the issue of leadership, which in the literature is often considered as the key success factor of mergers and acquisitions. It would be necessary to find the answer to the following questions: 1. Are new managers in the positions of CEO appointed after mergers and in which moment do these changes take place? 2. How does a change in the position of CEO after a merger influence a dynamics of integration and as a consequence an implementation of the defined transaction aims? 3. What is the character of the integration (centralized, decentralized?) 4. Do the changes in the position of the integration manager depend on the phases of the post-transaction process?

From the point of view of achieving a synergy which is a determinant of the success in the acquisitions transaction, an examination of the staff competencies in the acquired company is really vital, already at the stage of the due diligence analysis. In the examined transactions this practice was never the case. In four out of five examined cases after a transaction a management team was changed. The moment in which the change took place is very important. In the described research a link between a pace of changing the staff from CEO level, the economic position of the company which is being taken over and the experience in the field of M&A was detected. If it was declared in the research that the financial condition of the company before the acquisition had not been the best one, then one of the first activities after a merger was a change of the managing team. This regularity was the case in two out of four examined companies in which the CEOs were changed. A construction of a new management team as well as a definition and an attribution of the new rules happened within 30 days after finalizing a transaction. In two of the described cases, within three years from the finalization of the transaction, the change in the position of the president and the managing director happened twice. In every case a new CEO had a previous experience in the mergers in the pharmaceutical sector. This approach influenced significantly the dynamics of the acquisition process and resulted in a visible acceleration of integration activities. For the need of an effective communication it is really crucial to appoint for a defined period of time an integration manager and to create a team which consists of the team members of both the organization which are being merged. In the analyzed transactions in three out of five cases neither integration manager nor an integration team were appointed. The burden of conducting an integration in the single units was put on the line managers. In the interview it was underlined that line managers were not able to face the challenges created by the acquisition process the more so that in the majority of cases they fell into the category of acquisition opponents. In case of two examined companies it resulted in a problem of leaving an organization by the line managers, responsible for integration. 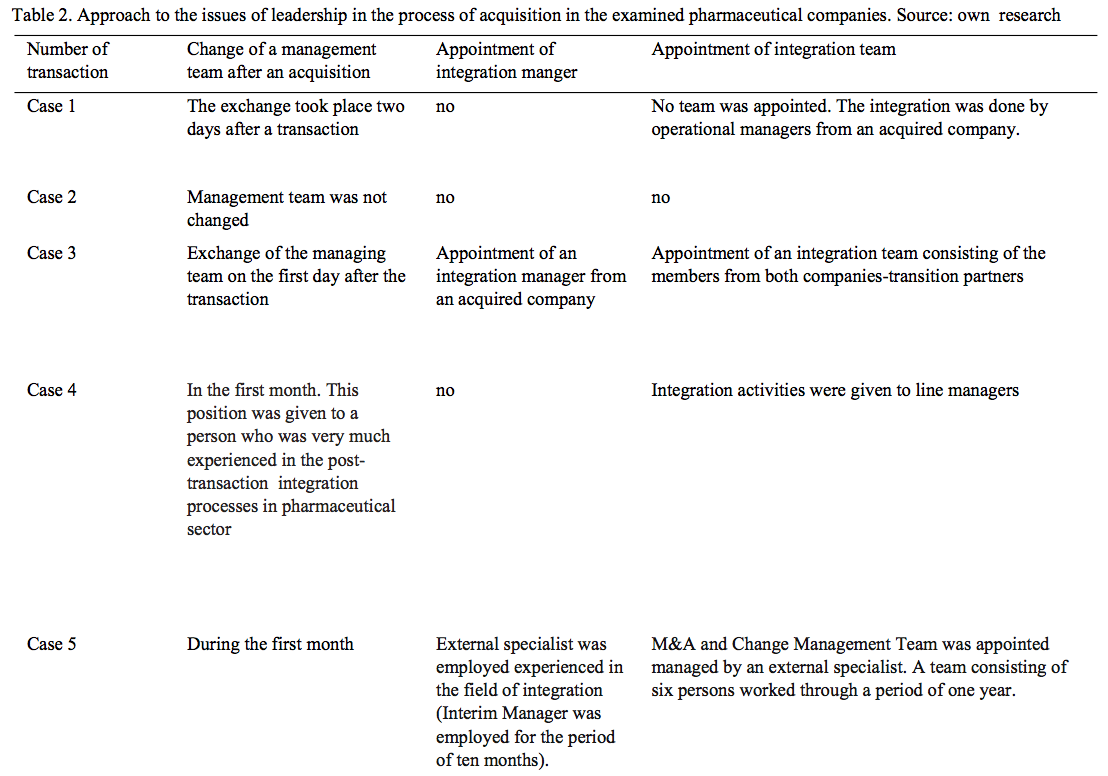 In the literature it is often underlined that the leadership is a key success factor in the processes of the companies acquisitions. The research showed that in the analyzed pharmaceutical companies not enough attention was paid to the issues of leadership. At the stage of due diligence in none of the cases was the analysis of the leadership skills conducted. The integration teams were also rarely appointed; those processes were attributed to line managers of the functional areas whose level of competencies was not known. The acquisition is a complex, multi-stage process in which it is very difficult to foresee potential threats. However, it is obvious that going through a period of significant changes implied by the discussed transactions requires a leadership on every level of management. A lack of a clear leadership results in chaos, conflicts and a decrease of an engagement and as a consequence impedes the implementation of the defined aims and increases the risk of the described transactions. It seems that this problem requires further research. It would be important to analyze all the dependencies between a type of leadership and the achieved results of the acquisition processes.